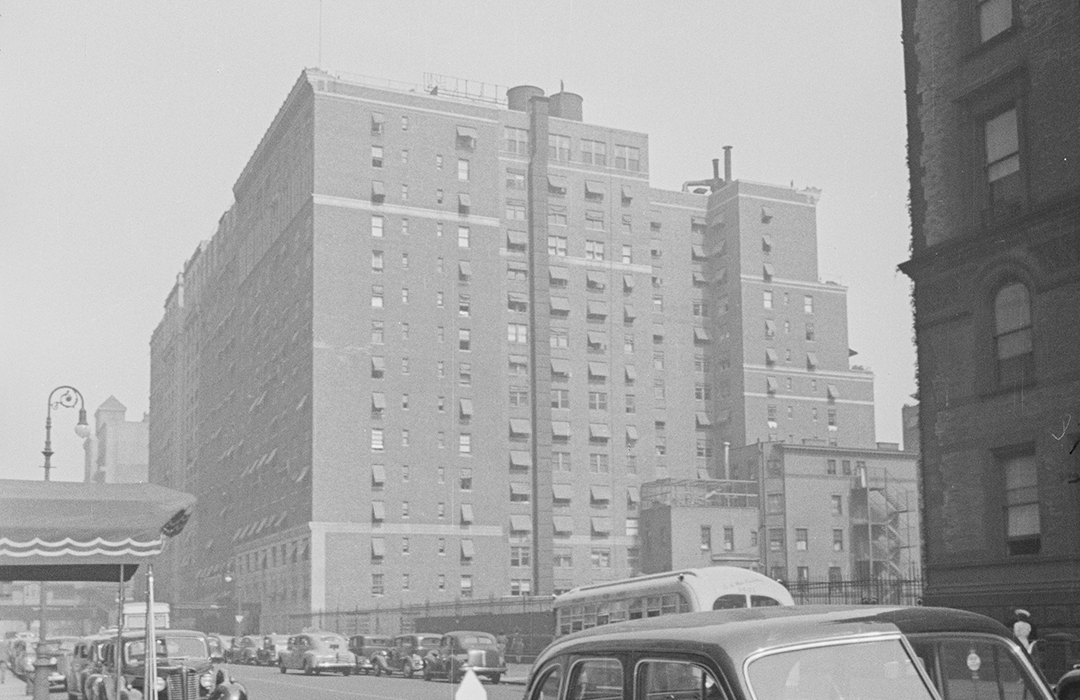 The Olcott Hotel attracted professional, moneyed residents.  Among the first were Sol Bashwitz, described by The New York Times as a “wealthy retired wholesale clothier,” and his wife.  In May 1929, the couple returned from Europe and three weeks later Bashwitz made an appointment to meet with his attorney, Harry S. Sondheim, in the apartment at 4:00.  It was a convenient time since Mrs. Bashwitz would be out visiting their daughter on West 86th Street.

At 4:00 on June 4, the front desk telephoned the apartment but received no answer.  After several more attempts, Sondheim and a bellboy went to the apartment with a passkey.  They found the 56-year-old lying on his back in the smoking room with a bullet wound through the heart.  A .32-calibre automatic pistol lay at his side.  While the family insisted it was murder, there was no evidence to suggest anything but suicide.

At the time, Sol Anderson and his wife lived here.  He had retired in 1920 after running a florist shop at 71 Broadway for 25 years.  He was better known to New Yorkers as the Captain of the Old Guard.  Perhaps the city’s most venerated military organization, it was formed in 1826 as the Tompkins Blues.  Over the decades, it had served as honor guard at the funeral of President James Monroe and traditionally was present in all Gubernatorial and Mayoral events, such as inaugurations.

If two plays opened on the same night, Mayer would buy four tickets and give two away so as not to break his streak.  A bachelor, he had attended more than 5,000 performances.

Among the most colorful residents was George Mayer.  Like Sol Anderson, he was retired, having been a partner in the Strouse-Adler corset company until 1927.  He was known as a “perfect first-nighter.”  On October 16, 1930, The New York Times reported, “For forty-eight years, with the exception of his absence on a trip to Europe several years ago and to Honolulu nine months ago, Mr. Mayer never missed a first night in New York, which was the place of his birth.”  If two plays opened on the same night, Mayer would buy four tickets and give two away so as not to break his streak.  A bachelor, he had attended more than 5,000 performances.  The New York Times added that he “had never been late or left before the final curtain.  He always bought the same seats, A1 and A3, which, though aisle seats, he refused to exchange, in order not to disturb others.”

Antonina Marco was the widow of a coal dealer.  While she was at the Blackstone Hotel at Miami Beach on February 13, she removed $40,000 of her jewelry from her safety deposit box in the hotel vault.  It turned out to be a fortunate move.  The following day five “cool bandits,” as described by The New York Sun, “selected sixteen of the eighty-two deposit boxes…including Mrs. Marco’s, and walked out with a total of nearly $200,000 in jewelry and cash.”  Antonina Marco lost a string of pearls with a diamond clip, and four diamond bracelets—in all $100,000 in jewelry and $2,000 in cash.  (That amount would equal about $1.9 million today.)

Back in New York, her luck would not improve.  On the evening of June 15 Antonina was invited to the apartment of Bessie Williams at 135 West 79th Street for a “friendly card game.”  While the women were playing, three men knocked on the door and the maid let them in.  Saying they were from police headquarters and were responding to a complaint of “the noise of a roulette game,” the men started searching the apartment.  Suddenly they turned to the elegantly-dressed women and declared, “This is a stick-up.”

View of the Hotel Olcott 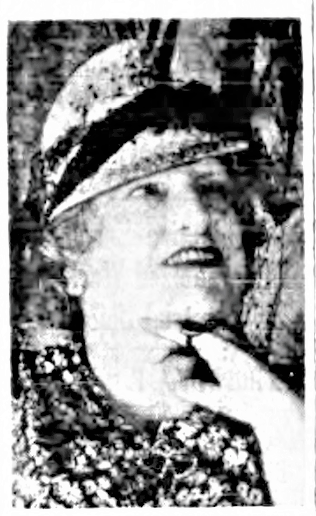 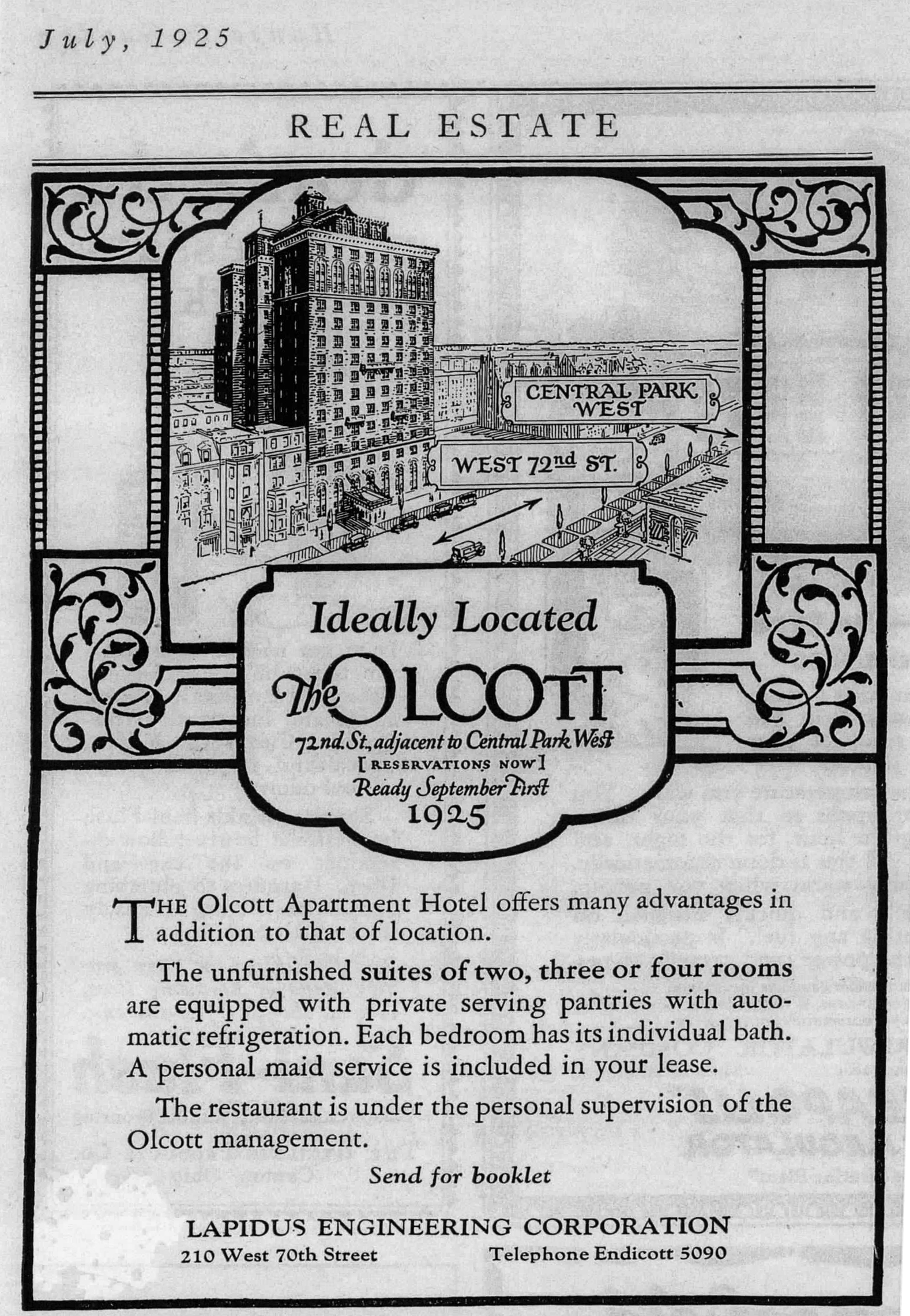 The New York Sun reported, “Apparently some one had put the finger on Mrs. Marco because they were most interested in the jewelry and money she had.  The others won scant attention.”  The newspaper said she the robbers “divested her of three rings valued at $6,000, a $1,500 wrist watch and $700 in cash.”

Another interesting resident was attorney Abraham Felt, a member of the bar since 1912.  Born in Jersey City in 1881, he had a broad resume.  A 32nd degree Mason and a past master of the National Lodge of Masons, he was a composer and poet as well.  He and his wife, the former Dora Mandell Felt, maintained a summer home in Deal, New Jersey.  On August 8, 1957, he suffered a fatal heart attack on the train back to New York from Deal.

While most apartment hotels had been converted to apartments by the last decade of the 20th century, the Hotel Olcott hung on.  Joseph Berger, writing in The New York Times on April 25, 1992, said, “It is not really a hotel you can check into for the night.  Many of its 240 residents checked in 30 years ago and never repacked their suitcases.  It is a residential hotel, an apartment house mostly for lazy people who do not want to make beds, cook dinner or buy furniture.”

“Many of its 240 residents checked in 30 years ago and never repacked their suitcases.”

Monthly rent for a four-room suite at the time was $3,000–the equivalent of $5,500 today.  Among the “lazy” residents in 1992 were entertainer Tiny Tim, Academy Award winning actor Martin Balsam, and Franco-Russian ballerina Nina Youshkevitch.  Berger’s article said, “Madame Youshkevitch raised her son, Robert, in the Olcott.  She felt secure about his coming home from school and fortunate that he had Lincoln Center within a short walk.  She even found the hot plate adequate for steak and vegetables they ate.  ‘We made big dinners,’ she said.”

By 1996 a Dallas BBQ Restaurant occupied ground floor space.  It became a thorn in the side of its West 72nd Street neighbors.  The restaurant was flooded with noise complaints.  One of the owners, Greg Wetanson, fired back, “We’re a family restaurant.  I don’t have young punks.  I have wonderful customers.  And I try to do what I can for the community.”

The end of the line for the residential hotel came in 2005 when Brack Capital and Stellar Management converted the building to condominiums.