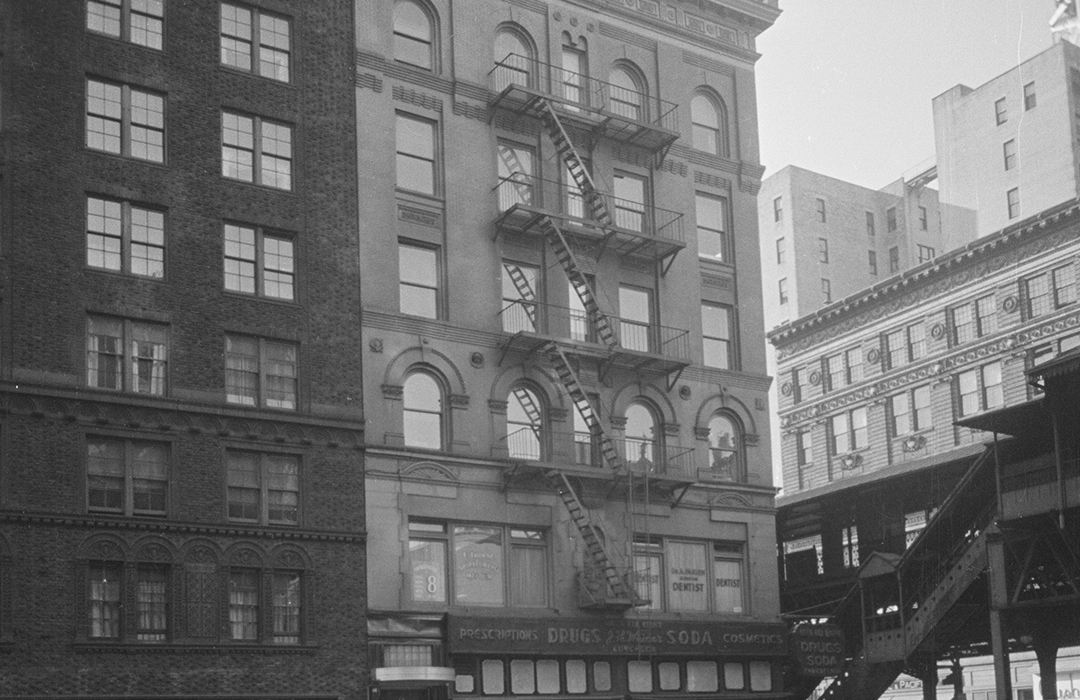 Terence Farley was among the pioneer developers of the Upper West Side, the Record & Guide calling him “one of the most active builders in this city.”  In 1888, he began construction on an apartment and store building on the southeast corner of Ninth Avenue (soon renamed Columbus Avenue) and West 72nd Street.  The four upper floors would hold high-end apartments, the second floor six offices and a “bachelor apartment,” and there would be four stores at ground level.

The equally proficient architectural firm of Thom & Wilson had designed a blend of the Romanesque Revival and Renaissance Revival styles for the upscale building.  Its residential entrance would be located at 58 West 72nd Street, with a second doorway that accessed the second floor on Columbus Avenue.

Farley would not live to see his project completed.  His business was taken over by his sons, John T. and James A. Farley who forged on with the building.  The structure, called The Adrian, was completed in 1889.  Upper West Side apartment buildings often were given enigmatic names—like the Viola and the Sylvia, for instance.  The Adrian, however, was almost assuredly a tribute to a real deceased little boy.  At the third floor on the Columbus Avenue elevation are two terra cotta plaques with touching bas relief portraits of young boys, about three years old, dressed in Victorian garb–possibly the same child.  They may be a silent memorial.

The residential entrance on 72nd Street was graced by a granite columned portico through which residents entered a 45-foot long hallway.  “It is lighted by means of a stained-glass ceiling, looking out on a courtyard, which runs to the top of the building, and which also gives light to all the rear windows of the various suites of apartments above,” said the Record & Guide on April 27, 1889.  There were two apartments per floor, each with nine rooms including “reception, music, dining and drawing rooms,” three bedrooms, a servant’s bedroom, a “bathroom with all the conveniences,” and a well-appointed kitchen.  The reception rooms, according to the journal, “are handsomely fitted up with mantels of special design, with mirrors and fireplaces, andirons, etc.  The walls are covered with cartridge paper and the ceilings are decorated.  There is no attempt to be gaudy, nor is there anything to offend good taste.”

Women across New York were no doubt shocked at her admitted extravagance.  On September 23, she was asked by a lawyer how often she wore a dress before she considered it useless.  She replied, “Five times; sometimes not so often.”

The initial tenants of the ground floor stores were H. A. Casebeer’s pharmacy, a real estate office, decorator shop, and a Western Union Telegraph Company office.  Terence Farley’s Sons moved its offices into one of the second-floor offices.  Other tenants on that level were also involved in the construction industry, including builders Francis Crawford, C. W. Luyster, and architect Ralph S. Townsend.  The Record & Guide pointed out “The Adrian is now managed by [Terence Farley’s] sons, who have resolved to hold the property as an investment for the estate.”

Among the early residents were the W. H. Busteed family.  Their son, Joseph, attempted to show off his wealth and sophistication on September 4, 1893, with disastrous results.  The Sun reported that the 21-year old “took three young women into the Manhattan Cafe on Monday evening and ordered a $15 dinner.  At the conclusion of the meal, he ordered cigars for himself and 90 cents’ worth of cigarettes for his companions.  Then he told the waiter to ‘chalk it up.'”  (Joseph’s bill would be about $475 today.)

Joseph’s grandiosity came to a quick and humiliating end.  The manager, John Dunson, refused to give him credit.  Busteen explained he had no money, and while his female companions did have cash on them, The Sun said “they declined to part with it.”  Busteen was arrested.  When he appeared in court two days later, his father paid for the dinner and the young man was allowed to go free.

By 1897, the family of Eugene V. N. Bissell, a member of the auction firm E. Bissell & Son, lived in The Adrian.  He and Mary Valentine Yale had married in 1888 and the couple had three children.  According to the New York Herald, they had “two servants and a maid.”  Unknown to her husband, Mary was spending lavishly.

Mary was forced to testify in court when the furriers Revillon Freres sued for unpaid bills.  Women across New York were no doubt shocked at her admitted extravagance.  On September 23, she was asked by a lawyer how often she wore a dress before she considered it useless.  She replied, “Five times; sometimes not so often.”

The Morning Telegraph said of Mary, “She soon acquired a reputation as a spendthrift and was known as ‘the Lady of Violets,’ owing to her fondness for adorning herself with the small but most costly blossoms…Mrs. Bissell was noted for her beauty.  She was a large, handsome blonde and frequently covered herself completely with violets.”

The publicity ruined Bissell.  His father forced him out of the business “on account of my wife’s extravagance,” he explained.  He divorced Mary, who quickly remarried by 1899. 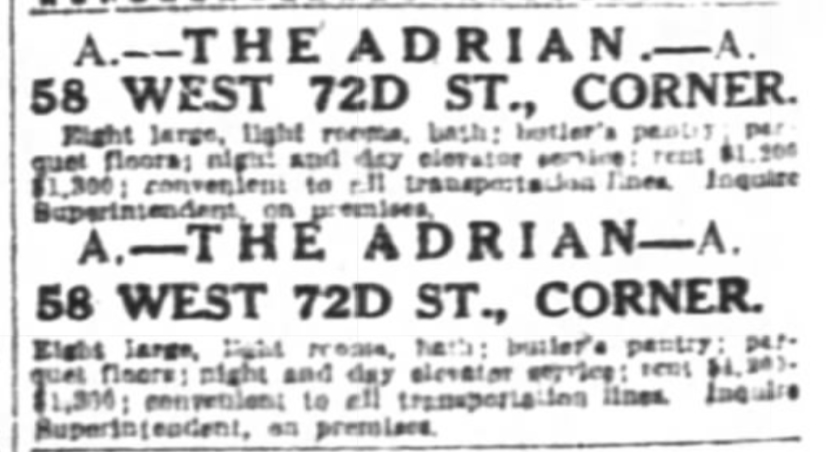 Advertisement for The Adrian 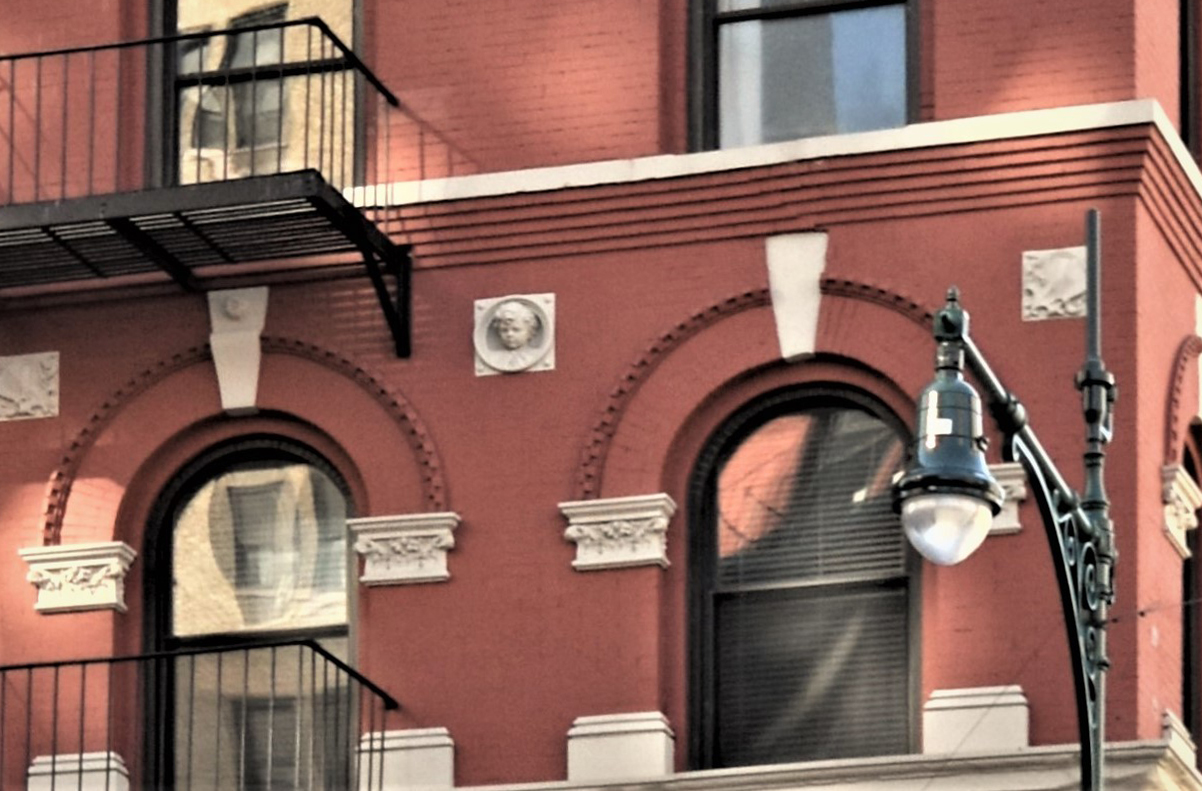 Image Courtesy The Daytonian in Manhattan

Another tenant who garnered unwanted publicity was stockbroker Ross Miller Turner.  On May 17, 1903, he took a drive in Central Park in a runabout (a one-horse vehicle similar to a buggy).  Suddenly his horse shied and fell.  In doing so, it knocked Madeline Neubeck, a dressmaker, to the pavement as well.  “The horse kicked her in the leg, but she was not badly hurt,” reported The Sun.  An ambulance surgeon (the equivalent of today’s EMT) dressed her wounds and everyone went on their way.

Turner’s name was back in the newspapers the following year.  Just as today, weekend crowds headed to the beach were significant.  On Sunday August 21, 1904, the 31-year old waited for the elevated train to Coney Island with a friend, Newell Blass.  The Daily Standard Union said, “Mr. Turner and Mr. Blass made two of an immense waiting crowd.”  When the train pulled in, it was packed so Turner “tried to get a seat on an “L” train by jumping through a window.”  He was immediately “hauled out” by a policeman.  Blass bailed him out of jail.

When he appeared in court to pay his $3 fine, the judge reprimanded him severely.  “I should think that you, an evidently well-educated and apparently sensible man, would be deeply ashamed of having shown such greed for a seat.  In a crowd such as goes to Coney Island on Sunday afternoon, it is the place of such men as you to set an example.  Consider the result, if all men of your pattern acted as you have done.”

By 1912 opera singer Bertrand de Bernyz used his apartment as his vocal training studio.  In an advertisement in September that year, he called himself “the renowned European Grand Opera and Concern Singer and Director.”  Within three years, he used the apartment as well as the headquarters of the Bertrand de Bernyz Opera, Oratorio and Concert Society, which gave concerts at the Hotel Majestic.

He was also the president of the American Opera Organization, “founded to aid needy American talent and to provide opportunities for the same,” according to the New-York Tribune.  Among those was Roland-Douvall de Martinez-Campus whom de Bernyz described as “a great tenor voice of exceptional quality and volume, who has all the qualifications necessary to become a successful rival to Caruso.”  The New-York Tribune announced on March 21, 1915, “Professor de Bernyz invites all interested in hearing this newly discovered voice…to attend the public operatic rehearsals held every Saturday afternoon at 5 o’clock in Studio Hall, 58 West Seventy-second Street.”

On May 29, 1921, the Daily News reported “King Solomon was outdone by Magistrate John E. McGeehan in West Side Court yesterday.  When a controversy, based on the age-old theme, ‘who gets the child?’ came before the Magistrate, he settled it by taking the child into his own custody.”

De Bernyz became involved in a tangled custody case in 1921.  Among his students was 11-year-old Bessie Connell Harring, “a singer whose voice can reach above high C,” according to the Daily News on May 29.  She had lived with her widowed father, Thomas H. Cornell, an engineer, until he became seriously ill and was confined to the Harlem Hospital.  Bertrand de Berynz agreed to take the girl into his care.

But Bessie’s maternal grandmother, Martha Connell, had other ideas.  After the girl disappeared from The Adrian, she was found with Mrs. Connell.  (Martha was charged with disorderly conduct for the kidnapping.)  The grandmother insisted she wanted custody because “she loves her granddaughter as much as anybody.”  De Bernyz accused her of wanting to start her “on a professional career now.”

On May 29, 1921, the Daily News reported “King Solomon was outdone by Magistrate John E. McGeehan in West Side Court yesterday.  When a controversy, based on the age-old theme, ‘who gets the child?’ came before the Magistrate, he settled it by taking the child into his own custody.”

In 1935, one of the second-floor offices was leased by dentist Alex Paigen.  At around 11:00 on the morning of December 3 four young men entered.  One told the assistant, Rae Sharet, he needed dental attention.  Dr. Paigen was working on a patient, so the men calmly read magazines until the patient left.  They then pulled out guns.  The New York Times reported they “held up the dentist and his assistant, binding them to chairs with twine.”  They took $35 from Rae’s purse and $160 from the doctor’s wallet “and walked quietly down the stairs and into Seventy-second Street.”

The Adrian was renovated in 1938, resulting in five apartments per floor.  That configuration lasted until 1998 when a penthouse level, invisible from the street, was added.  Once again, there were two apartments each on the third through fifth floors, and three duplexes above.

In the meantime, a Chirivari store occupied on of the ground floor spaces for at least a decade, beginning around 1980.   Another space was occupied by Diane’s, which offered one of “the best choices for hamburgers,” according to The New York Times food critic Mimi Sheraton on December 31, 1982.  In December 1997, Ordning & Reda opened a store in No. 253 Columbus Avenue.  Its wide variety of stationery products–diaries, address books, portfolios, photo albums and such–were designed and handmade in Sweden.

Although the ground floor shops have been extensively altered, the upper floors of The Adrian are strikingly intact, including the haunting portraits of two young boys who have looked out onto Columbus Avenue for 130 years.