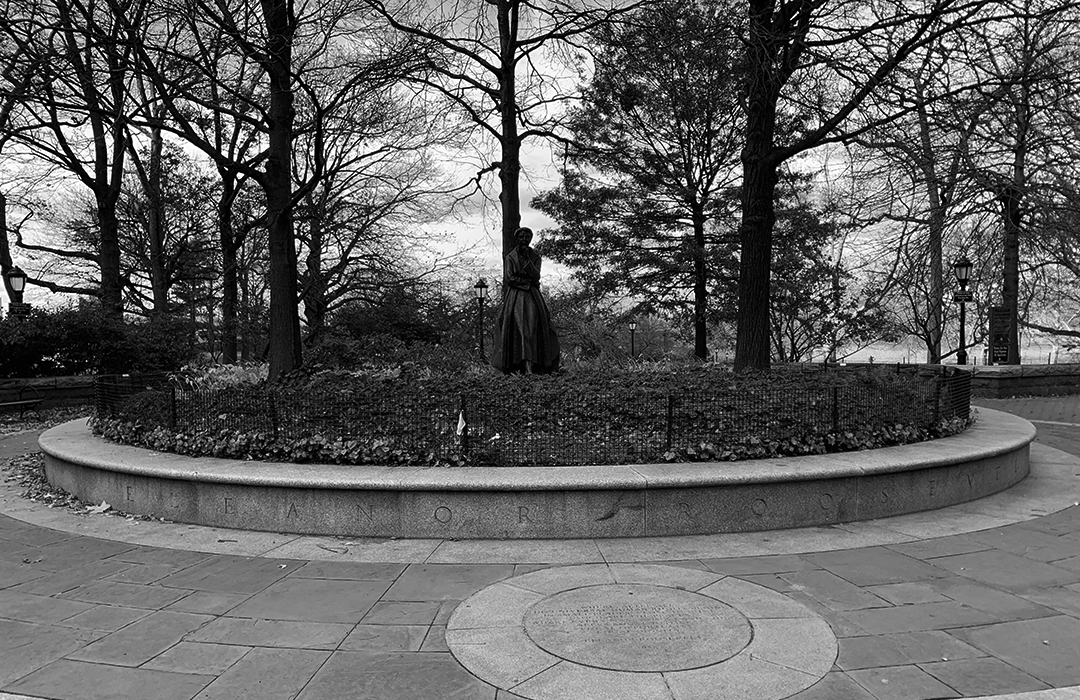 Although Anna Eleanor Roosevelt was born to a socially prestigious family in 1884, her interests were far removed from the endless teas, dances and dinner parties expected of a turn-of-the-century debutante. Instead, upon returning from finishing school in England, she volunteered as a social worker in the slums of the Lower East Side. After she and her fifth cousin, Franklin Delano Roosevelt, began seeing one another, she walked him through the deplorable tenement district of Five Points so he could see for himself the living conditions of the poor.

Years later during the Great Depression she would repeat the walking tour with her young son, Franklin Jr., taking him among the shanties erected in Central Park so he could appreciate the intense needs of the underprivileged.

Eleanor’s humanitarian concerns broadened and she used the influence she gained through her husband’s political successes as a means to forward her causes. Unafraid of the term “activist” she walked picket lines, lobbied for civil rights, and spearheaded women’s rights causes. Her focus on basic human rights was such that she once lashed out at the planners of city housing projects who wanted to save money by eliminating seats from the toilets. Roosevelt decried the insult to the human dignity of the residents.

Eleanor Roosevelt died on November 7, 1962. Her rich life history included fights against sweatshops, appointment as delegate to the United Nations, and ceaseless battles for women’s and racial equality.

In March 1986, Roosevelt admirer Herbert Zohn, who lived near Riverside Park, noticed the disheveled condition of the Park around 72nd Street and envisioned a revamped section of park that would include a memorial to the intrepid former First Lady.

The artist envisioned Roosevelt not in a traditional, stately pose; but natural and contemplative. Mrs. Roosevelt would be depicted deep in thought, leaning against a boulder in the park’s open air, ankles crossed beneath her long skirt and coat, and her chin resting on her hand.

A national competition was held with the commission going to Penelope Jencks. The artist envisioned Roosevelt not in a traditional, stately pose; but natural and contemplative. Mrs. Roosevelt would be depicted deep in thought, leaning against a boulder in the park’s open air, ankles crossed beneath her long skirt and coat, and her chin resting on her hand.

Jencks used Phoebe Roosevelt, Eleanor’s great-granddaughter as the model for the torso. The young model later said she was picked because she has the Roosevelt slouch. The artist discovered after months of looking that there was no perfect boulder and that rather than rely on Mother Nature she would have to shape one herself. Giuliano Checchinelli carved the black granite rock to Jencks’ specifications.

On October 5, 1996 the 8-foot bronze statue was unveiled with remarks by then First Lady Hillary Rodham Clinton. Mrs. Clinton had often spoken of her sense of connection with Eleanor Roosevelt; leading her to sometimes “speak” to the former first lady in times of stress. Thirty-five Roosevelt family members were in attendance, including Franklin D. Roosevelt III.

Part of the $1.3 million project was a new walkway inscribed with quotations by Mrs. Roosevelt and Adlai Stevenson. Stevenson’s tribute reads “She would rather light a candle than curse the darkness and her glow has warmed the world.”

The quotation from Eleanor’s March 27, 1958 speech to the United Nations Commission on Human Rights is “Where, after all, do universal human rights begin? In small places, close to home. Such are the places where every man, woman and child seeks equal justice, equal opportunity, equal dignity.”