A Stellar Year for LW’s Youth Education Program, Keeping the Past for the Future!

The 2009-2010 school year has been a Landmark year for LW’s decade-old youth education program, Keeping the Past for the Future (KPF). The number of students experiencing KPF has sky-rocketed in a few short years.  This year, we have worked with 1,600 students in 66 classrooms in 11 Upper West Side schools for a total of 229 invdividual class sessions, compared to only two years ago when we worked with 1,000 students in 43 classrooms for a total of 133 sessions. We were thrilled to partner for the first time with PS163 (163 West 97th Street) and the Professional Childrens School (132 West 60th Street)! 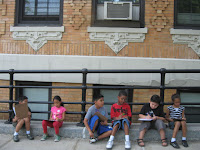 Highlights of this year include:
Fifth Graders from PS145 (150 West 105th Street) studied the storied history and architecture of the former Towers Nursing Home.
Fourth Graders from PS87 (160 West 78th Street) looked at the West End Collegiate Church as an example of Dutch Revival architecture for their unit on New Amsterdam.
Third Graders from PS75 (735 West End Avenue) worked together to create poems inspired by the Cliff Dwelling (left).
KPF is a central part of our mission to preserve the architectural heritage of Manhattan’s Upper West Side.  In studying and exploring their own surroundings as they were and as they are today, students relate history to their own world of home, school, and neighborhood.  By learning to “read” and understand the built environment that they experience everyday, students acquire a sense of ownership toward their surroundings.  KPF truly brings the neighborhood to life!