On the UWS: A Sugar Bowl Evokes a Long-gone Era

An elaborate 1892 Gorham double–lidded nickel-silver sugar bowl that was recently sold online may be among the only tangible relics that remain of the Hotel Regent-Sherman Square Hotel, once located between 70th and 71st Streets and Broadway. This sugar bowl provides hints to both the sweetness of exalted ambitions and creative efforts as well as to the turbulent times that, in the end, led this UWS hotel to be demolished in 1968. 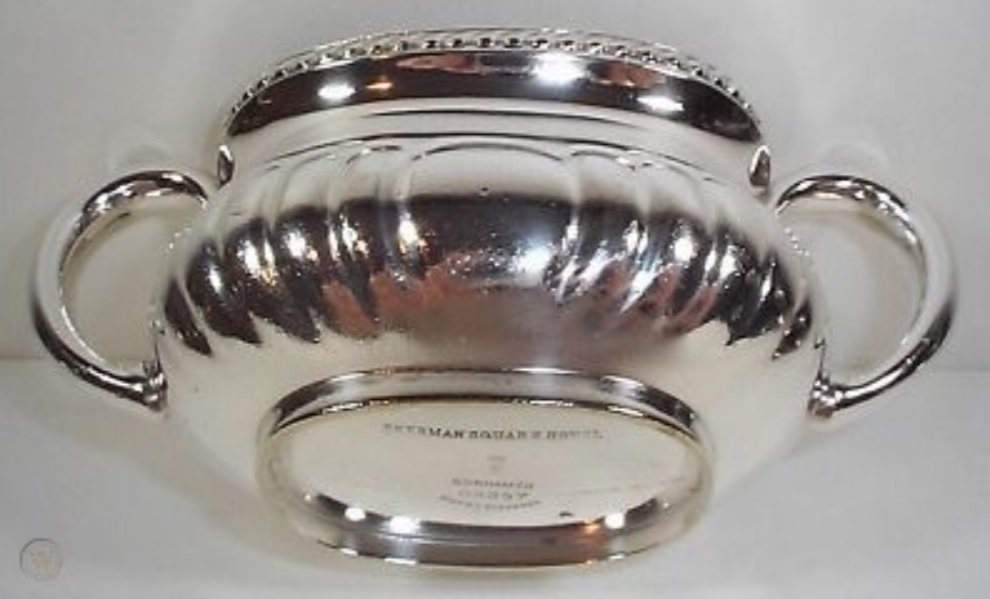 To set the scene, Civil War General William Tecumseh Sherman moved to New York City in 1886 after he retired from the military. He lived at 75 West 71st Street in a now demolished rowhouse.

Why did the UWS appeal to him?  Sherman was “looking for peace and quiet, which he said could be had only in the forest or in a great city,” according to Peter Salwen, author of “Upper West Side Story, A History and Guide”.

An avid theatergoer, Sherman also enjoyed the convenience of taking the downtown el to a show rather than be conveyed by carriage. After his death on February 14, 1891, the small, undeveloped area in the center of Broadway was named Sherman Square Park to honor him. (Although honored as a Union Army hero with multiple statues in NYC, the leadership role Sherman name played in the extermination and relocation of Native Americans following the Civil War is now regarded as a shameful part of our history.) 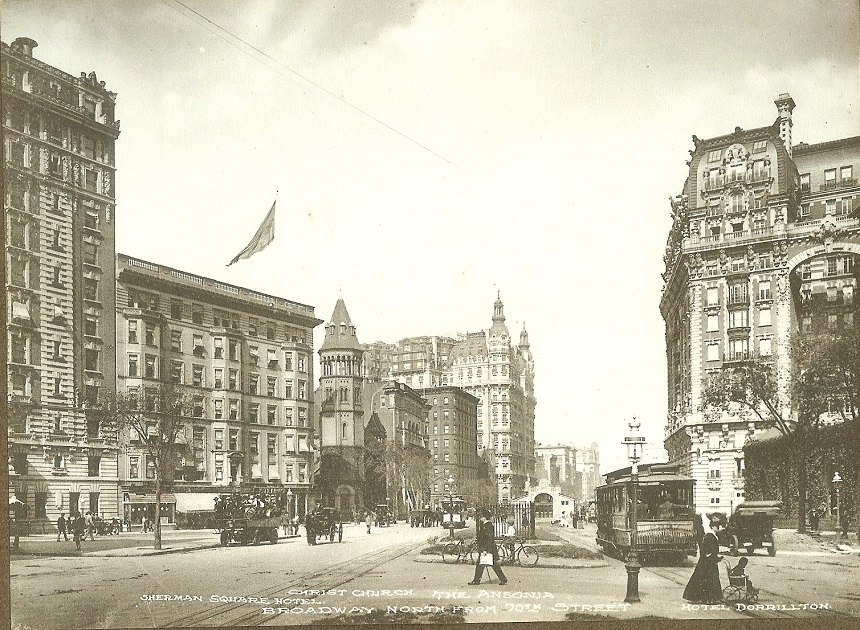 Two hotels stood side-by-side overlooking the park, The Sherman Square Hotel and Hotel Regent.  Only postcards of its elegant facade, a few print ads and a news report in the NY Tribune of a military gathering for showing of the colors as part of a huge May 29, 1906 Memorial Day Parade that continued on to the  Soldiers and Sailors Monument in Riverside Park remain to showcase the Hotel Regent.

Luckily, however, the details of every element of design, decoration and technology that went into making the Sherman Square Hotel a showpiece are documented in minute detail, along with lovely illustrations, in a 60-page book which must have been part of a promotional plan aimed at potential investors and hotel guests.

The documentation is fascinating and almost overwhelming.  The (anonymous) writer describes, for example: the mahogany wainscot used in the entry and the other valuable woods used for specific furniture and wall paneling; the type of silk in the draperies; the name of the outstanding purveyor of groceries (with Parisian connections) for the restaurant; kitchen equipment; billiard room trappings; fireproofing; and much more. 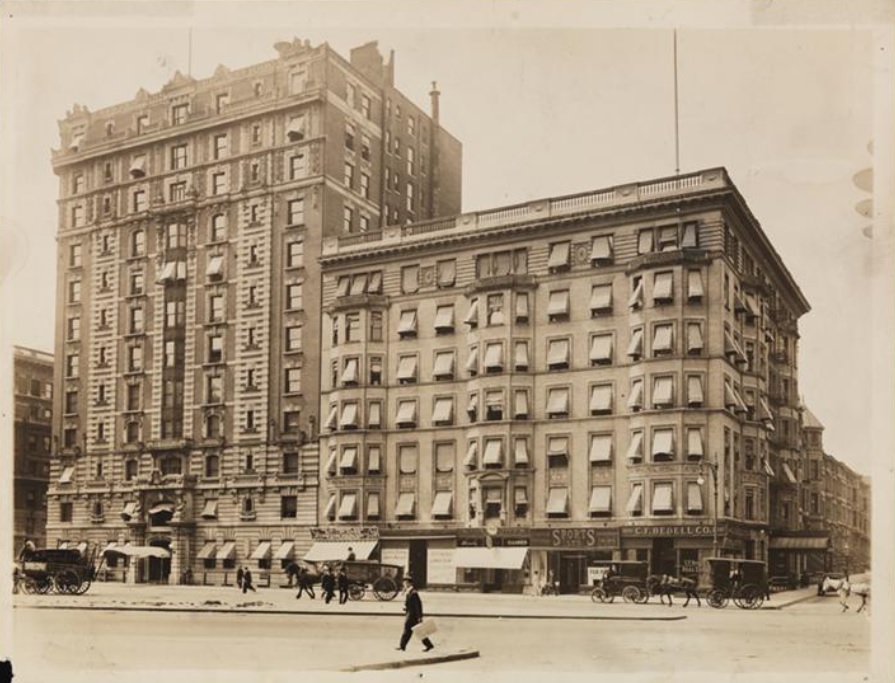 The Sherman Square Hotel (left) and Hotel Regent (right) circa 1920. Digital collection, Museum of the CIty of New York

Views and accessibility to both Central Park and Riverside Drive were offered as big pluses as was the convenience of the new subway with a station on 72nd street.  The hotel location was described almost poetically: “The situation of the hotel is agreeable and desirable.  In the spring and summer months, there is really no necessity for its guests to visit the seaside and country resorts for refreshing airs and charming views.  Central Park, certainly one of the most beautiful and interesting leisure grounds in the world, is but two blocks on the east, and the Hudson River, America’s classic stream, but two blocks on the west.  The hotel overlooks the River, and commands a magnificent panoramic view of it for three miles either way.”

In 1902 The Sherman Square bought The Regent for $900,000. The design for uniting the two buildings by architect Harry Mulliken was carried out in 1909 and the merged hotels became known as the Sherman Square Hotel.

Like other hotels of that era, The Sherman Square Hotel provided permanent, furnished apartments for families who could enjoy the restaurant and other hotel services, as well as offering suites for people who visited New York on business.

Ads for the hotel highlighted its restaurant.  Images of many of its menus are available through NYPL’s digital collection and show lovely, delicately drawn menu covers. The meal choices suggest well-prepared foods with some relatively fancy touches, especially for holidays. 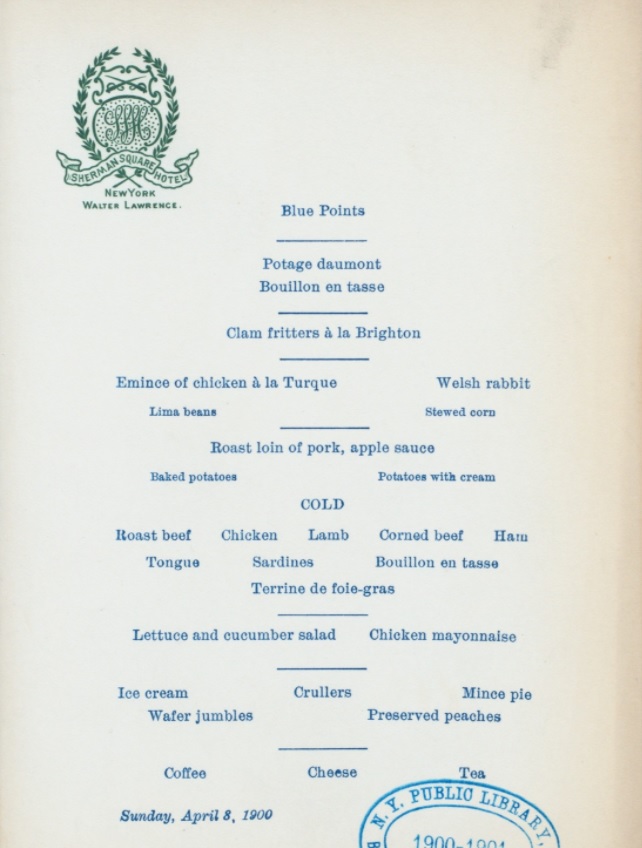 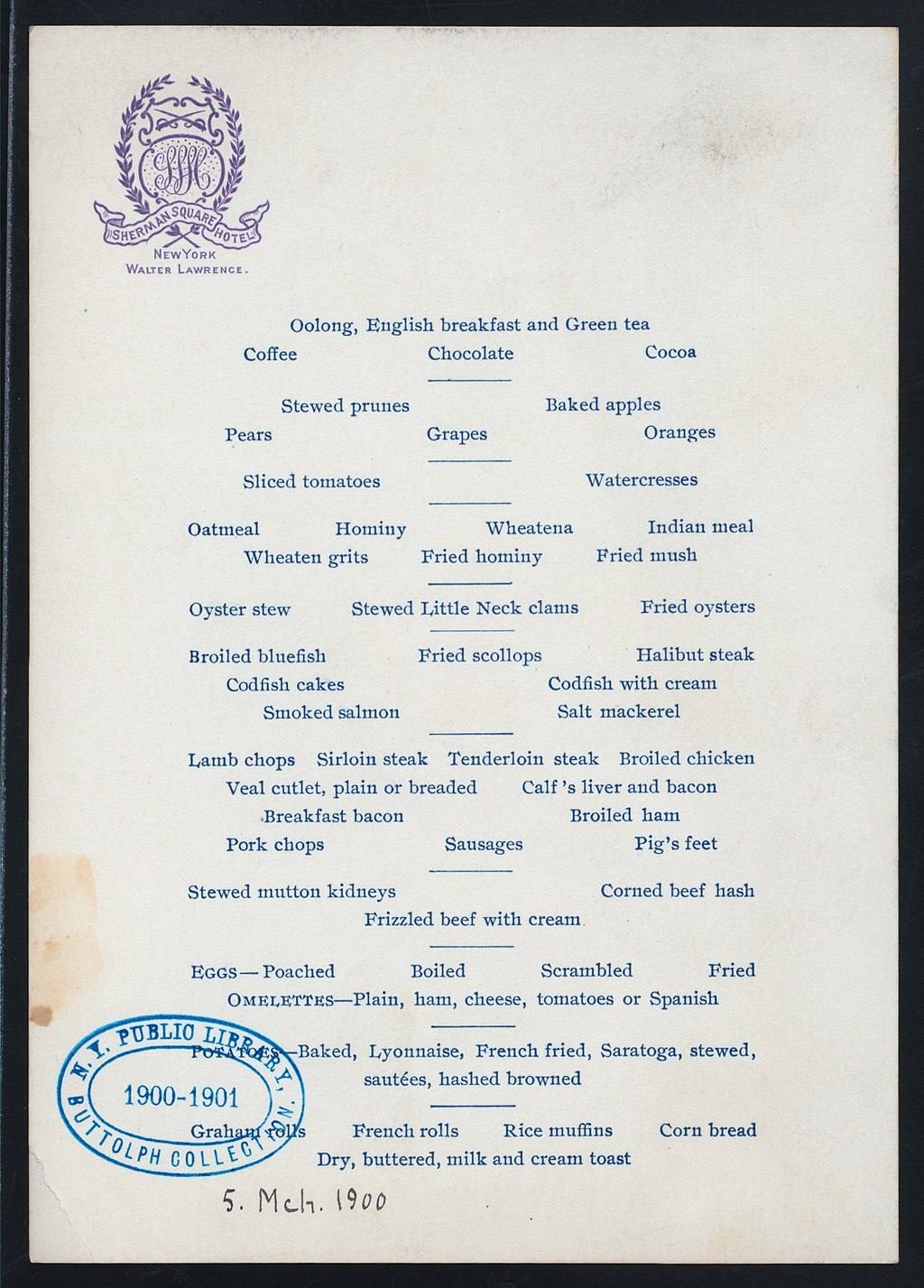 A photo of the dining room where meals like this might have been served in 1892 (restaurant under different management than in 1900) is included in the earlier mentioned hotel book.  As for the Gorham bowl, one source suggests, “The sugar bowl would have been used in the hotel’s Café, Grill, dining room, restaurant, or for room service…”

Although the sweetest days of the sugar bowl in The Sheraton Square were not destined to last, it remains a touchstone of an era when elegant hotels lined the Boulevard.