ABCs of Central Park, a Labor Day Tour for Kids 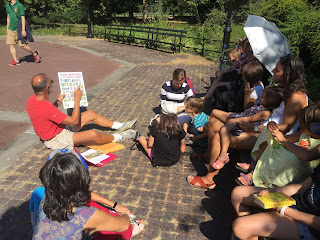 Labor Day morning in Central Park provided a special treat for about 25 Upper West Siders and their friends in the form of a tour by prolific author, sculptor, and Upper West Sider, G Augustine Lynas. The children ranged in age from 5 to 13 and were all enthusiastic participants in The ABCs of Central Park, the title of the book and tour. We met at 10am at the Obelisk, where “Lynas,” as he’s known to his friends (among whom LW counts itself), explained to the kids how he ended up finding and writing about the ABCs. Lynas was asked to create a Central Park chess set. He searched for a king of Central Park and decided on Frederick Law Olmstead, the original designer of the Park. The queen was trickier, but he found her in the form of the angel on Bethesda Fountain. So Lynas had his A for angel. B was, of course, for buildings and Bow Bridge, boats and baseball. C was for castle and carousel, and so it went, the letters and their representatives manifesting themselves along the way. At the next stop on our tour, Lynas showed the kids how he was able to discover, over the course of two years, all the letters of the alphabet as well as numbers 1 through 9 written in the branches of the trees. Finding the numbers and letters in the trees is considerably more challenging in the summer when the leaves obscure the branches, proving The ABCs of Central Park to be a great book for all seasons!

After stopping at the Marionette Theater, strolling through the Shakespeare Garden, and climbing in to Belvedere Castle, admiring views and details, hearing stories and history along the way, we came to the Great Lawn, the conclusion of our tour. Instead of concluding, Lynas took a variety of frisbees out of his backpack, and we all played until everyone had to move on to their Labor Day picnics.
Lynas did not focus on looming threats to the park (CENTRAL dARK) and the tour was very upbeat and in the moment. Everyone on the tour was re-infused with an appreciation for the beauty of Central Park and how very privileged we are to have such a resource at our disposal. It was a day the kids will not forget. When and if it comes time to protect Central Park, these kids will join the fight. 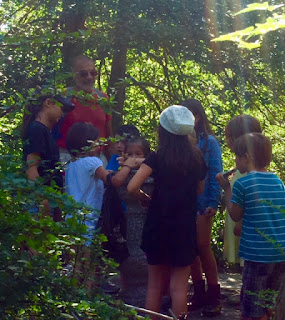 Rudie E. Hurwitz is the Youth Education Director at Landmark West! In addition to tours for kids like this one, she runs Keeping the Past for the Future, LW!’s architectural history and preservation in-classroom education program. KPF operates in public and private schools throughout the Upper West Side. Please direct any inquires to: rudiee@landmarkwest.org and look out for future blog posts about KPF’s activities.