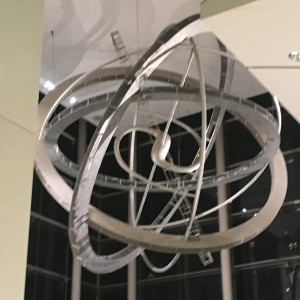 On Wednesday, April 6th, the Parks Department held their mandatory scoping session in the LeFrak theater at the American Museum of Natural History.  After brief introductions from the Parks Department, the Museum presented its project.  Senior Vice President for Operations and Capital Programs Ann Siegel explained the project’s needs and architect Weston Walker of Studio Gang Architects explained how the new Gilder Center will connect to ten buildings on five floors and in all produce thirty new connections.  The facility defined by its “sculpted walls” would be fully accessible throughout.

Following the architecture, Sue Golden, legal counsel for the project explained that they have necessary approvals from the 1860’s and 1870’s and they do not require further action for new buildings.  She outlined expected City-level reviews from the Parks Department, Department of Cultural Affairs, the Public Design Commission and the Empire State Development Corporation because there will be some State funding used.  She also acknowledged this will be reviewed by the Community Board and require approval from the Landmarks Preservation Commission, the Community Board and the State Office of Historic Preservation.

After a statement from AKRF Engineers who will prepare documents in conjunction with the environmental review process, the mic returned to Parks who reviewed procedures and opened the floor up to any public officials.  There being none wishing to speak, a delegation from Community Board 7, lead by Elizabeth Caputo outlined areas for consideration and highlighted the fact that CB7 has not yet taken a position.  Members of the public followed in an order relatively similar to how they signed up.

The local press from Manhattan Express to DNAInfo to West Side Rag and others have chimed in.  Read testimony from one of our partner organizations, the Municipal Art Society HERE and read LANDMARK WEST!’s statement in its entirety below:

Before the NYC Parks Department

The Statement of Significant Effect recognizes “that the proposed project may have a significant impact on the quality of the human environment”.

The appropriateness of the addition in question depends not just on visual qualities, but also its effect on the public’s experience of the Landmark (American Museum of Natural History) and its setting.  The presence of a park surrounding the Museum is a significant part of this experience–not merely a latent development site.

As the Upper West Side has grown into America’s second densest neighborhood, the Park has been treated–by the City and the community–as a multi-functional parcel of public parkland.  While the Museum relies on a nearly 140-year old statue that bears little relevance to the present character and density of the neighborhood, it has treated the park as residual–an element to tolerate rather than as an asset to celebrate.  The community has taken responsibility for maintenance of these grounds and been rewarded- the group New Yorkers for Parks has consistently identified Theodore Roosevelt Park as one of the five ‘best parks under 20 acres’ in the City.

Its time for the Museum to take a holistic approach to architecture and landscape design–an approach which acknowledges the extensive disturbance that the ramps, driveways and circulation defined in this proposal will wreak upon the park, and strive to minimize those impacts while aggressively seeking out opportunities to maximize the limited public access which currently exists.  Preparing a masterplan-(something institutions of this scale examine regularly) would address these concerns whereas relying on an 1874-77 plan that the museum deviated from by 1904 (within 30 years), does not.

The concern is that the Museum’s “commitment to exploring new areas in scientific research” will presumably yield an infinite range of new areas to explore.  Should the public expect that each discovery will result in a new building; the continued success of which will only further precipitate an expansion of programs, trigger an annual ticketed attendance increase “by approximately 500,000 people” and in turn, new over-crowded and inefficient facilities requiring even more, newer buildings further eroding historic building fabric and the park alike?

The Statement of Significant Effect acknowledges “changes related to neighborhood character due to the introduction of new travel patterns, a new structure, visual resource changes, and reconfigured parkland,” which strike to the very mission of LANDMARK WEST!.  The EIS should look at the potentiality that the park will be completely built–out one day through incremental growth, such as the encroachment represented by this project.  The Museum’s track record of executing a segmented development approach is short sighted; case-in-point is their proposal to obliterate the 15 year-old Ennead-designed Weston Pavilion in conjunction with this project in order to restore connectivity removed by the former’s own construction.

Gilder Center aside, now is the time when the Museum should be asked to consider off-site alternatives for future expansions as a means of mitigation.  In light of the Museum’s stance on Theodore Roosevelt Park and their construction purview, any next up-and-coming Richard Gilders would sound the death knell for the irreversible, and irretrievable, loss of parkland.  Any plan which does not establish limits for future expansion into Theodore Roosevelt Park is fundamentally inappropriate.

To put this in scientific terms, there is a symbiotic relationship between the landmark and the park, and neither should cannibalize the other under the pretense of the continued sustenance of the Upper West Side.