In 1927, architects Russell Boak and Hyman Paris left the firm of Emery Roth to start their own firm, Boak & Paris. Together, the duo designed multiple apartment houses on the West Side, East Side and in Greenwich Village.

Russell Boak was born on September 25, 1896 in the Bronx. He was the third of four sons born to William and Eugenie Boak, At least one of his older brothers also practiced architecture. Boak attended Stuyvesant High School, designed by the renowned C. B. J.  Snyder, for one year before dropping out at age 15 to work as a draftsman for Emery Roth. From 1912 to 1923 Boak worked his way up the ladder of the firm to become senior draftsman and designer, working closely with Roth, who personally took him under his wing. In 1923 Boak was named an associate in the firm, receiving a 25% interest. During the years he worked for Roth, Boak attended classes at the Cooper Union and New York Structural Institute, but Roth was his primary mentor and trainer until Boak and colleague Hyman Paris left in 1927 to form their own partnership.

Hyman Paris was born in 1890. “He was registered in 1922 as an architect through the University of the State of New York, although he is known to have practiced as an architect as early as 1913.”[1] Paris was the protégé of Gaetan Ajello, and likely worked for Ajello on at least some of the five apartment buildings he designed for Arlington C. Hall, a businessman who would become a major client for Boak & Paris in the 1930s following Ajello’s retirement. It is not known how long Paris worked with Ajello, but it is thought that he joined the firm of Emery Roth between 1919 and 1923 because his initials are found on drawings for the Temple B’nai Israel, a Roth building. 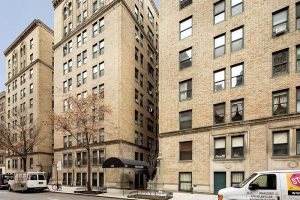 Boak and Paris were both working for Emery Roth during the architectural booms of the 1920s and 1930s, following the end of World War I. Both men’s initials appear on the drawings for several buildings designed during this time. Boak seemingly did particularly well during this period. He may have been the chief staff designer for the firm from 1923 to 1927, overseeing which staff were assigned to complete  certain drawings after Roth had provided the overall layout and architectural scheme of a new building. Boak’s initials are on the elevation drawings for five apartment buildings completed from 1923 to 1925 while Paris’ initials are found on some of the interior plans. These five buildings included the Whitby (325 West 45th Street, 1923-24), the Randolph (135 East 50th Street), and the Hotel Cardinal (243 West End Avenue and 71st Street, 1924-25).

Considering the success of Roth’s firm, many have wondered why Boak and Hyman chose to not only leave, but also take the risk of starting their own firm from scratch. In her book, “Baok & Paris Boak & Raad New York Architects,” Annice Alt suggests that the leave-taking may have been prompted by Boak’s relationship with Roth. It is possible that Boak believed that he deserved to become a partner in the firm, but had foreseen that Roth would only promote his sons, Julian and Richard, to partners (which did occur, but not until 1935). Another issue may have been Boak’s skill as a designer, which Roth may have perceived as a threat to his own power and position. Or perhaps the two men simply desired to go their own way and not have to work under the direction of another architect.

We also do not know how Boak resolved his twenty-five percent interest in Roth’s firm upon his departure, whether Roth  bought him out made Boak  renounce it. What is known is that the two new partners did manage to take some of Roth’s clients, including William Hanna, Bing & Bing, and Sam Minskoff.

Boak & Paris’ first building was Broad Park Lodge (1927-28), on the corner of Main Street and Westchester Avenue, in the New York City suburb of White Plains. As their first solo endeavor, this Tudor style apartment building was a showpiece, meant to impress future clients. Boak and Paris quickly established several architectural hallmarks, such as coordinated façade and lobby designs, and the concept of a bathroom for every bedroom. These elements were included as early as 1927 in their building at 225 West 106th Street. 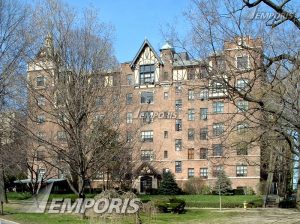 As a result of the Wall Street Crash of 1929 and the start of the Great Depression, the NYC building boom came to an abrupt halt. The only projects completed were those for which the financing had already been arranged prior to the Crash. This was the case for two Boak & Paris apartment buildings (two of a group of five; Emery Roth designed two, and Robert T. Lyons designed one) for Bing & Bing in Greenwich Village. The two apartment buildings were at 302 West 12th Street at Eighth Avenue (1929-31) and 45 Christopher Street (1930-31). 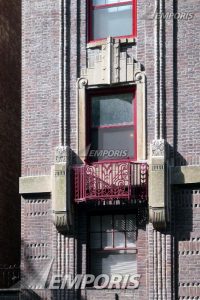 During the Great Depression, labor was cheap but materials were expensive. This meant that builders could afford to have their bricklayers take the time to lay brick in increasingly elaborate patterns, and create more detailed ornamentation on facades. Boak & Paris took advantage of this, using bricks of multiple colors and shapes to create eye-catching and memorable facades, particularly in the façade at 315 Riverside Drive (1930-31).

In the lead-up to World War II as more materials were diverted to armaments, architectural commissions fell off significantly. By 1940 the firm was forced to let go of draftsmen and move to a smaller office. They were contracted to do some interior alterations, such as at 73 Warren Street in June of 1942, but the 1880 building retained its original Romanesque Revival façade by John Hoffman.

According to Russell Boak’s AIA application, he worked as a solo architect from 1942 to 1944. It is not known exactly when or why Paris left the firm and what either architect worked on during the war. In 1944 Boak began a new firm, Boak & Raad, with Thomas O. Raad. It is unknown what Hyman Paris did following the war. Boak died in 1981 at the age of 85, and Paris died in 1966 at age 76. bro