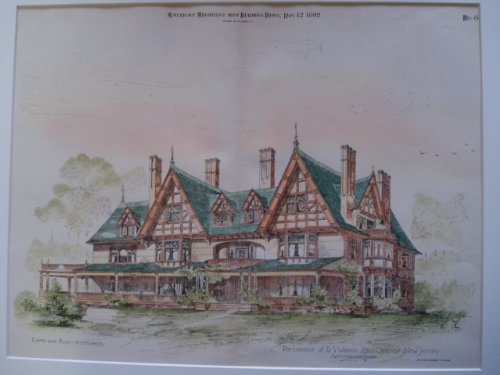 Hugh Lamb was born in Scotland in 1849. Very little is known about his childhood and early training, but he was established as an architect in New Jersey in 1872. By 1879 Lamb had established himself in New York City and had started a firm with Lorenzo B. Wheeler, called Lamb & Wheeler. The duo gained a reputation for designing rowhouses and “French flats” on the Upper East Side and in Greenwich Village.

Charles Alonzo Rich was born in Beverly, Massachusetts. He graduated from Dartmouth College in 1875 with a degree in engineering. He went on to train in architecture in the United States (1875-79) and in Europe (1879-82).

Lamb & Rich was established in 1882, and was active through 1899. Over the course of seventeen years the firm came to be counted among the most prominent in New York City. The firm was best known for its institutional and commercial

architecture, but it also designed many residential buildings. Rich and Lamb did not have trademark style, creating designs in neo-Gothic, Chateauesque, neo-Renaissance, Romanesque Revival and Queen Anne styles. Some of their most well known designs include: Millbank, Brinkerhof and Fiske Halls at Barnard College (1890-97); the Main Building at Pratt Institute (1885-87, New York City Landmark); the Berkeley School, later Mechanics’ and Tradesmen’s Institute (1890, designated as a New York City Landmark); and the Harlem Club and Harlem Free Library (1889, 1892, part of the Mt. Morris Park Historic District). They also designed buildings at Colgate, Dartmouth, Smith, Williams and Amherst Colleges.

Lamb & Rich was also active in the Upper West Side as early as 1885. Many of the designs produced for this area of the city were published in architectural periodicals. Some claim that the firm’s use of the Richardsonian Romanesque Revival style in the design of several row houses started an era of architects using a variety of different style for houses in the area. Examples of Lamb & Rich’s work in the Upper West Side include rowhouses in the Renaissance Revival, Chateauesque, Romanesque Revival, and Queen Anne styles, along with one school and an apartment building.

Following the ending of their association in 1899, both Lamb and Rich practiced independently. Rich practiced alone until he became the senior partner in the firm Rich, Mathesius & Koyl in 1903. RMK continued the work of Lamb & Rich, specializing in commercial and institutional buildings. In 1913 Rich was elected a Fellow of the American Institute of Architects and became a member of the Architectural League of New York. Rich retired from practice in the 1930s leaving a legacy of many buildings across the city.

This post referencd information from the following LPC designation reports: