Tower and CPW façade plan, as published in the Times, 11/1/2006
Word on the street is that a developer and architect have been selected. 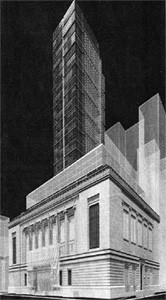 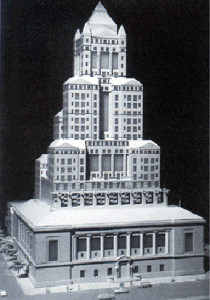 Not if.  When will the New-York Historical Society announce its selection of a developer and architect from its short list to build a 280-foot tower, forever changing the architectural profile of Central Park West?

Sign your name to the online petition urging the Society to be upfront with the community, make its process transparent, and hold a public forum on its plans to develop its site on Central Park West between 76th and 77th Streets. Send the petition to your friends and neighbors.

It’s déjà vu all over again…

As reported in the New York Times on November 1 andDecember 30, 2006 , the New-York Historical Society plans to redesign the façades of its Landmark building on Central Park West and West 77th Street; build a 280-foot glass tower on West 76th Street looming over the Landmark, with a base on the West 76th Street townhouse block; and add a large penthouse directly on top of the Landmark.

The Historical Society’s announcement arrives on the heels of other major alteration/construction projects proposed in historic neighborhoods all over Manhattan – in some cases, approved by the Landmarks Preservation Commission. If this Landmark can be defaced, all are at risk. If a tower can be built here, one can be built anywhere in our city.

For the latest news, please visit LW!’s “Watch-Blog” and email us to make sure you’re on our list to receive important updates.

Kevin M. Guthrie’s 1996 book, The New-York Historical Society: Lessons from One Nonprofit’s Long Struggle for Survival (funded by the Andrew W. Mellon Foundation), offers excellent background on the Society’s financial and administrative tribulations. A booklet based on the book, entitled History Matters: Lessons from the New-York Historical Society’s Board Room, is available at http://www.boardsource.org/dl.asp?document_id=15

**Save Our Skyline** is a coalition of citizens concerned about the future of the New-York Historical Society and its Landmark environment which includes the iconic Central Park West skyline.  We believe that preserving this special historic place in its present form is in the public interest, sustains important and tangible links with our past, strengthens our sense of cultural identity, adds to the enjoyment of present and future generations, and significantly enhances the quality of life in our neighborhood and our city.  Furthermore, we believe that our city’s low-rise Landmarks and Historic Districts must be preserved and not exploited as development opportunities.  Promoting New York history cannot be accomplished by destroying it. Click here for a list of supporters

Bill Moyers, journalist: “We would support the renovation of the existing building, but everyone should object to a tower that would be a stark intrusion. Would you put a 23-story tower next to the Louvre?” New York Times, 11/1/06

Judith Davidson Moyers, preservation activist: “[I]t seems inconsistent with the mission of the historical society to intrude on the historical nature of the neighborhood.” New York Times, 11/1/06

Allen Staley, Professor Emeritus of Art History at Columbia University: “…76th Street between Central Park West and Columbus Avenue is one of the most beautiful blocks in New York…and I believe that a large scale construction of the sort that seems to be envisioned can only be to its detriment,” in a 1/24/07 letter to the New-York Historical Society.

Mike Wallace, Pulitzer Prize-winning author of Gotham: A History of New York City to 1898: “I am troubled by the direction apparently being charted by the historical society,” discussing N-YHS’s shift in leadership and emphasis away from city history. New York Times, 7/19/04

Philip Johnson, architect: “If the Landmark Law has any meaning at all, it is to prevent the defacement (really means destruction) of building that have historic significance. Beyond this, the low profile of the [Landmark] is a very important caesura on the cliff-like heights of Central Park West….Civically and architecturally, the addition would be a disgrace for the community,” in a 1/18/84 letter regarding the 1984 tower proposal.

James Stuart Polshek, architect and former dean of the Columbia University Graduate School of Architecture, Planning and Preservation: “The architecture of the tower is not in question but its negative impact on the string of historical, cultural and architectural landmarks that grace the West Side of Central Park would be profound,” in a 1/23/84 telegram regarding the 1984 tower proposal.

Robert A.M. Stern, architect, dean of the Yale School of Architecture, former director of the Columbia University Historic Preservation Program and author of New York 2000, etc.: “The Historical Society is one of a series of public buildings erected at the turn of the century on Central Park West which in concert form a chain of monumental gateways to the West Side…These buildings remain as a testament to the low-scale Classical urbanism of the City Beautiful movement. Threatened though they are with redevelopment, they remain individually too precious to the city’s urbanism and sense of its own historical evolution to allow drastic development of the kind under consideration,” in a 1/13/84 letter regarding the 1984 tower proposal.

Carter Wiseman, author and former architecture critic for New York magazine: “[T]he public has determined—through its representatives on the Landmarks Preservation Commission—that retaining these buildings in their present form is in its interest: that they connect us with our past, that they please the discriminating eye, that they add to our sense of cultural worth, and that they make an enduring contribution to the survival of a hospitable New York. If their form is to be changed so that their owners may prosper, it is fair to ask whether the gains outweigh the cost to other New Yorkers in such tangible coin,” discussing plans to alter both N-YHS and St. Batholomew’s Church. New York, 1/23/84

Paul Goldberger, former architecture critic for The New York Times: “[T]he landmark building of the New-York Historical Society, too, brings a kind of benefit to those who never pass through its doors. What, after all, should be more a symbol of permanence than a building dedicated to honoring the history of the city?…[I]t is not hard to feel that some of these institutions are eager to have it both ways—to enjoy the privileges and benefits of tax exemption, but also to have the right to play in the free market of real estate.” New York Times, 1/22/84

Goldberger: “When the city’s Landmarks Preservation Commission voted Tuesday to reject plans for towers at St. Bartholomew’s Episcopal Church and the New-York Historical Society, it was issuing a decisive verdict against the growing trend toward turning landmark buildings into profit-making real estate.” New York Times, 6/14/84

Michael Kimmelman, art critic for the New York Times: “Years of mismanagement have clearly put the society in a hold. It is sad that New York, unlike countless other places around the country, can’t support its own historical society. The institution has a great library and an important collection. But the cure for its ailment may be worse than the disease….This time, the stakes, involving some of the city’s prized Old Masters, are too high. The society says it will serve the public better if they are auctioned off. But if this is the price the public must pay, the society isn’t worth saving.” New York Times, 1/8/95

Andrew Dolkart, James Marston Fitch Chair and Associate Professor of Historic Preservation, at Columbia University: “…the unique character of this section of Central Park West would be severely compromised by the proposed Historical Society tower, which would alter the rhythmic quality of Central Park West as we know it,” in his report for the Central Park West Preservation Committee regarding the 1984 tower proposal. Click here for his 1/26/84 letter.

George Lewis, former Executive Director of the American Institute of Architects (AIA): “To certify this proposal as appropriate would open the doors for developers to begin imagining the possibilities in major alterations of landmarks all over town.”