dnainfo.com has a great article covering Community Board 7’s full board meeting from Tuesday.  At this meeting, the full board declined to follow the Land Use Committee’s vote to approve Board of Standards and Appeals “BSA” variances which would have allowed the developer concessions to shirk certain building code requirements.

While LANDMARK WEST! is completely behind the protection and preservation of this individual landmark, and fully supports its re-use, the design goes too far asking too much of the building, without respecting the existing architectural character.  Appropriate alternate re-uses exist that would not require the severe alterations as proposed while undermining of the codes set in place to protect all of us.

Please read Emily Frost’s reporting on the topic here and scroll down for LW! testimony from the hearing: 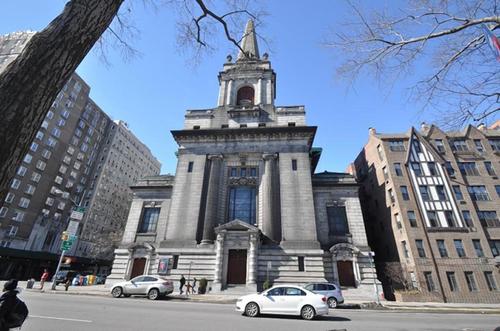 Certificate of Appropriateness Committee
Before the Full Board of Community Board 7
361 Central Park West
May 5, 2015
LANDMARK WEST! is a not-for-profit community organization committed to the preservation of the architectural heritage of the Upper West Side.
We wish to comment on the application to the Board of Standards and Appeals for the conversion of the former First Church of Christ, Scientist (Carrère & Hastings, 1899-1903, an Individual Landmark designated in 1974) into a 39-unit residential building, requiring six waivers under the New York City Zoning Resolution and Multiple Dwelling Law.
I think we all recognize that 361 Central Park West, the former First Church of Christ, Scientist, is one of the crown jewels of the Upper West Side.  It was designed by the same architects, Carrere & Hastings, who gave us the New York Public Library at 42nd Streetand the Frick Museum across the park on East 70th Street.  It was among the first Upper West Side buildings to become an Individual Landmark (in 1974).  In that sense, it’s like our New York Public Library.  This is about neighborhood identity and preserving the integrity of this landmark in a way we can be proud of.
LW! has opposed this proposed adaptive reuse because of the dramatic impact it will have on the fabric of this building. Century-old stained-glass windows will be removed and reconfigured—essentially destroyed—because some hypothetical condo buyer might not like them.  The secondary facades of the building will be carved up to create windows.  And, when the dust settles, we’ll have not only a desecrated landmark, but a substandard living environment by any definition.  This concept has been flawed from Day One.

The purpose of the waiver and variance process is to provide relief to property owners who really need it. It is not a tool to enable speculative developers to “max out” the economic potential of a site.  “Reasonable use” is the benchmark.  Once we loosen the standard on what constitutes “reasonable” development in our neighborhood, we never get it back.

Why should you, in your roles as guardians of our community, why should you feel compelled to relax the rules that everyone else lives by—rules that we all agree are important for quality of life—for a development like this?  Our city has enough cases where public assets are given away for little return—just look at the midtown skyline.  Let’s not add this site to the list.

And please don’t allow yourselves to be misled by warnings that the landmark will sit empty and derelict.  Where there’s a will, there’s a way.  Just look at Mount Pleasant Baptist Churchon West 81st Street—also a church, also a landmark, also a residential conversion, but on a much more challenging midblock site.  They found a way to recycle the building that involved minimal changes to the landmark and no waivers or variances.
And look around you at all of the sensitive, profitable uses of landmark buildings—the Upper West Sidehas over 3,000 of them.   The presence of a Landmark does not, in and of itself, constitute a “unique physical condition” under the required finding (a) of Zoning Resolution Section 72-21.  Yet, that’s the crux of this developer’s argument.
This application also does not meet the required finding (d) of Zoning Resolution Section 72-21 – that the hardship not be self-created.  The problem, if there is one, is the developer’s desire to shoehorn 39 apartments into the building.
These variances fail to meet the findings and should be denied.