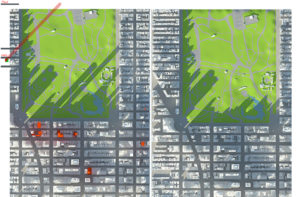 Leading this assault on our public assets is a developer in partnership including Extell, aided by the kind of laissez-faire pro-real estate policies that sanction the supertall towers transforming NYC’s midtown skyline.

Yet, developer plans filed with the Department of Buildings show only a 25-story building.  Does this seem shady to you?

…the skyline of New York is a physical reminder of

how wealth and power get their way without regard

for the impact on the lives and neighborhoods of everyday people.

LANDMARK WEST! is part of a growing citywide movement* calling on the Mayor, City Council Members, and other decision makers to:

* We’re all in it together.  LW! works with colleague groups throughout the city to amplify our voice.  Several points above are adapted from a May 2015 report by the Central Park Sunshine Task Force of Community Board 5, with the inspiration form the “Accidental Skyline” by the Municipal Art Society of New York and New Yorkers for a Human Scale City.