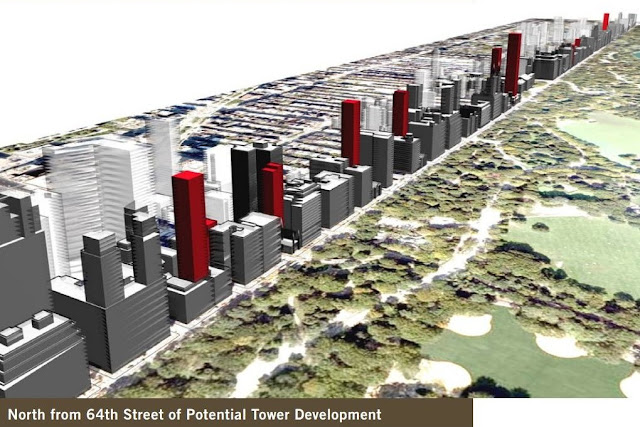 Are there new towers in the future of this skyline?  This is the important and pressing question LW’s study by WXY architect Claire Weisz seeks to answer.
..
The urgent need to study Central Park West emerged out of a series of proposals to alter the avenue’s iconic skyline—the primary “face” the West Side presents to the rest of the city—and change the character of the parkside rowhouse midblocks.  These proposals included development schemes put forward by Congregation Shearith Israel and the New-York Historical Society (both Individual Landmarks also included in the Upper West Side/Central Park West Historic District).
..

Architect and historian Robert A.M. Stern called buildings like these “…a chain of monumental gateways to the West Side…a testament to the low-scale Classical urbanism of the City Beautiful movement.” (letter dated January 13, 1984)

Community Board 7, former City Planning Commission General Counsel Norman Marcus, and zoning consultant Gerald George were indispensable advisors, together with the scores of individual donors who recognized the relevance of anticipating—and potentially shaping—development before it hits the pages of the New York Times.

Back in 2007 when this study began, LW! challenged the idea that our neighborhood was immune to overdevelopment merely as a result of extensive landmark designation and contextual zoning.  Clearly, through special permit and variance processes, developers could find ways to “unlock” the development potential of the Upper West Side.

As midtown “mega-towers” begin their creep up the West Side and Mayor de Blasio pushes plans to raise height limits, the potential for inappropriate development along Central Park West is greater than ever.