It’s time to end pay-to-play real estate deals.
—
From the steps of City Hall, a coalition of community groups from across New York City demanded an end to the “pay to play” relationships between real estate developers, lobbyists and City and State government.  Together, we called on U.S. Attorney Preet Bharara to focus his investigations on the quid pro quo political system that repeatedly thwarts community efforts to oppose developers whose money has already guaranteed they have the ear (and favor) of the City and the State.
— 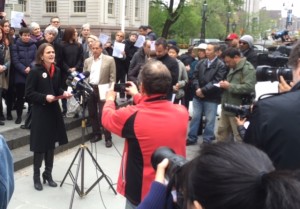 Citing Congregation Shearith Israel, the former First Church of Christ, Scientist, and 711 West End Avenue as cases in point, LANDMARK WEST! President Kate Wood said, “What’s the point of so-called ‘public process’ if the public doesn’t matter?  We keep showing up – and speaking up – because we refuse to abandon our city, even though it often feels as though our city has abandoned us….What New York needs now is the political will to end the ‘business as usual’ that destroys our neighborhoods.”