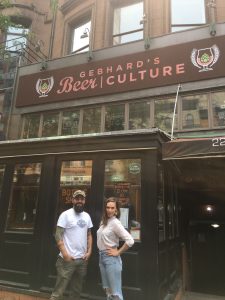 The latest and likely coolest late July arrival on West 72nd Street was the drop off of a shipping container in front of Gebhard’s Beer Culture at #228. Matt Gebhard and Manager Lindsay Ronchi were thrilled with the innovation spurred by the pandemic-related need for more distancing space. The container was transformed in short order for outdoor dining. With sliding barn doors opening toward the sidewalk, beer drinkers are able to chat with others who are seated across the way in the already long-installed windowed storefront extension. The concept meshes well with a celebration of resilience and strengthened importance of neighborliness with emergence from very difficult months of restrictions and confinement. Matt says he and others on his team are very grateful to have survived thanks to a federal grant.

Gebhard’s Beer Culture was established on the UWS five years ago modeled on a hybrid concept (taproom/bottle shop/restaurant) Matt established at the taproom he opened in midtown a few years earlier. The whole mood in the large, deep, dimly lit interior space conveys the comfort, and camaraderie evoked by the word taproom. Here actually not only are a huge number of beers offered on tap, but also bottled beers, a growing selection of wines and a full liquor bar. Tables up front are fashioned out of kegs. It’s all very mellow and inviting.

The dedication to beer, what’s good, truly excellent and also newly discovered, is a passion here.  It is also well informed. Matt, who is originally from Upstate New York, now lives with his wife and dog in Long Island City. He knows the beer industry inside-out. Starting out as a beer rep, he opened his first taproom after ten years becoming familiar with every aspect of the beer business.

Lindsay had been a ballerina performing with the Pennsylvania and Boston Ballet companies. When she moved to the UWS, the plan was to dance in NYC. When she found that wasn’t happening, the bartending she had been doing to make ends meet became her full time job, one she came to truly enjoy. She met Matt at a beer fest in Cooperstown and became part of the beer culture business on the UWS soon after.

What to order among the many beers listed on a chalkboard?  Asking Matt or Lindsay is a safe bet unless you already have a personal favorite. The beer list changes every day. “Every time we kick a keg, we add a new type of beer to the list.” The chalkboard also charts the specifics of the content and origin relating to each beer.

Asked about his personal favorites among craft beers, Matt says, “We tend toward the American ones since there are so many good ones.” They also dip into Belgian and other European labels. “We really like working with a maker called Industrial Arts Brewing Company, out of Rockland County. These beers are named with industrial tool terms like “Wrench” and “Torque Wrench.” Matt describes this New England style IPA as “a very hot type of beer, hazy but not bitter.” And, to go along with the beer, Gebhard’s serves “elevated bar grub” like fried cheese curds with pineapple pepper jam.