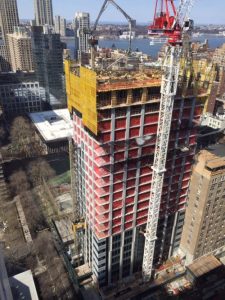 In a happy occurrence, the Courts have chosen to uphold the law and directed the New York City Board of Standards and Appeals to essentially “fix it”.  Previously, the BSA has upheld the prepared findings it stated at the onset of their initial hearing on 200 Amsterdam Avenue which sided with the legality of the permits issued by the Department of Buildings (DOB) even though the DOB itself admitted, on the record, multiple times, that it should not have issued the permits.  The Municipal Art Society and the Committee for Environmentally Sound Development filed an injunction previously which means that any construction beyond the foundations is happening at the developer’s own risk and may need to be removed if deemed the permits and lot assembly are inappropriate for this scale of development (a fact that the DOB has already admitted, on the record).  Read coverage of this unique scenario from PATCH, and GOTHAMIST and West Side Rag.