Courts side with Developer 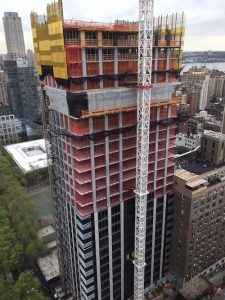 Although courts believe that the zoning lot for 200 Amsterdam Avenue has been erroneously assembled, they courts stopped short of revoking the permits but directed the City agencies–the DOB (which is twice on record saying they never should have issued the permits) and the BSA (whose [recused] chair, worked on creating this 39-sided zoning lot) to “figure it out”.  The community, voiced by the Municipal Art Society and the Committee for Environmentally Sound Development requested that the courts issue a Temporary Restraining Order after a week with two partial stop work orders due to falling construction material from the site.  Their argument is that the developer, although they have signed a waiver agreeing to not claim hardship for what has been built beyond their foundations will be “vested” if they complete the structure prior to the City (the DOB and BSA) acting.  The Courts refused to pursue this, leading the fox to once again guard the hen house.  Despite being right, the community is again in limbo as the city agencies trusted with our best interest wind down the clock.  Read more in the West Side Rag.