By Tom Miller, aka the Daytonian in Manhattan 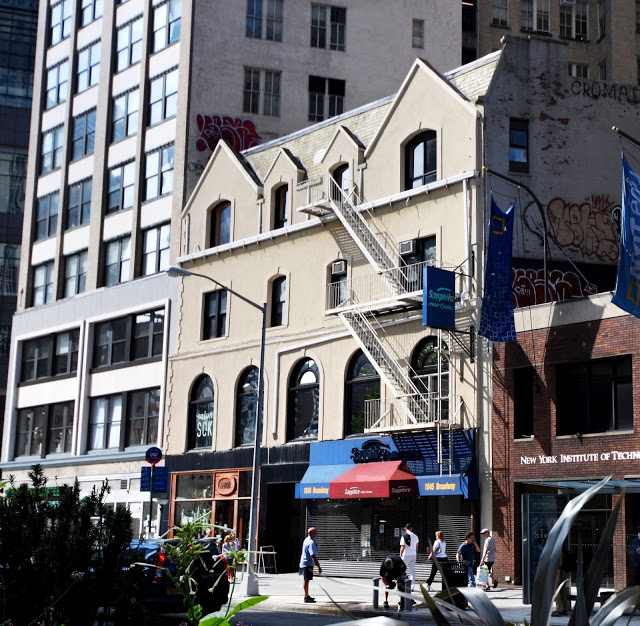 On September 1, 1883 The Real Estate Record and Builders’ Guide reported on two planned four story rowhouses at Nos. 26 and 28 Fifth Avenue.  The upscale homes would be constructed by Dr. J. H. Gautier following the designs of architect Henry J. Hardenbergh. 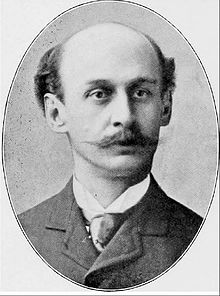 The townhouses were not the first, and certainly not the last, time the two men worked together.  Five months earlier, construction had begun on an intimate apartment building on The Boulevard, the extension of Broadway north of 59th Street. 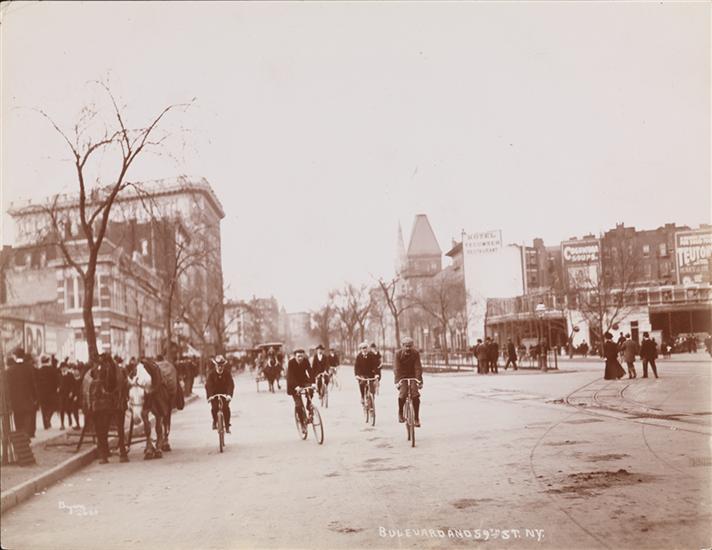 The four-story brick structure, at Nos. 17 and 19, sat just steps away from the entrance to Central Park. Hardenberg produced a charming Queen Anne building that pretended to be mirror-image private homes.  Sharp gables provided a serrated roofline before a slate-shingled mansard.  Arched openings and balconies contributed to the pleasing design.

Among the first tenants was wealthy broker James M. Selover.   His brother, Major Selover, was described by The Sun as “at one time a power in Wall street, and still one of its interesting characters.”  On March 24, 1887 the Major became suddenly ill in the office of DeMott & Durant.  The Sun reported that “The Major was taken to the home of his brother.”

Also living in the apartment house at the time was P. S. Mayer, who sold butcher fixtures.

Two years later James M. Selover was in Chicago on business.  He died there at the Leland Hotel on October 18, 1889.

When the Gaultier estate sold the building to the Upright Realty Co. in March 1906, The Boulevard had been renamed and the address was now Nos. 1845 and 1847 Broadway.  At the time of the sale it was still being operated as an apartment house.  Among the tenants was Margaret Windt, a dealer in soda fixtures, and real estate operator Charles F. Deshler.

But by 1909 the Upright Realty Co. had remodeled the building for commercial purposes.  In December that year it leased the property “to a client for occupancy,” according to the Record & Guide, for 21 years at a total rent of $500,000.

By now the stretch of Broadway from Times Square to approximately 72nd Street was known as “Automobile Row.”  Former carriage builders were now concentrating on the manufacture and sale of motor vehicles; and they aggregated along Broadway. 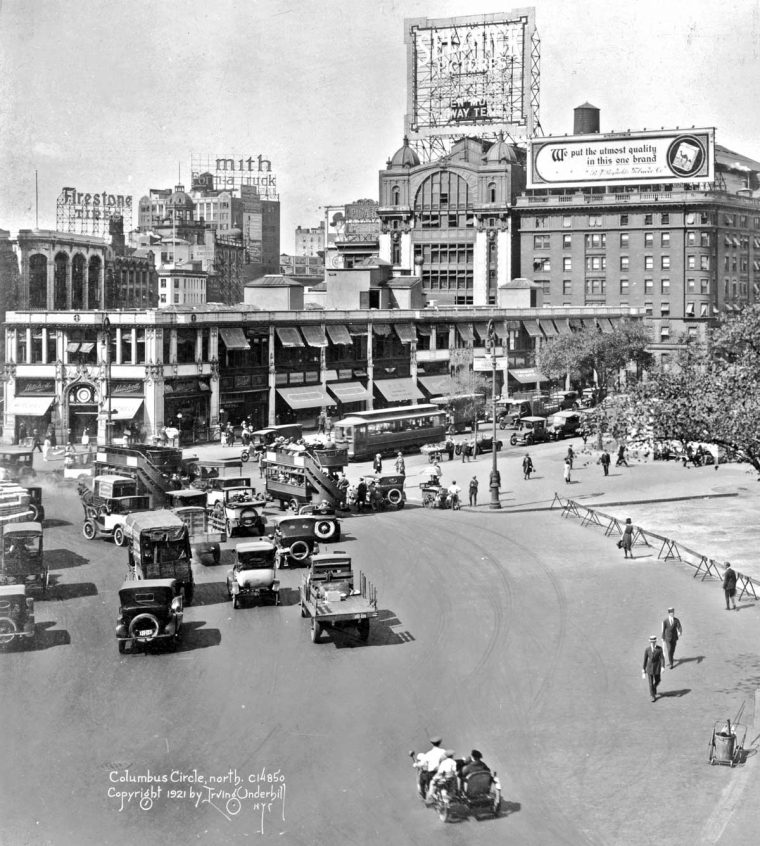 Nos. 1845-1847 Broadway became home to the Colt-Stratton Company, the east coast distributor of Dodge motorcars; and to the New York Automobile Dealers’ Association.  Part of the ground floor was leased to Louis Martin, the restaurateur best known for his Café de l’Opera on Broadway at 41st Street, and his partners the Bustanoby brothers (who operated the Café des Beaux Arts on West 40thStreet), and George W. Rector. 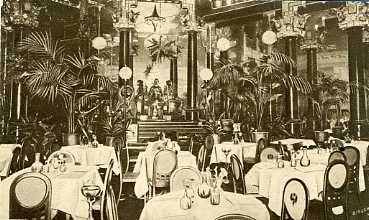 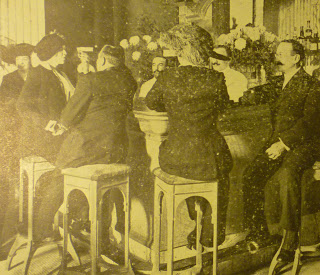 In March 1920 Russell L. Engs, the owner of Cole motor cars, purchased the building for $400,000.  Six months later, the restaurant gave up sharing space with an auto showroom.  Although the New-York Tribune noted the building “is famous as a restaurant,” the cafe moved into the space next door at No. 1849 in November that year. 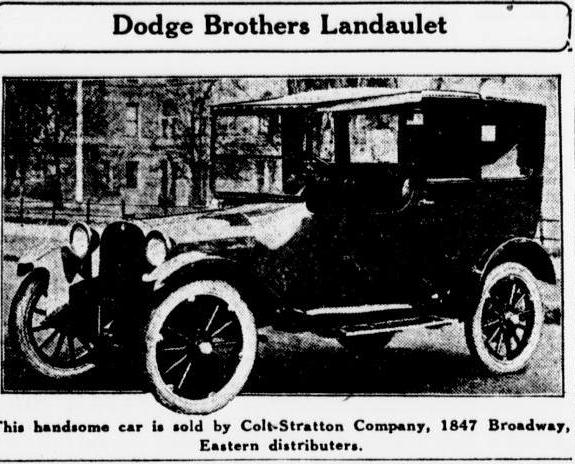 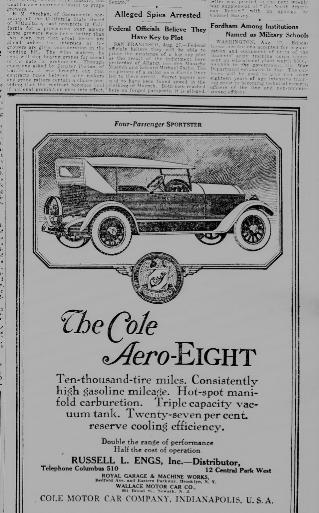 The Automobile Dealers’ Association had established its annual Orphan’s Automobile Day in 1904.  The 1919 event treated approximately 5,000 children to a day at The Bronx Exposition and Amusement Park.  The New-York Tribune noted “Each year some man prominent in the automobile industry acts as ‘daddy’ of the day for youngster and pays for the feeding of them.  This year, W. C. Durant, of the General Motors Corporation, will have that honor.” 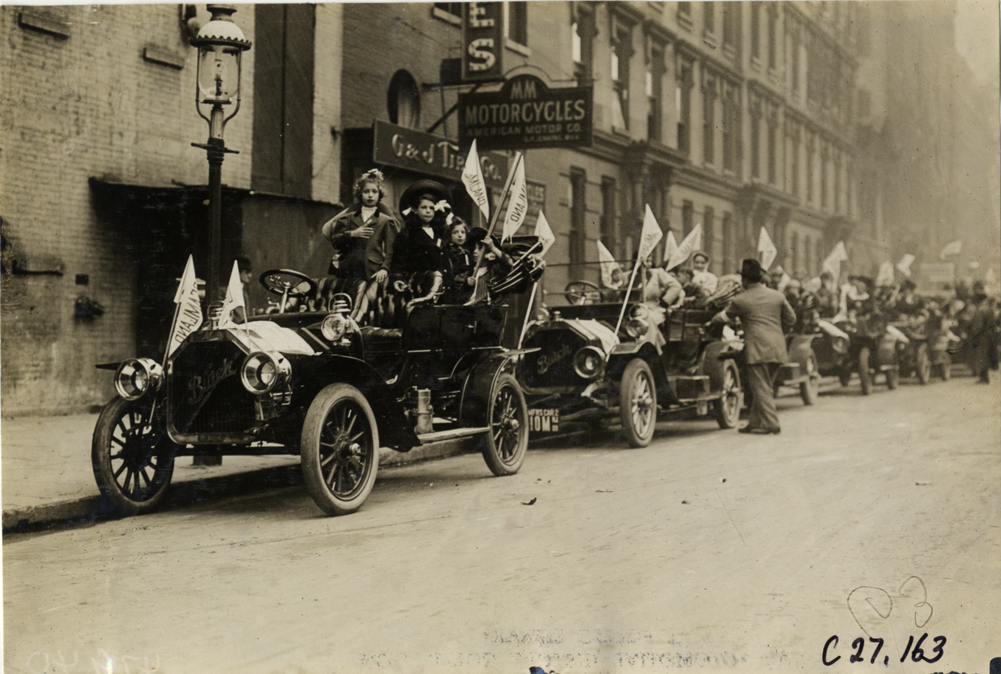 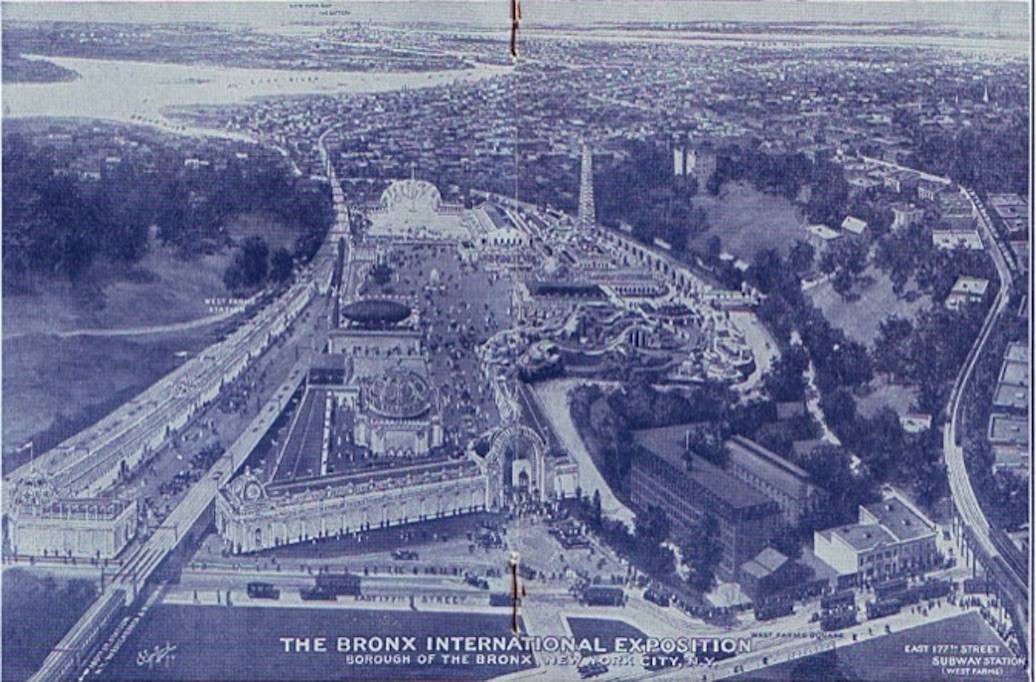 The newspaper played on the guilt of vehicle owners when it reported “Although there have been many donations of cars and trucks, there is still a great shortage, but it is believed that owners of cars and trucks will rally to the call to provide transportation.”  It added “Otherwise many of them will have to stay at home.” 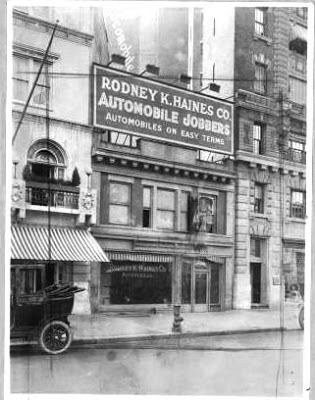 In the 1920s the building, seen partially at left, retained its balconies and French doors.  Another automobile concern operates next door.  from the collection of the New York Public Library.

On October 9, 1920 members of the Automobile Dealers’ Association met for a luncheon here.  The industry was plagued with price reductions and there were fears that factories would grind to a halt.  Ned Jordan gave the members a pep talk of sorts.

“If you have faith in this country, how can there be any stoppage of production at this time?  It is impossible for a business of such great proportions to b affected by a temporary lull.”  Jordan pointed out that in 1910 there were 181,000 passenger cars in the country.  In the first six months of 1920 there were more than a million, and he predicted that number would double by January 1.

The relatively small building may have proved inadequate as an automobile showroom as the industry grew.  In 1925 architects Chas. N. Jhinston & Bros. were commissioned to renovate it to, rather ironically, a restaurant and stores on the lower level and offices above.

In 1941 the United States Army and Navy Union were upstairs while the ground floor was operated as a funeral home by Feeney Sons Chapels.   The following year the School of Creative Movement moved in.  The dance school created the Garrison Auditorium here where dance recitals were held.  In February 1942 the school presented a “studio demonstration of recreational work, percussion exercise, advanced body mechanics, elementary and advanced composition.”  The school would remain in the building for at least a decade.

As the middle of the century arrived, space was taken by a variety of tenants like the Employees Union Local 115 of the C.I.O. which took a full floor in October 1953, and Alien Communications, Inc., distributors of audio systems.

While half of the ground floor continued to house a restaurant, the other was home to Francis Fischer’s jewelry store.  In April 1950 a man walked in and looked over the selection of watches.  Seemingly tepidly interested, he promised Fischer that he would come back later to decide on his purchase.

A week later the same man returned at around 9:30 in the morning.  But his approach had changed.  He pulled a pistol from his pocket and ordered Fischer to open the safe.   The terrified jeweler said “There’s no money there—it’s in my pocket,” and handed over $75.

The thief insisted that he open the safe.   But Fischer was either too nervous or was reluctant to open it.  He insisted “I can’t open it.”  The frustrated robber struck him over the head with his gun and snatched a watch from the counter.  He ordered Fischer on the floor and ran out, escaping in a waiting car.  The jeweler was treated for cuts and bruises at Roosevelt Hospital.

By 1965 Fischer’s jewelry store was run by Felix Klein as Coliseum Jewelers Company.  Among the tenants upstairs was Camera Mart, Inc., specialists in movie, television and photography equipment.  On July 9 that year the 54-year old Klein suffered a similar episode to that of Francis Fischer 15 years earlier.

As Klein opened his shop at 8:30 that morning, two men pounced, striking him over the head with an ash tray stand.  The men escaped with $2,000 worth of jewelry.  Like Fischer, he was treated at Roosevelt Hospital for head wounds.

Two months later, when plans to construct the 45-story office building across Broadway on Columbus Circle were disclosed, Felix Klein was eager to announce his support.  He told a reporter “Soon more people will be working here.  This will be a busier street and there will be less chance of crime.  Can you imagine what it will mean to have thousands of people working across the street?”

The dance studio in the upper floors became an Arthur Murray’s Dance Studio in the 1970s.  Posters in the mirror-lined room here promised students in 1971 “We Teach You to Be Somebody.”

In the meantime the restaurant space at street level had become home to Martin’s Bar and Restaurant.  It was the scene of a shocking murder on December 29, 1980.  Although 63-year old house painter Charles Passiglia lived in Glendale, Queens, he was a regular at Martin’s.  There were approximately 20 other patrons there that night as he sat on a stool at the bar at around 9:10.

A man entered with a shotgun concealed in a plastic bag.  He walked up to Passiglia and fired one shot into his head.  As Passiglia slumped, then fell to the floor, the other patrons ducked for cover.  According to police “The whole thing took about four seconds.”

Two customers ran out onto Broadway after the gunman and saw him jump into a waiting Cadillac which drove south on Ninth Avenue.  Police told reporters “Nobody could understand it.  They all said he was a nice, quiet, guy.”

The dance studio went through a series of incarnations including the Darvash Ballet Studio, the Stepping Out Studio that offered classes in “Ballroom Olympics,” and Paul Pellicoro’s Dancesport, offering ballroom and Latin classes. 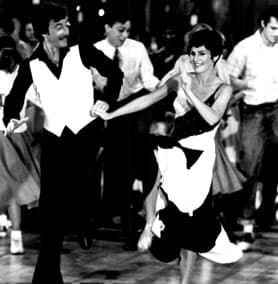 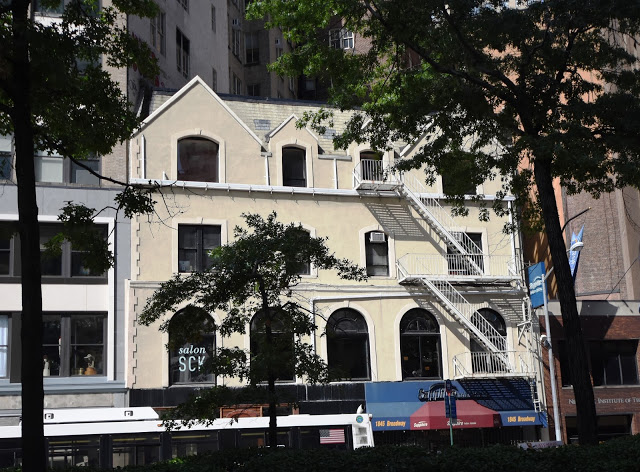 In 1999 the restaurant space became Sapphire, an Indian restaurant still operating in 2015 (closed 2019).   Although Hardenberg’s quaint brick apartment building is heavily altered, its survival on this stretch of Broadway, lined with towering office buildings, is just short of miraculous.