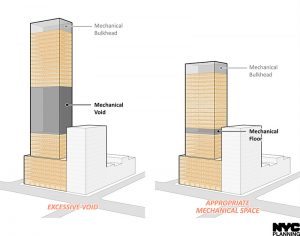 On Wednesday, March 13th the Department of City Planning held a long-awaited hearing on their Zoning Text Amendment to bring some predictability to the increasingly-abused mechanical void loophole exploited by developers to reach ever higher vantages.  Initially promised by the end of 2018, this March 2019 hearing was the first step towards addressing one of many factors developers use.  A concern of the public was that this zoning text amendment would not be strong enough, and instead codify a different set of unsavory circumstances, essentially safeguarding the production of buildings “perforated” by 25-foot clear mechanicals every 75-feet of rising floor area.  This issue was addressed heavily in the press from AM New York to CRAINS New York Business, and has the support of city elected Manhattan Borough President Gale Brewer, City Council members Helen Rosenthal, Ben Kallos and State Assembly Members Linda Rosenthal and Dick Gottfried.

The LANDMARK WEST! Certificate of Appropriateness Committee is grateful that the Department of City Planning has heeded the community outcry and chosen to examine the problem of excessive voids used to raise residential tower heights in predominantly residential areas.  Our Committee sees the draft text amendment to be a good faith effort in beginning to address one of a long list of zoning loopholes that developers manipulate, often at great physical and fiscal cost to the surrounding community that these developments seek to dominate for their private gain.

Unfortunately, even in this case, after a year of study, the text will only address this abuse in certain R9 and R10 districts.  For systemic change, the Department of City Planning should recognize this as a first step in a long marathon back toward sensible planning.

Since 1961, mechanical spaces have been exempt from a building’s floor area in the Zoning Resolution, it was just a matter of time before the fiscal return from constructing these spaces exceeded the cost of building them.  That time began in 2012.  In 2019, the City is still playing a game of catch-up, and as things currently stand, the community is losing—badly.  The necessary approval of this imperfect zoning text gets the public on the board before we lose anymore ground—or in this case, sky.

Concerns of the Committee, with the proposed text include the mathematics applied.

At the proposed 75’-interval, given that current luxury floors trend to 16’-5” each, a 25-foot high mechanical space would appear every five floors, which is unnecessary.  Even with this reality, using 200’ intervals would mean it is approximately one mechanical floor for every 12 floors of rise, a solution that begins to address the excessive bulk, which is part of the public’s concern.

The CPC’s examination of 796 buildings over a ten year window turned up a mere “handful” of properties with mechanical floors in excess of 12’, and just one building with a 90’ FAR interval.  What is the motivation for setting the bar so low (25’, and 75’ respectively) overly accommodate these outliers?

These simple edits can yield a meaningful text amendment, which will have citywide reach beyond West 66th Street.  Without them, everyone’s efforts today, and over the past year of review are really only to curb one building where the DOB has already issued a Notice Intent to Revoke.  It is the Committee’s hope that this can be the first in a series of text amendments that expands to include amendments for addressing gerrymandered and sculpted zoning lots, residential buildings with internal structural voids such as atria, stilts, and exaggerated terraces and patios.

Of course, establishing height limits or three-dimensional FAR measurement would undermine many of these loopholes more simply.  In the absence of these obvious solutions, the LANDMARK WEST! Certificate of Appropriateness Committee suggests the City Planning Commission vote to APPROVE this Zoning Text Amendment with modifications.