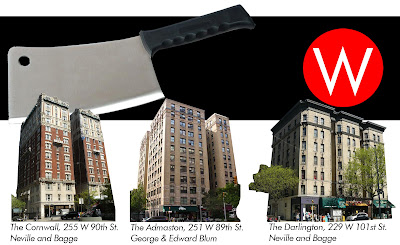 This Tuesday, the NYC Landmarks Preservation Commission will vote on
Riverside-West End Historic District Extension II
Please join us at 9:30 am the Commission, 1 Centre St, 9th Fl. to DEFEND the boundaries as-set in 2011
(please allow time for security check as there are often lines during the morning rush)
Your voice is vital in defending the integrity of this proposed historic district extension from
developer-friendly carve-outs that may include the entire West Side of Broadway, 109th Street and a whole city block from 95th to 96th Street, Riverside Drive to West End Avenue (see map below – the LPC has not released an official map of the reduced boundaries).  The LPC vote is scheduled to take place this Tuesday, June 23, at a public meeting – NOT a public hearing, so no public testimony will be taken.  We must SPEAK UP by SHOWING UP!
If you cannot attend, please write to the LPC (comments@lpc.nyc.gov, cc.landmarkwest@landmarkwest.org). Tell LPC Chair Meenakshi Srinivasan that you support the designation of the Riverside-West End Historic District Extension II in its entirety, as presented at the public hearing held in October 2011.  If the LPC believes boundary changes are necessary – on the merits – then a new public hearing should be scheduled!
The LPC’s failure to hold a public hearing on these substantial changes to the originally proposed district extension is challenged in a letter submitted by LANDMARK WEST! (see below) and letters from our colleagues at the Historic Districts Council and West End Preservation Society.
Council Member Helen Rosenthal, Manhattan Borough President Gale A. Brewer and NYS Assembly Member Daniel J. O’Donnell have also voiced their support for preserving the originally proposed boundaries.

Please SCROLL DOWN for LW! letter to Chair Srinivasan on this matter.

BREAKING NEWS!
“New York City Moves to Ease Landmark Backlog”
Even as LPC Chair Srinivasan plans to eliminate buildings from the proposed Riverside-West End Historic District Extension II, she has backed off another misguided initiative to “de-calendar” proposed landmarks en masse.  The Wall Street Journal reports, “The new chairwoman of the Landmarks Preservation Commission proposed six months ago to summarily wipe out a backlog of 95 pending landmark designations.”  But, in the face of united opposition from preservationists and elected officials, “Public hearings are now to be held this fall, and final decisions on most of the historic properties are due by the end of next year.”
The proposed Riverside-West End Historic District Extension II deserves the same level of transparency and due process!

June 19, 2015
Hon. Meenakshi Srinivasan
Chair
New York City Landmarks Preservation Commission
1 Centre Street, 9th Floor
New York, NY  10007
RE:  Riverside-West End Avenue Historic District Extension II
Dear Chair Srinivasan:
It is our understanding that, on Tuesday, June 23, 2015, the Landmarks Preservation Commission will hold a public meeting and vote on the designation of the Riverside-West End Historic District Extension II (heard on October 25, 2011).  It is also our understanding, however, that the district boundaries to be voted on will be substantially different from those considered at the October 2011 public hearing.  Specifically (although a map of the changes has not been publicly distributed) we understand that the boundaries of the new district extension will exclude buildings along the west side of Broadway, West 109th Street, and the entire block from 95th to 96th Street, between Riverside Drive and West End Avenue (the site of P.S. 75 and its playground).
We question the basis of this decision on the merits since, for example, a number of the buildings along Broadway were designed by the same architects – Neville & Bagge, George & Edward Blum, etc. – in the same era as many of the buildings elsewhere in the rest of the proposed district extension.  They are “of a piece” and contribute to the character and historical narrative of the area.
We also challenge the Commission’s process – namely, its failure to provide the public with a detailed map of the changes it proposes and the lack of a public hearing on those changes. The execution of such extensive changes without a public hearing is at odds with NYC Administrative Code §25-303 (“Establishment of landmarks, landmark sites, interior landmarks, scenic landmarks and historic districts”), which states:
For the purpose of effecting and furthering the protection, preservation, enhancement, perpetuation and use of landmarks, interior landmarks, scenic landmarks and historic districts, the commission shall have power, after a public hearing…(4) to designate historic districts and the location and boundaries thereof, and…to designate changes in such locations and boundaries… [emphasis added]
The district extension to be designated on June 23, 2015 will be significantly different from the district extension heard on October 25, 2011, and therefore requires a new public hearing.  Holding a public hearing on the revised historic district extension with redrawn boundaries imposes minimal burden on the Commission while providing a forum for the community input required before the Commission is authorized to designate the revised extension.  We strongly object to this decision to change the configuration of the proposed historic district being made by the LPC at a “public meeting” where the public will not be heard.
Furthermore, for the Commission to assume the general authority to redraw proposed historic districts after they are heard without first following rulemaking procedures would violate the City Administrative Procedures Act and recent Court of Appeals precedent.  See Matter of Council of the City of N.Y. v. Dep’t of Homeless Services of the City of N.Y., 22 N.Y. 3d 150, 153-54 (2013); City Charter §§ 1041 et seq.
Together with elected officials, colleague preservation organizations, and many property owners, neighbors and other stakeholders in this area, we reiterate our strong support for the Riverside-West End Historic District Extension II as originally proposed on October 25, 2011, and urge the Commission to designate it in its entirety.  Now that the Commission intends to vote on a revised extension with changed boundaries, we are entitled by law to register that support and voice our opposition in the strongest of terms to the exclusion of significant buildings from the district on the record at a public hearing.
Sincerely,
Kate Wood
President
cc:   Manhattan Borough President Gale Brewer
City Council Member Helen Rosenthal
New York State Senator Adriano Espaillat
New York Assembly Member Daniel J. O’Donnell
Executive Director Robert J. Freeman, NYS Committee on Open Government,
Department of State