Did You Know? SANITA HILLS CAMP

The 9th Avenue Elevated train line, known as the “el”, had its inaugural downtown run in 1871. By 1879 it ran all the way up to 104th Street, a  large-scale urban project devised to open up the potential of new business and residential development in what was then the under-developed Upper West Side. And did it ever. An UWS building frenzy was ignited in the 1870s that continued for decades.
When fully operational, the 9th Avenue el ran from Manhattan’s South Ferry to Kingsbridge Road in the Bronx. Initially powered by steam, it was fully electrified by 1903. Rides cost a nickel and trains rumbled overhead at up to 12mph. In 1896, 9th Avenue north of 59th Street was renamed the much more distinguished “Columbus Avenue”.
But 60 years on, this roadway in the sky–in addition to expanding growth of new enterprises and a vital UWS neighborhood– had created a loud, dirty, shadowed corridor along Columbus Avenue.
(LW note: Hmm…so the public didn’t enjoy/accept shadows on their public spaces then, either…)
In 1940, the 9th Avenue el, apart from a northern section that remained until 1958, was dismantled and replaced by a subway.
Do You Know: What happened to the train cars? 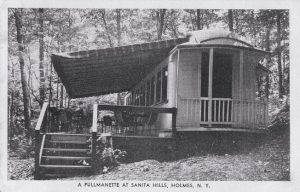 The answer to that question is directly linked to William F. Carey, Commissioner of NYC’s Department of Sanitation, who served under Mayor Fiorello La Guardia. A brash, bossy and creative leader, Commissioner Carey demonstrated admirable concern for his generally low paid workers known as the “White Wings” for their white uniforms.

Putting his ideals into action in the late 1930’s, Carey used proceeds of Sanitation Department vs. NYC Police Department ballgames played at Yankee Stadium to purchase a 100-room mansion with a large piece of land on Long Island and transformed it into a working class resort with upper-class amenities that members of the Sanitation Department and their families could enjoy.

This resort was short lived. Neighbors had the development ousted from the upscale neighborhood. A persistent man, Commissioner Carey pursued the idea in several other locations. Each time, the proposal was blocked by prospective neighbors.

Finally, with the help of Mayor La Guardia, FDR and Eleanor Roosevelt, he was able to purchase land in Pawling in Duchess County, NY. In the hamlet of Holmes, he set up what was to become known as Sanita Hills Camp. And the bungalows for use by sanitation workers and their families? None other than 9th Avenue el train cars! The Commissioner had dozens retro-fitted in NYC before hauling them upstate.

The Pawling property eventually had three camps: one for families, one for men and another for women. The complex also included a dining hall and recreation center along with expanding two small lakes for water sports. According to William B. Rhoads in his article, New York’s White Wings and the Great Saga of Sanita: “…the [train] car bodies retained much of their original appearance, including low clerestory windows in the roof. The open end platforms sometimes kept their old iron railings and break wheels, but were often fitted with simple wooden porch railings and steps. Typically, the long side of the car was shaded by a striped awning, creating a porch could be entered through a door cut into the center of this long side.” Rhoads went on to describe the interiors that had kitchens installed: “Those intended for family use had a central kitchen-dining area, a master bedroom and two berth children’s room. These interiors were trimmed with Philippine mahogany and equipped with electric refrigerator, tiled bathroom with shower and fluorescent lighting.” The sanitation workers paid low rent for the former el cars, referred to as “Pullmanettes,” and had access to a variety of recreational activities.  View photos of Sanita Hills Camp. 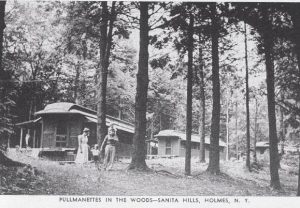 Do you have family memories or photos to share of the 9th Avenue el?
Upper West Sider Claudie Benjamin is putting together a walking tour for Landmark West of our stretch of the 9th Avenue el to enjoy when we can all gather together once again.  She’d love to enhance it with your anecdotes and photos–especially pics from the 1920’s and 1930’s of streets along Columbus Ave.  Email LW to share!
Email LW!
P.S. So whatever happened to Sanita?
A few years in, an investigation was launched into just how the Dept. of Sanitation was able to buy 1,100 acres of land and just who authorized the requisition of city train cars, not to mention the use of materials, supplies and city labor to build the resort. Mayor Fiorello LaGuardia ordered the department to get rid of the camp. It was donated to the Boy Scouts of America, which used it until the 1970’s. See photos here for some sad remnants, if you must.