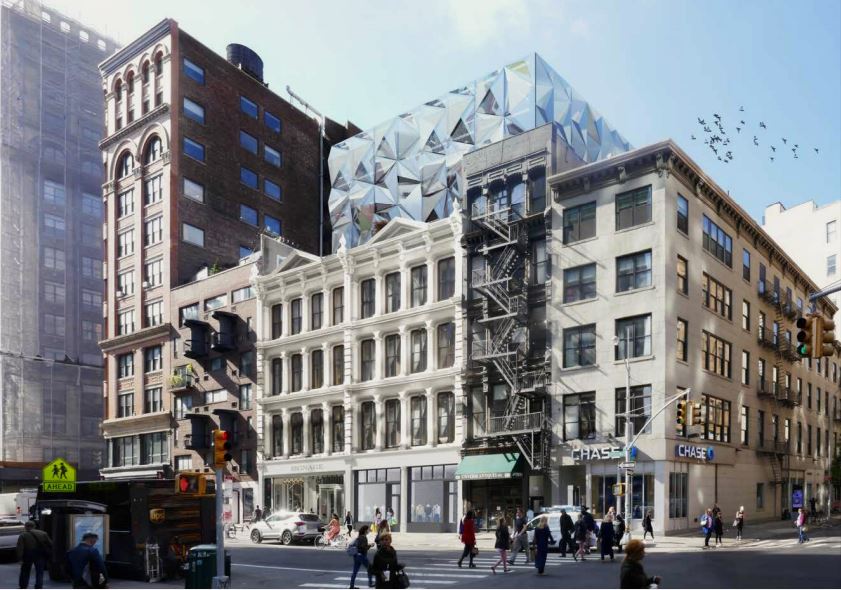 LANDMARK WEST! will be testifying at the Landmark Preservation Commission on January 9th for the denial of a Certificate of Appropriateness in which an applicant is proposing a new and intrusive addition to a new downtown landmark. You can read our testimony below:

The LW! Certificate of Appropriateness Committee wishes to comment on a pair of Italianate style commercial palaces with neo-Grec style elements, designed by Griffith Thomas, and built in 1866-67.  The application is to construct rooftop additions, and install storefronts and signage.

LANDMARK WEST! stands with our colleagues and echoes all that has been said in opposition to this proposal, and to the misguided logic erroneously employed to justify it.

The developer claims that the LPC holds no superpower to keep them from gutting this building. They argue that this building is only culturally, not architecturally significant. At the designation hearing, (less than three months ago), many of us spoke in favor of designation—on grounds of architectural merit as well as its cultural significance. In fact, at the landmark’s designation, all of the Commissioners themselves recognized the architectural and cultural value as well. The applicant’s misconception of even this recent history underscores the very premise of the preservation movement: to learn from and understand the past.

This idea that a landmark can be reduced to only its façade is a wild fallacy. Landmarks are structures, places, repositories of memory, and it is the LPC’s charge to protect them.  A C of A is about what is appropriate for a landmark, not what a developer can get away with.

Perching this ill-suited ice cube atop an elegantly proportioned, classically-influenced 1866 treasure would make no architectural sense. The applicant claims the cold, hulking box of mirrors dropped on top of these Broadway beauties calls to mind the work of Willem de Koonig, perhaps the landmark’s most famous inhabitant. Are they confusing Mr. de Koonig with Mr. Freeze from Batman? This clunky structure looks like a bad sci-fi effect—as if a cartoon supervillain where trying to trap this landmark in a block of ice.

Yes, there are worthy facets—pun intended. However, token patches of greenery cannot change the fact that this addition would overwhelm the landmark below. Additionally, the applicant’s attempt to mitigate this overwhelming effect by setting the addition back from the roofline is laughable considering the sheer hulking size of this icy Arctic tower—more than visible from the street below.

LANDMARK WEST! stands in opposition to this proposal and urges the Commission to deny this Certificate of Appropriateness.