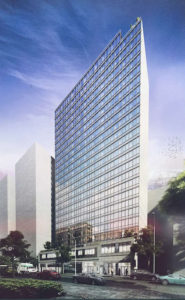 Council Member Helen Rosenthal, Assembly Member Dick Gottfried and Senator Brad Hoylman have chimed in on the development site on West 66th Street.  Noting that in talks between Council Member Helen Rosenthal, and the Community Board, Extell Development repeatedly evaded a response to “confirm if the current plans on file were, in fact, the final plans for the building”.  This lack of transparency gives credence to neighbor’s assertion that the rendering of a 25-story building depicted on the construction fence–(a rendering which not only shows in-congruent context, but also a reflection in its curtain wall facade which is in fact, not even across the street) is a falsehood.

LW! has previously discussed reports of additional air rights being assembled from the nearby Individual Landmark First Battery Armory (1900-1903, Horgan & Slattery), as well as from the contiguous Jewish Guild for the Blind.  Please catch up on this issue HERE, and read the full letter from the Electeds HERE.