Every Building Has HIS Story 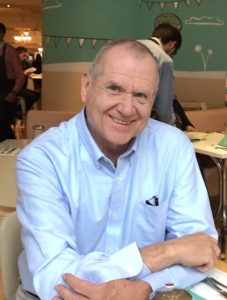 Interstate 70 crosses nearly the width of the continental US, but it also takes a lesser-known route–from Dayton, Ohio, to West 72nd Street.

As a child visiting his granddad, a budding urban explorer Tom Miller investigated the east end of Dayton, a neighborhood damned by eminent domain.  Miller surveyed the remnants of a community displaced, now doomed through legislation.  So many once-great homes, unlocked and abandoned, awaiting the inevitable.  Defined by their remaining contents, these buildings still held life for the curious mind.  The odd bits of furniture and loose housewares left behind pressed upon a young Miller to imagine the former owners who abandoned these innate bric-a-brac treasures.  Over time, the buildings would change, yet his investigations never ceased.

Thirteen years and over 3,774 posts ago, a matured curiosity and a relentless friend continued to nag at Tom Miller to harness his attentiveness to the built environment.  A blog was suggested, and once Miller learned what a blog even was, he prepared his first post, hastily typing in “Daytonian in Manhattan” when Blogger required a nom de plume to publish.  In the intervening years, Miller, who has not been to Dayton in several years, has turned his pastime into a passion that has grown into a responsibility of posting six buildings (or ‘statues and other points of interest that make Manhattan interesting’) each week.

To achieve this, Miller starts his day at 4 am and writes and researches no fewer than six hours a day, at least six days a week following his Ohio upbringing–a work ethic of efficiency, thrift, and truth that has resulted in a singular collection of building histories.  Although this avocation has already resulted in two published books, Seeking New York (2015) and Seeking Chicago (2019), another life path preceded them.  No stranger to writing, Miller was editor in chief of his high school yearbook and wrote for The Pilot, his high school newspaper, before pursuing Journalism and English Education majors. After teaching English at an inner-city Ohio high school, Tom Miller settled into office work and, post- 9/11, volunteered for the Auxiliary Force of the New York City Police Department.  Although he technically retired from the department, he is quick to correct ‘I never retired, I just switched jobs’ and now continues civic service through his research.

Part of his time with the Auxiliary Force was a Commander-in-Chief of the city-wide Ceremonial Unit at funerals and parades.  He often regaled his comrades in uniform about buildings’ histories and architectural features, often unprompted.  Today, he writes them down.  It is a gift that Miller cannot shut off.  Constantly researching, Miller reads incessantly but not what one might expect–the books he does read are often gifts from his sister, like Therese Anne Fowler’s A Well Behaved Woman: A Novel of the Vanderbilts or Doris Kearns Goodwin’s Team of Rivals: The Political Genius of Abraham Lincoln–printed word he readily consumes during flights.  The rest is often period documentation for his posts.

Initially intending to focus for six months–or perhaps a year–on Manhattan before reaching out to the boroughs, Miller was at the blog for three years before realizing that he would never run out of material–especially since only five of his six posts a week are of extant buildings–at least at the time of publication.  Assuming there are roughly one million buildings citywide, Miller is undaunted to hear that his impressive catalog of entries represents less than one-half of one percent of all buildings in New York City (again, not to mention the ‘statues and other points of interest that make Manhattan interesting’).

The discovery is the fun of it.  Always interested in vintage architecture, he began studying it in high school. Still, his vocabulary, which ranges from descriptive utterances such as dog-tooth brick to Greek Key and modillion band, is all self-taught.  Miller prefers a broad approach and warmly embraces the everyday.  While most architectural history focuses on significant structures, those histories do not necessarily reflect what happened within the physical walls.  He believes every building has a history–even the mundane ones, and more often than not, that history is quite dramatic.

With a smile, raised brow, and shaking head, Miller admits that after all, ‘with times being what they are – it’s very comfortable to spend time in the past’ but he just as readily regroups and counters that it was not all good–although often surprising.  Look at West 72nd Street…who would have imagined that such a sophisticated residential corridor ‘would become a nexus for organized crime during the prohibition era?’ he asks.

Despite that being one of the many questions addressed, his search often leads to ever more questions–some of which are intentionally ignored.

As thorough as his storytelling can be, Miller accepts the inevitable holes in historical records and even embraces them.  Take his inaugural Daytonian post; for example, The Old Ladies Come Down laments the literal Hitchcock-esque rear-window destruction of two Chelsea brownstones.  Unlike the histories that follow, this post has a noticeable vagueness.  No architects are listed.  The dates are approximate.  Life’s milestones go unreported.  Specificity is absent.  With over a decade of honed skills, Miller could likely decipher how early residents took their porridge or where they summered, but he is content with the abstract mystery of his lost neighbors.  History is essential in understanding our collective past, and yet, some history must remain a curiosity to nourish the imagination.  In this case, this first Daytonian in Manhattan post also serves as a reference for how far he has come, a stop on a journey begun on Interstate 70.