Fred Astaire on the Upper West Side 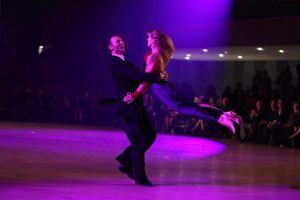 Darius and Jolanta at the Ohio Star Ball in 2018

Really too good, it’s like a stage set. Lights up: a 19th Century building, located right in the very heart of West 72nd Street, is entirely draped in dark, protective safety screening. Looking at the building from the curb, there are few signs of activity.  But, this quiet is misleading. An entry door is open. Music streams down from the second floor where ballroom dancing is being taught, by Fred Astaire Dance West Side Studio owners Darius and Jolanta Mosteika, their partner Val Grebenin, and their staff.  The lessons are currently on a limited schedule with strictly applied Covid-19 safety protocols.

This is a place not only to break the monotony of restricted Covid-era life, but to fully enjoy, even a limited hour of the company of another person.  “Psychologists who’ve been coming for years say dancing makes them feel better,” says Jolanta.

In 1992, Darius and Jolanta came to the Upper West Side from Lithuania which at the time was a part of the former Soviet Union. The couple, then 25-year-olds, with little English, already had a great reputation as ballroom champions.  They were contracted to teach at the Fred Astaire West Side Dance Studio, the first of the national franchise established in 1947 by the great dancer and a business partner. A year and a half later, Mosteikas became owners of the studio.

“Jolanta and I both started dancing at the age of eight in Kaunas, the second largest city in Lithuania.  Ballroom dancing always was and still is today very, very popular in Lithuania and elsewhere in Eastern Europe, and almost every grammar, middle and high school had a club or team.”

Tango, mambo, samba, foxtrot and waltz in varying styles are all taught here.  Clients have been coming for lessons over the past decades in preparation to shine on the dance floor at weddings, anniversaries and important birthday celebrations.

For others, competition is a key part of ballroom dancing.  Jolanta says that several of their long-time students started ballroom dancing as a hobby.  They later entered competitions and have won multiple National and World Dancesport Championships for their outstanding grace and style.

Speaking in general about competitions and music preferences, Darius says, “During the competitions, competitors have no personal choice of the music, whatever the DJ plays, you are dancing to it.  For the special performances, solos, showcases, we can choose our own music.  I’ve always tried to find something inspirational, powerful, classy with a new modern twist to it, like dancing my favorite dance – waltz, to an instrumental version of “Bohemian Rhapsody” played by the London Symphony Orchestra.

After emigrating to the United States, they consistently placed in the top two couples at the U.S. National Professional Standard Championships until their retirement at the end of the year 2000. Many other victories included International Championships in London, England.

Movie lovers and TV watchers may have seen Darius and Jolanta dance, not realizing their longtime presence on West 72nd Street.  Their stellar and championship performances at the Ohio Star Ball, winning the Show Dance Division in 1998, 1999 and 2000, were televised nationally on PBS.  In addition, they appeared in the feature films Dance With Me, and Strictly Ballroom.

Community service has long been an essential part of the Mosteikas’ role in the ballroom dancing world and Upper West Side.  Though these activities are currently on pause because of the pandemic, the Mosteika-managed non-profit has held large annual fundraising events to showcase ballroom dancing and to raise funds for groups like the Maxine Greene High School for Imaginative Inquiry at the Martin Luther King Educational complex. Free tickets to these events were also typically offered to nursing home residents and to others who might not otherwise have opportunities to attend live dance performances.

The couple have two children, a daughter who is a sophomore at Cornell University and a son who is a senior at the Dwight-Englewood School in Englewood, NJ. Our daughter has danced in the benefit performances,” says Jolanta. “Our son prefers tennis”.

Veiled for the past four years while roof to street level renovations are being completed, when the finished work is revealed, it will certainly merit a grand celebratory dance performance.