Helen Rosenthal at BSA: “I’m asking the BSA to…take a stand for our community and the zoning guidelines established to protect it.”

Council Member Helen Rosenthal gave testimony before the BSA on August 7 in support of Landmark West! and the community’s appeal against the permits for the 50 W. 66th Street proposed development. Her 8/8/2019 e-newsletter highlighted her position (emphasis added):

“I was proud to testify at the Board of Standards & Appeals this week in strong support of the application filed by Landmark West to revoke the building permit for the 50 W. 66th Street tower. The permit was granted by the NYC Dept of Buildings in April.

As I and other local elected officials have pointed out repeatedly, the permit relies on a flawed interpretation of the Zoning Resolution. This 775-foot tower simply does not conform with the zoning regulations of the Lincoln Square Special District, where it is located.

Our experience clearly shows that BSA’s process inherently favors developers. I’m asking the BSA in the strongest terms possible to step out of its narrow rules and take a stand for our community and the zoning guidelines established to protect it.” 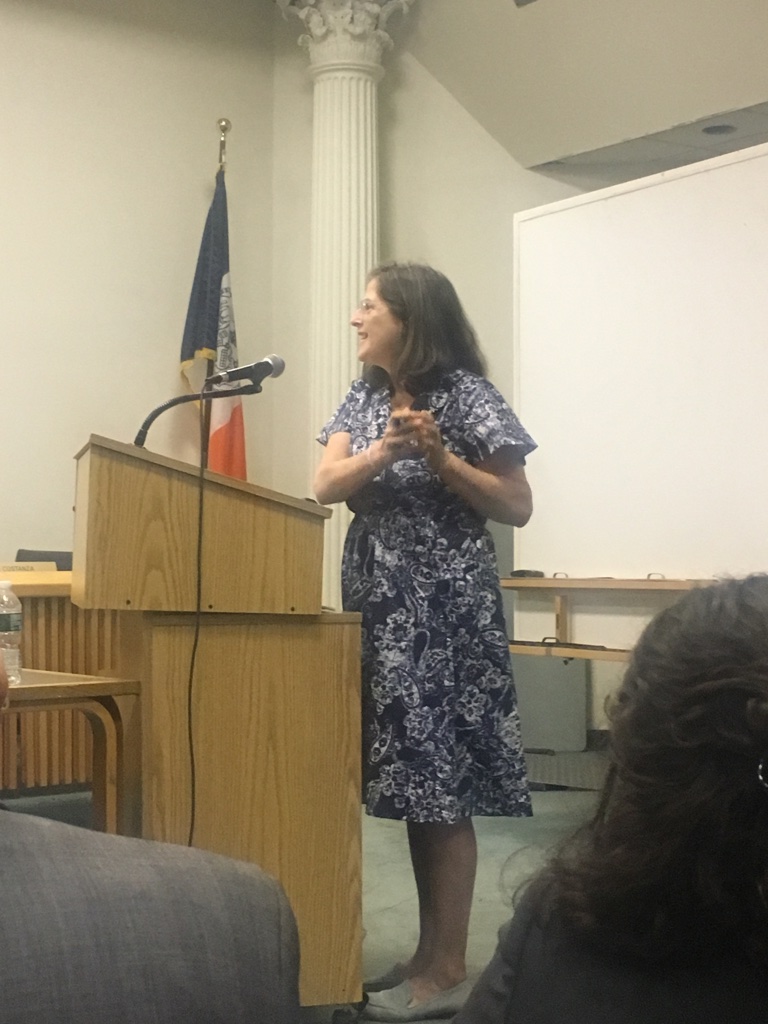 “In 1993, the City Planning Commission created rules for the Lincoln Square Special District which essentially limit buildings to around 30 stories in height by controlling their floor area and footprint. Extell’s decision to apply these guidelines inconsistently across a split zoning lot contradicts both the letter, and spirit, of the Special District regulations and the Zoning Resolution.

It’s also worth noting that the City’s negotiated settlement with Extell about their use of mechanical voids flies in the face of the recently approved zoning text amendment that caps mechanical voids at 25 feet, and requires that voids be no less than 75 feet apart.

As currently planned, this building will have 239 feet –almost 24 “typical stories”– of vertical void space, 196 feet of which are supposedly intended for mechanical purposes. In truth, these voids are not used for mechanical equipment, nor are they accessory uses to the residential space in the building.

This continues a pattern of incomplete and inaccurate information on the part of Extell. For well over two years, my office and the surrounding community have been pushing for transparency about what is to be built at the site. Despite initially filing plans for a 25-story building in 2016, Extell sought and has received approval for a 775-foot building.

Developers are not above the law. Selectively following zoning regulations in a way that undermines their clear purpose is unacceptable. Lincoln Square Special District guidelines restricting height must be fully enforced, plain and simple. If the City wishes to revisit this public policy goal and eliminate the Special District, the public is entitled to a straightforward and thorough discussion. Essentially dismantling the District through selective permitting decisions is disingenuous at best.

The BSA will meet again on September 10th and attorneys for both the developer and community will continue their arguments. By revoking the permit for 50 W. 66th Street, the BSA will be taking a very strong step toward ensuring the integrity of the land use and development process in New York City.”
~Helen Rosenthal statement in 8/8/2019 e-newsletter