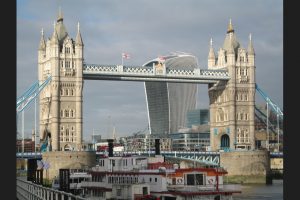 ‘Practically perfect in every way’, Historic England, a leading public organization in the UK that helps people care for, enjoy, and celebrate England’s spectacular historic environment, has announced a system of fail-safe design tools to help developers and architects avoid producing “ill-considered” skyscrapers.  In 2019, Londoners felt they were riding the coattails of New York City when Mayor de Blasio wrongfully announced his “ban on glass towers.”  However, a recent article published in Architect’s Journal shows that New Yorkers could stand to learn a lot from Historic England.  As stewards to England’s historic building stock, Historic England has published a set of guidelines for tall building development.

They understand the inevitability of tall building construction, but are advocating for a sense of responsibility.  These recommendations champion a “plan-led approach,” stressing the importance of context in regards to a new building’s historic surroundings, but also its context with other contemporary high-rises, praising purposeful “clusters” of skyscrapers over individual spires.  The guidelines also stress the importance of localized areas of height restriction.  Historic England argues that developments that respond to the local context, in regards to height, will be better received and considered more responsible.

Historic England’s guidelines could be well applied in New York City.  They prompt reconsideration of certain developments, such as Hudson Yards, which, under Historic England’s rationale, was responsibly developed in an area with little historic significance, in a large cluster, and at the edge of skyscraper-heavy Midtown West.  However, these recommendations also further condemn many other New York City developments, such as the supertalls that populate Billionaire’s Row on 57th Street, shadowing historic Central Park.  It seems that the thoughtful citizens of England, New York, and the world are done with “ill-considered” skyscrapers, and Historic England’s new guidelines are a step in the right direction.

If you wish to help Landmark West! in the fight to stop “ill-considered” skyscrapers, learn more at our Supertalls page and Support Our Advocacy Efforts.