In his father’s footsteps on West 72nd Street 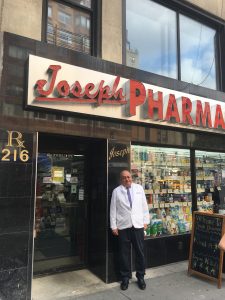 Pharmacist Shoukry Elfahawy came to New York from Cairo, Egypt in 1969 to make a better life for his family.  Once earning the required NYS license, he acquired Bell Pharmacy in 1972, a business that was already established on the south side of West 72nd Street.  The Elfahawys lived in Queens. Shoukry commuted to the Upper West Side every day by car. Shoukry’’s son Sharif, who already had a newspaper delivery route, began at age 14 working for his father after school, on weekends and in the summer getting there on the subway.

He learned every aspect of the pharmacy business from stocking the shelves to delivering prescriptions to customers’ apartments.  Hugely observant, he appreciated how well his father interacted with customers, knew their names and the names of their children.  “I liked the way he communicated and managed the business,” he says. There was no question.  He wanted to become a pharmacist like his Dad.

Over a ten-year period, Shoukry enlarged his business by adding two pharmacies in Queens and giving up the place on West 72nd Street.  Sharif had earned his own Pharmacy degree in 1982 at St. John’s University in Queens, he worked for a while at family pharmacies there, while knowing his true ambition was to return to the Upper West Side.  And, it happened.  Amazingly, in 1992, a space became available at 216 West 72nd Street right next door to the address once occupied by the Bell Pharmacy.  Shoukry had passed away in 1988.

Sharif named the new business Joseph Pharmacy, using his grandfather’s name because it was simpler to pronounce than his father’s. It was bigger than the earlier business. Years had passed and people expected slightly different supplies than they had earlier, “But, we got back almost all of our old customers,” says Sharif.

Over the past ten years, he’s taken on some different roles than in the past, for example, in giving flu and Shingles vaccinations and most recently, the Covid vaccine.  Sharif’s wife works from home as the bookkeeper.

There’s a special joyfulness that accompanies the person who feels they’re achieving what they’ve always wanted to do.  That’s the feeling you get speaking with Sharif in a hard to find quiet spot in the very busy pharmacy.  It’s likely the same feeling Shoukry communicated to his son, inspiring him to become a pharmacist and work in nearly the same spot as his father.