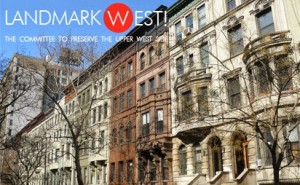 Here is, in full, LANDMARK WEST’s letter to Carl Weisbrod, Chair of the New York City Planning Commission, regarding the NYC Planning Proposal titled ‘Zoning for Quality and Affordability’

LANDMARK WEST! is deeply concerned about the damaging potential of the so-called “Zoning for Quality and Affordability,” a top-down, sweeping initiative put forward by the New York City Department of City Planning.

Over the past four decades, the Upper West Side community has worked hard to preserve the character and quality of life that make our neighborhood both beautiful and livable. With the leadership and support of our elected officials, we have succeeded in protecting numerous landmarks and historic districts as well as establishing extensive contextual zoning districts.

Elliott Sclar (now director of the Center for Sustainable Urban Development, The Earth Institute, Columbia University) wrote about the Upper West Side in 2003:

The contextual zoning and landmark designations that guide this neighborhood’s growth and change (and the neighborhood has grown and changed) were thoughtfully designed and democratically adopted policies intended to fairly balance the maintenance of this neighborhood’s charms with the real needs for added development. [emphasis added]

Sclar referred to the 1984 zoning amendments that created contextual districts between West 68th and 86th Streets. In 2007, the Upper West Side community advocated for — and achieved — the extension of contextual protections to the area between West 97th and 110th Streets. Both actions were carefully studied and adopted to fit the unique character and needs of the Upper West Side.

The City’s current proposed plan would gut these neighborhood protections — with no analysis of the specific impacts on our neighborhood or any of the many other neighborhoods across the city from Sunnyside-Woodside to Park Slope, Bedford-Stuyvesant to Sunset Park, the Upper East Side to Greenwich Village, the Upper West Side to Pelham Gardens — by creating the potential for 20-30% height increases for new development.

And for what benefit? As much as New York City needs affordable housing, senior living and architectural quality, it also needs assurances. The City’s plan is long on laudable goals, but short on mechanisms for actually achieving — and sustaining — them. The one-size-fits-all solution is simply, “Build more.” At best, the stated policy goals are wishful thinking. At worst, they provide cover for what is, in reality, a massive giveaway to developers.

Affordable housing: Inclusionary housing — the primary vehicle advanced by this proposal — accounted for only 1.7% of new housing growth between 2005 and 2013 according to New York City Council Member Brad Lander’s Inclusionary Zoning in New York City report. Under the proposed zoning amendments, the City predicts the creation of 8,000 affordable units a year for ten years, far short of the current demand. Furthermore, the proposal disregards the demonstrated link between inclusionary housing and loss of existing affordable units.

The Environmental Impact Statement (EIS) must meaningfully address the probability that new construction facilitated by this proposal will cause the demolition of existing buildings containing affordable housing units and speed the process of neighborhood gentrification that further reduces affordability.

Architectural quality: Past attempts to zone “good architecture” have been unsuccessful. The best architect-developer teams find ways to produce brilliant designs within given constraints. The worst seek only to maximize floor area. Contextual zoning is designed to protect the form and scale of existing architecture, which communities, by consensus, have sought to preserve.

The EIS must address the fact that raising height limits will inevitably lead to the erosion of this form and scale as well as to the loss of individual buildings that exhibit architectural quality. The City must perform a survey of historic resources that could be affected by this proposal, as well as buildings that, while they may not rise to the level of landmark designation or listing on the State and National Registers of Historic Place, possess the kinds of good design traits the proposal seeks to encourage (e.g., texture).

LANDMARK WEST! is also concerned about changes to rear setback requirements that would result in greater bulk in the collective rear yard “doughnut”, obliterating the historic footprint and decreasing open space on the interiors of these blocks. The EIS must study this impact too.

Prototypes: We have fundamental concerns about the efficacy of evaluating real-world impacts through the use of prototypes. This proposal would significantly change zoning that was adopted only after a careful building-by-building, block-by-block, neighborhood-by-neighborhood analysis without anywhere near the same level of study.

The EIS must include a prototype analysis for every foreseeable scenario in each zoning district included in the proposal. Worst -case scenarios must be among these analyses. For example, there is no prototype for anticipated new construction in R8B districts, though according to the table on page 63 of the “Draft Scope of Work” (Figure 16), R8B base and overall heights would be increased.

Discretionary Review: The proposal provides for unchecked authority of “discretionary review” for hereto now undefined “constrained lots”. Without precise definitions, there is unlimited potential for abuse of power as the very premise of zoning is in fact, a constraint and therefore there is conceivably no limit to what qualifies as a “constrained lot”.

These are only a few of the questions that come up during a first, close review of this proposal — and without the benefit of seeing the actual zoning text that would implement it (the Department of City Planning has yet to release the text). In the case that these questions cannot be satisfactorily answered in the scope of the proposed action, we urge the City to leave the existing zoning districts in place and consider the possibility of creating new zoning districts, with the features described by this proposal, that can be adequately studied and, where appropriate, adopted in specific areas.

Already, the Upper West Side is experiencing a building boom of unprecedented scale. “As-of-right” towers in excess of 600 feet — a height more appropriate to Hudson Yards or the heart of midtown Manhattan — are in the planning stages for our avenues and side streets. This reality is before the additional new multipliers advanced by the City’s proposal, which would raise these heights by 100+ feet, the equivalent of 10+ additional stories. The proposed zoning amendments would exacerbate existing trends and transform our neighborhood context, without providing residents and property owners information and analysis to understand direct impacts on them. The plan will destroy existing scale and quality of life for the sake of broad policy goals — the abstract “public” — that may or may not ever be realized.

Instead of a universal, one-size-fits-all set of amendments, LANDMARK WEST! calls for a more fine-grained approach that carefully studies neighborhoods to determine specific needs and potential impacts.