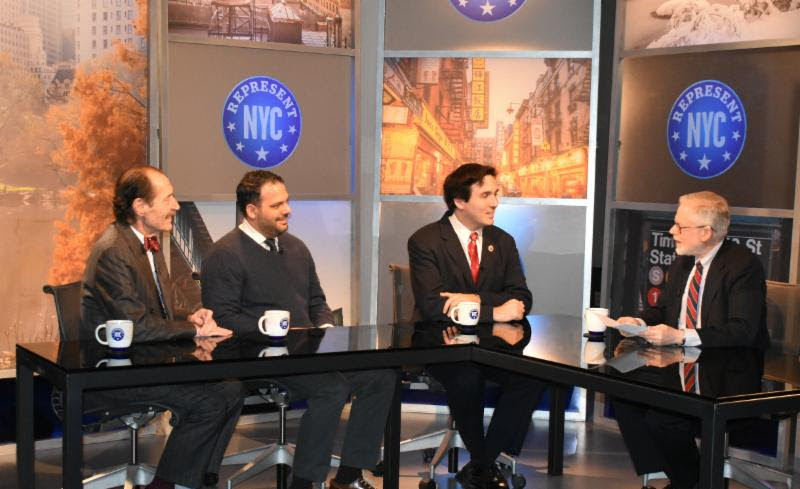 LANDMARK WEST!’s Sean Khorsandi (2nd from left) discusses the threat posed to many communities by supertall buildings and overdevelopment with Assembly Member Dick Gottfried, NYC Council Member Ben Kallos, and Mario Messina of the 29th Street Assoc. The program airs on the Manhattan Neighborhood Network on Sunday, March 10 at 7 p.m. and Wednesday, March 13 at 9 p.m.

LANDMARK WEST! has been raising the alarm against

loopholes exploited by developers on the UWS and across the city to dramatically increase building heights.
Local elected officials have added their voices:

“BE IT RESOLVED that Community Board 7/Manhattan approves the Residential Mechanical Void text amendment contained in the DCP document dated January 28, 2019, subject to the comments and specific recommendations identified above.”

~Community Board 7 at its March 6 full board meeting
“‘Mechanical void’ is developer-speak for ‘make more money,’…The City cannot allow developers to run rings around the Zoning Resolution and permanently damage
the character of our streetscapes and neighborhoods in the process.”
~Manhattan Borough President Gale Brewer
“What we are trying to do is do a comprehensive review
and address the gaps that developers have been so successful at taking advantage of.”
~Assemblywoman Linda Rosenthal
“We’re saying no to empty buildings filled with voids
simply to give the 1% better views while
leaving the rest of us in their shadow.”

~Councilman Ben Kallos
“…developers [take] advantage of zoning loopholes to construct supertall buildings that are out of character with their surrounding residential neighborhoods, and which would otherwise be prohibited under city zoning rules.”

~State Senator Liz Krueger
“On January 25, the New York City Department of City Planning proposed a zoning text amendment to eliminate the “mechanical void” loophole on a systematic, comprehensive basis.  Although I believe even stronger protections are necessary to defend communities from the wave of supertall buildings that threatens to overwhelm many neighborhoods in the city, I will be offering testimony in support of the amendment.”

COME OUT for the

Department of City Planning (DCP)
hearing on the

LANDMARK WEST! will testify in support of reining in the voids on March 13th.  We will request that DCP reduce the void height to 12′-14′ and the interval between eligible voids to 200′,

to better ensure that height is being used for the purposes intended, not merely to improve views and values.  Moreover, it would be a substantive and meaningful step towards closing loopholes in the zoning code.
Can’t attend in person?  Write your concerns to the City Planning Commission following their guidelines.