Living Atop the Oliver Cromwell 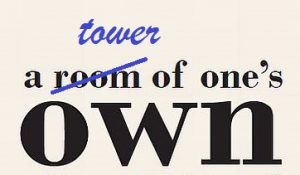 In these days of staying in and laying low, we are all grateful to have a space somewhere to hunker down. A room of one’s own.  Or, in the case of a very few, a tower.

Central Park West is known world-wide for its iconic twin-towered Emery Roth buildings of the 1920’s. Naturally, we expect these aeries to be reserved for those who can most afford their space, air, and light: Helen Gurley Brown’s apartment spread out over 4 floors (yet held just 2 bedrooms) in the South/East tower of The Beresford; Demi Moore’s recently sold 7,000-square-feet South Tower triplex at the San Remo is the only apartment remaining from the building’s original 1927 design (the other duplexes were subdivided in the Depression); novelist Sinclair Lewis once chose a tower apartment in the El Dorado for its terrace views of every bridge in the city (note that only the “tip top” of the El Dorado’s south tower is habitable; the top of the north tower houses a water tank).

However, it’s nice to know that there are a few mere mortals who lived “once upon a time” in a CPW tower of their own.  Author Owen Edwards tells the tale of the day he climbed the three extra flights up into the eagle’s nest apartment of the Roth-designed building: The Oliver Cromwell at 12 West 72nd Street. 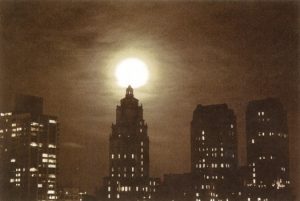 “My tower-apartment was on the 30th floor of a building on the Upper West Side named after the ambitious regicide Oliver Cromwell. Essentially one big room, the place was originally a gymnasium back when the building had been a residence hotel. So although it had only 600 or so square feet, the ceilings soared high, and there were windows and a balcony all around, with views of the Hudson River, Central Park and the Midtown massif. The place occupied the entire floor, so we had no next-door or upstairs neighbors. The elevator stopped at the 27th floor, and three flights of a dingy stairway led up to the door of No. 30, which gave us a feeling of splendid isolation.“ 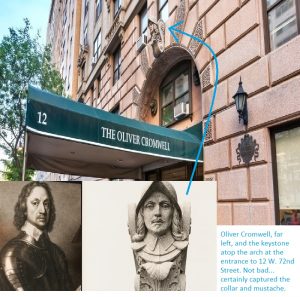 “How did I attain my tower? Many years after my Jersey youth, and after a period of living in Europe, I was working at a magazine in New York, and patching life together after a divorce. I was looking for a new place to live, and the search was increasingly desperate, as apartment searches in New York usually are. One day, my assistant came into my office and told me that a friend of hers had an apartment on West 72nd that he wanted to sublet. I was about to sign a lease for a place in Little Italy so gloomy that the bedroom had no window, and I was tired of looking. So I told her I’d pass. She insisted, however, and since she was more or less running my life, I agreed to take a look. Climbing the drab stairs, I held out little hope. But when my assistant’s friend opened the door, ushering me into the bright, white space with its wraparound views, I was hooked. Eventually, I inherited the lease, and in 1980, I bought the place for … well, never mind how much, but the price wouldn’t buy a parking place in today’s Manhattan.“ 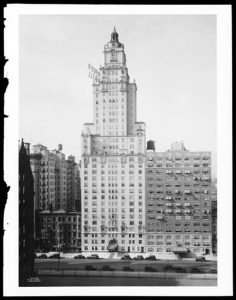 The Oliver Cromwell c. 1929: Museum of the City of New York

The Oliver Cromwell is one of Manhattan’s finest free-standing towers of the 1920’s. It also has quite a nice view from the tower…

Note: LW! was pleased to learn from the Emery Roth family that The Oliver Cromwell was, apparently, Mr. Roth’s favorite building!