In 1993, LANDMARK WEST! commissioned the Environmental Simulation Center at the New School to build a model of the Lincoln Square area.  At a whopping 10′ x 12′ it was exhibited at the Apple Bank of Savings so that neighbors could come and see what was being proposed for their neighborhood.  The model, seen as an educational tool helped inform the City’s discussions of the Lincoln Square Special District zoning–an effort being rendered meaningless given current development plans.

The simulation created three options for each of the six development sites marked:

For each of six sites considered prime for new development, there will be three different renditions of buildings — one built under current zoning laws, one under a new proposal by the City Planning Department and one under a counter-proposal by neighborhood groups including Community Board 7 and Landmark West!

–as of 2019, all of the sites have been redeveloped save for the ABC assemblage, which comprises nearly half of the C4-7 zoned section on the north of the 36 West 66th Street development site.  Read below or via New York Times LINK. 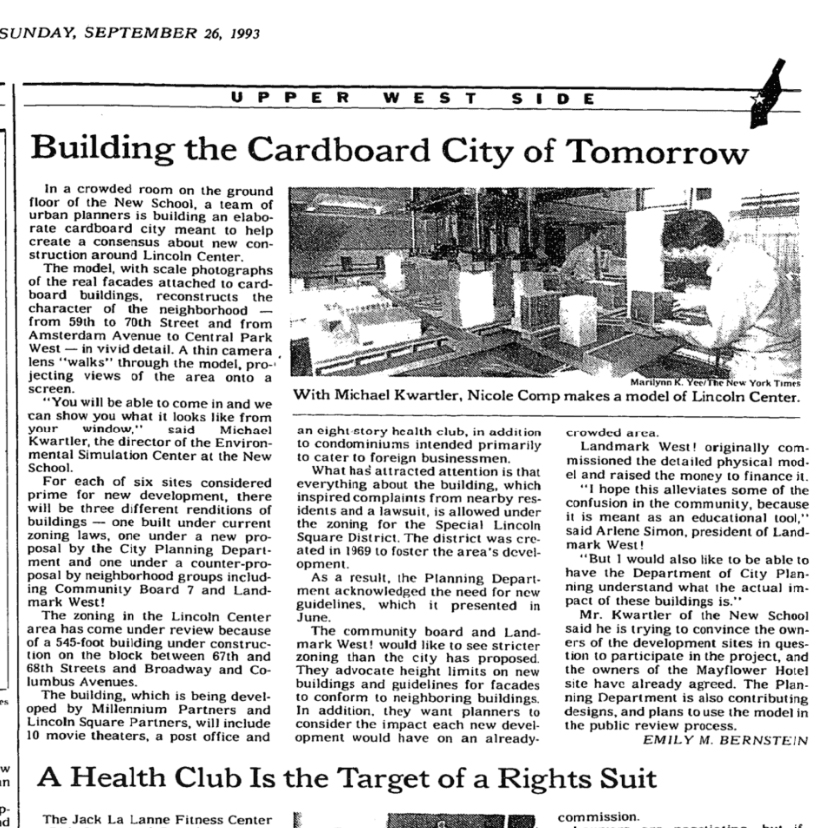 The model was prepared to combat what the then-City Planning Commissioner Joseph B. Rose called ‘out of scale with the traditional character of the Upper West Side’…fast forward 25 years and the discussions are largely the same!  As developers touted a new ‘urban entertainment center’ with community options such as a “Reebok Gymnaseum [sic], a Reebok store, a Coconuts music and video store…” and a Barnes and Noble–options which are “very good for the quality of life in New York and wonderful amenities for the people on the West Side”, the community fought back.  Former community board chairwoman and LW! board member, the late Elizabeth Starkey is quoted in the New York Times of Sunday, April 17, 1994 as saying:

The previous zoning led to an unexpected result…we woke up one morning to find that the Upper West Side had become an ‘urban entertainment center’.  This was a great shock to everyone.  It’s not exactly what we had in mind.  I think all of us, Lincoln Center and the various developers and owners, need to look at this together and effect some kind of change

Needless to say, the change was a reconsideration of the Lincoln Square Special District Zoning–a change that is permitting–under the developer’s current interpretation–what may become the tallest building in the neighborhood, and on the Island of Manhattan north of the Time Warner Center.  The goals sought a coherent plan which considered logistical issues such as “transportation capacity and sewage capacity”–concerns never addressed publicly by the community board as West 66th Street continues on its path of self-proclaimed “as-of-right” construction.

The rules didn’t work in 1994, and a subsequent strengthening of the rules governing design limits within the Special District are still challenged today.  LANDMARK WEST! continues to argue for the intent of the Zoning Resolution as those in City Planning remain idle.  In the end, the purpose of the fight now is as it was then, initially said by then-president of LANDMARK WEST! Arlene Simon:

Over the long term, what it is about is the quality of life.  Quality of life is worth something, and you lose so much by destroying it.  And it is also about being a good neighbor.  A good  neighbor enhances the location, and rel estate after all, is location

September 10th, the arguments continue at the BSA, the only difference is the developers are even bolder in their grab for the sky and domination of the neighborhood.