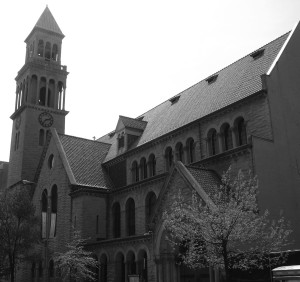 After years of being deferred, the New York City Landmarks Preservation Commission has been in the process of reviewing 95 of its “Backlog” items that have languished on the LPC calendar for more than five years.  Although they initially wanted to just remove these items from the calendar, the public pushed back and over a series of four special sessions in late 2015, the LPC heard testimony on each of the backlog sites.

LANDMARK WEST! prepared a unique website for each of these important landmarks in waiting which have long been on our LANDMARK WEST Wish List.  And people noticed.  The New York Landmarks Conservancy came out in support of both of our UWS sites based on merit as did famous architects and historians from across the city.  Samples of their statements for St. Michael’s Episcopal Church Complex, (first hard in 1980) include:

No important decision is made quickly, and while St. Michael’s may have taken the long road to designation, this day comes at just the right time to demonstrate the positive motives for historic preservation    Architect Page Ayres Cowley

I believe that St. Michael’s is the oldest institution in its original location north of 59th Street in Manhattan…not only is this church itself of very significant architectural merit, but also its entire campus.  As an institutional church, the parish house where so much innovative social outreach occurred.  The buildings form a coherent whole, and cannot be divorced from each other, aesthetically or historically.   Former LPC Commissioner, Stephen Byrns

Or, you can read their full testimony here, and here.  The IRT Powerhouse, (first heard in 1979) had equally strong sentiments:

By virtue of its vast interior spaces, its location, and its compelling industrial beauty, the powerhouse has the potential to serve us in many ways. Should Con Edison move on, it’s easy to imagine the building entering a new phase of life as an amenity for the entire city—a museum, a mixed-use center—who can predict?  But one thing is certain: it needs to be preserved   Architect Robert A. M. Stern 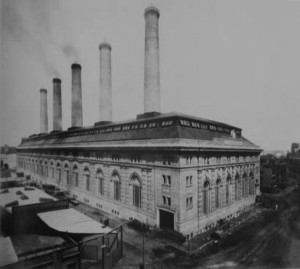 The IRT Powerhouse by McKim Mead and White

LANDMARK WEST! has long agreed with these statements and advocated for the preservation of these neighborhood-defining sites on the Upper West Side.  In both cases, owners came out to the hearings and advocated against full preservation.  In the case of the IRT Powerhouse, current owner, Consolidated Edison requested that the LPC not designated their site but prefers the current state of limbo where they consult the LPC when they want to make changes.  For St. Michael’s, Reverend Katherline G. Flexer advocated for designation of the church itself, but not the Parish House nor the Rectory, although all three were designed by the same architect, Robert W. Gibson.

Luckily for these buildings, the LPC is to vote based on MERIT, not based upon owner consent, in accordance with their mission:

Mission of the Landmarks Preservation Commission

The Landmarks Preservation Commission is the New York City agency responsible for identifying and designating the city’s landmarks and the buildings in the city’s historic districts. The Commission also regulates changes to designated buildings. The agency consists of eleven Commissioners and about fifty full-time staff members, including architects, architectural historians, restoration specialists, planners, and archaeologists, as well as administrative, legal, and clerical personnel. Although it is one of the smallest New York City agencies, the Commission is the largest municipal preservation agency in the United States. The Landmarks Preservation Commission was established by the Landmarks Law in 1965 in order to:

These sites clearly meet the criteria.  We hope the LPC steps up to their principles on February 23rd.

The LPC will now take action on these, and all 95 properties that were subject of the attempted decalendar.  Come to the LPC meeting on Tuesday, February 23rd (time TBA) to witness history.

For more background on the attempted decalendaring, read on:

In December of 2014, the LPC panned to “de-calendar” nearly 100 sites across the city, removing them from consideration as potential landmarks and ending the protections that come with that consideration.  Among the buildings to be removed – without a public hearing – were the UPPER WEST SIDE’s own former IRT POWER HOUSE (see above) and St. Michael’s Episcopal Church (with windows by Louis Comfort Tiffany).  Other noteworthy sites on the list include the Pepsi sign in Long Island City, Greenwood Cemetery in Brooklyn, five Broadway theaters and early 19th-Century structures in Staten Island.

Strong pushback from the public – people like you! – saved these places.  The LPC withdrew its misconceived plan, and the buildings stayed on the calendar.

But not forever…a few weeks later the LPC announced that it was “seeking public input on its need to address the backlog of properties that have been heard in public hearings but have not been designated or acted upon.” Special emphasis is given to the “articulation of standards for identifying which properties should be issued No Action Letters” – that is, which buildings should be “de-calendared.”

Same wolf, different clothing.  Once again, the LPC states that these calendar items would be cleared “without reference to merit.” This is cold comfort if (make that when) developers move swiftly to destroy these places as soon as their protections are removed.

Here are a LIST and MAPS of properties that may be lost.

The decisions on February 23rd will be a milestone in a long process which for some of these sites has been under consideration and community efforts for over 20 years.  We hope you join us at the LPC, in the Municipal Building, 1 Centre Street, 9th Fl. North for this important meeting.

Further details of the Backlog Initiative can be accessed on the LPC website.