LW! friend and historian Tom Miller (aka the Daytonian in Manhattan) painted an engrossing picture of the development of the Upper West Side on the blocks between West End Avenue and Riverside Drive in the late 1890s including lanes used by cows to mosey over to the river for a drink and the havoc the muddy dirt streets must have played with a Victorian lady’s long skirts.

Researcher Allison Henry contributed her excellent article on Clarence True, “The Magnate Messiah of the Upper West Side” and Vandenberg shared this interview with a woman who lived in that very house from the 1920’s-50’s. 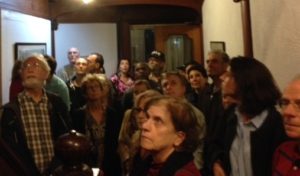 Thank you all for coming out!  We hope to see you again soon at another LW! Architectural History Spotlight tour!