Milton Glaser: NY Times Calls Him a “Lion”, We Call Him a “Hero”

In July 2016, The New York Times featured Milton in the first of a series called “Lions of New York” focused on New Yorkers who led the city’s “renaissance” in response to “the crises of the 1970s and ‘80s”:

Mr. Glaser, 87, created one of the most potent designs of the last century: I ♥ NY, a rallying symbol for New York when the city and state were in crisis in 1977.

Much to our shared pride and benefit, Milton did the same for the Upper West Side by designing the LW! logo and the marvelous poster design, “The Decline of the West (and how to prevent it)” used by LW! to raise awareness about the very first public hearing—on January 12, 1988, before the NYC Landmarks Preservation Commission—to consider protecting the Upper West Side/Central Park West Historic District (officially designated in 1990). The hearing lasted over 15 hours(!). Milton’s designs have endured for decades, as fresh and energizing as the day he created them. 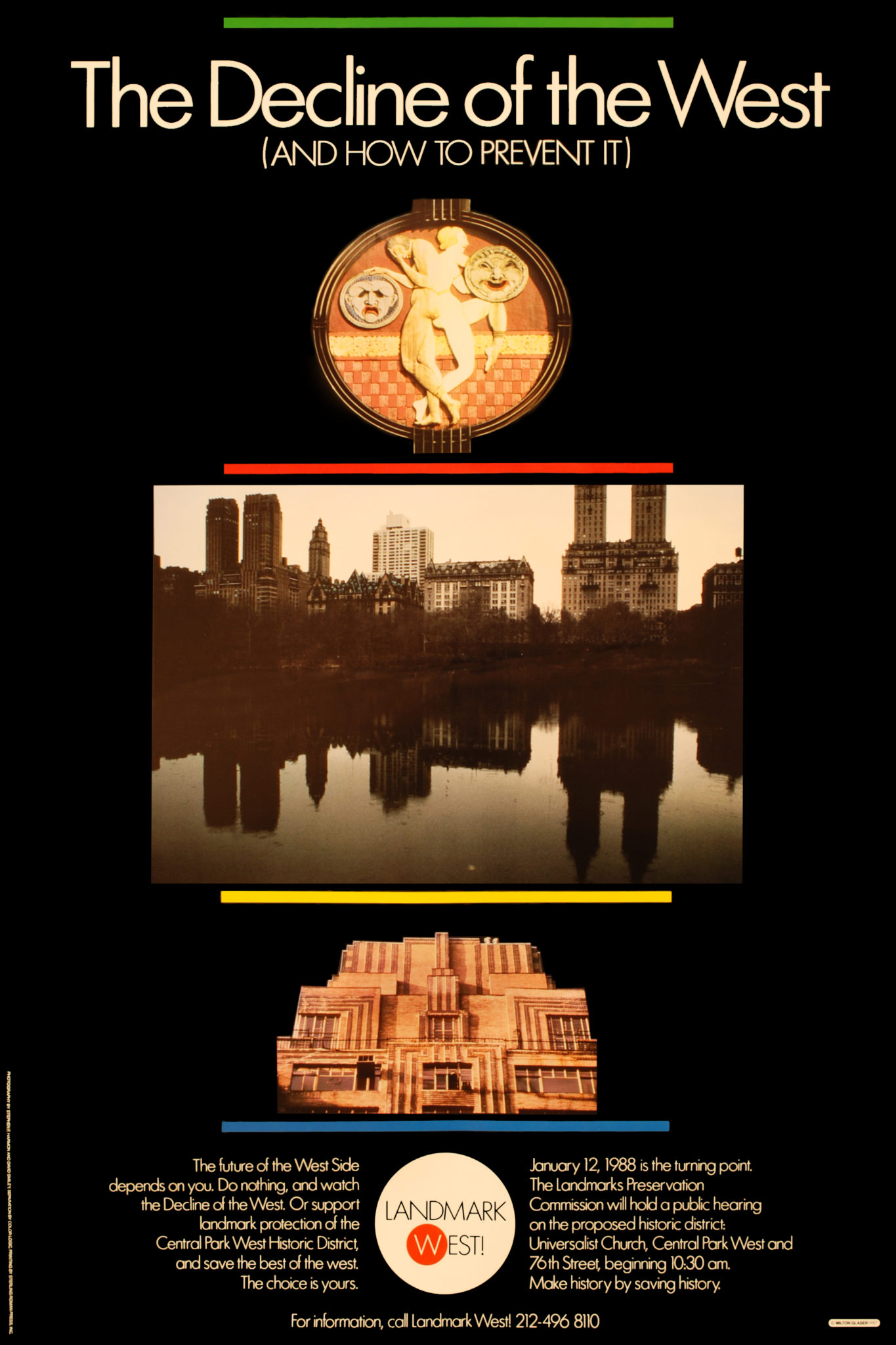 Among Milton’s many contributions to our city’s cultural life is New York magazine, which he co-founded in 1968. We are delighted that the magazine’s current architectural critic, Justin Davidson, will emcee our 2016 “Unsung Heroes” awards ceremony!  This year’s event will take place on Monday, September 19, from 7pm to 9pm at Tavern on the Green.

In the Times article, Milton strikes a note of caution:

There’s some fundamental misjudgment about the balance between ordinary people and people who make enormous amounts of money.

“Unsung Heroes” is one way LW! aims to reset the balance, by calling much-deserved attention to the “ordinary people” whose passion, creativity, and perseverance fuel the engine that drives New York.

From the 2011 “Unsung Heroes of the Upper West Side” program:

For anyone who’s ever wondered why the LANDMARK WEST! logo ends with an exclamation point, tonight’s your night for answers. How, you might be pondering, was LW! ever so lucky as to work with a world-renowned graphic artist like Milton Glaser? It’s simple: Milton Glaser is a West Sider to the core. Along with his wife Shirley, Milton was a longtime resident of West 67th Street (from 1977 to 2007). With the founding of LANDMARK WEST! in 1985, he lent his graphic talents to a young organization dedicated to preserving the neighborhood he and Shirley loved. Twenty five years later, his LW! logo continues to motivate and inspire us. Milton co-founded the revolutionary Pushpin Studios in 1954, co-founded New York Magazine in 1968, established Milton Glaser, Inc. in 1974–a very busy twenty years. Throughout his career, Milton has been a prolific creator of posters and prints and a celebrated graphic designer (does “I [heart] NY” ring a bell?). Among many awards throughout the years, Milton has received the 2004 Lifetime Achievement Award from the Smithsonian Cooper-Hewitt, National Design Museum, and the 2009 National Medal of Arts from President Barack Obama. Tonight, it is we, the Upper West Side community, who add to his list of accomplishments and accolades the mantle of Hero.