Mixed Forecast Ahead for 200 Amsterdam Avenue 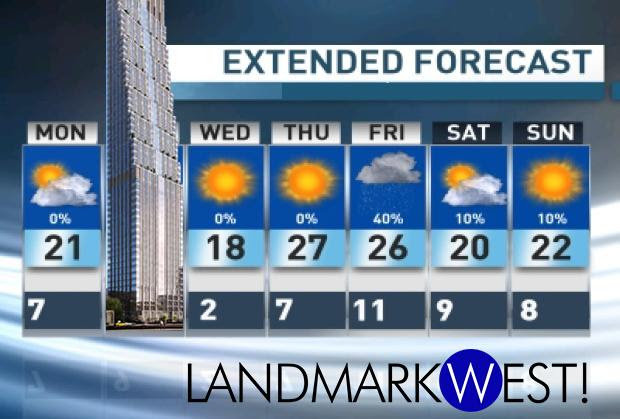 LANDMARK WEST! and Committee for Environmentally Sound Development, along with many elected officials, have questioned the development proposal for the former Lincoln Square Synagogue site at 200 Amsterdam Avenue.
Slated to rise 668-feet high, the 52-story luxury residential condominium tower would stand cornice-to-cornice with a typical 66-story midtown office tower.  But is it legal?
In a letter dated March 9th submitted to the BSA, the Department of Buildings discusses the rationale it used to initially issue permits, but concedes that their interpretation of the law as defined by a 1978 Departmental Memorandum known as the “Minkin Memo” was incorrect.  In the letter, the Assistant General Counsel of the NYC Department of Buildings carefully reviews how the intent of the Zoning Resolution is not to allow zoning lots to consist of partial tax lots, and even emphasizes that:
The Evidence, that Zoning Lots Can Consist of Partial Tax Lots,
Which the Department Previously Relied Upon, Is Incorrect
Thus, a building lot like 200 Amsterdam Avenue should never have been granted permits under the zoning law.  Recognizing its error, the DOB even drafted a Department Bulletin this year to supersede Minkin and clarify that when the Zoning Resolution refers to “one or more tax lots” it does not mean “parts of tax lots” so that this scenario never happens again.
All seemingly good news, right?
Counsel continues: The validation of this claim is the admission that “documents are recorded in order to provide proper notice to the public [and in this instance the documents create] unwarranted confusion, a lack of transparency and undermines the concept of notice and protection that recording aims to preserve”.
Great! They see it clearly now!
They even agree with the challenges that: “To the extent there are to be parking spaces in the rear yard of the Proposed Building, the applicant must remove them or submit revised plans…” so as to not “double-dip” their rear yard requirement.
FANTASTIC! The Challengers are right, but then…
The Department requests that the BSA affirm their prior determination to issue the Permit.  (!?!)
WHY, you might ask?
The DOB is claiming that “Not Applying the Department’s Old Interpretation of “Zoning Lot” in the Instant Case Would be Arbitrary and Capricious”  However, precedent has proven if there is a rational basis explaining how an interpretation came to be (as has been included in the DOB’s self-produced memo) the DOB IS in fact permitted to correct an error of the law and IS NOT required to continue on their flawed path.
READ a litany of pertinent legal decisions supporting this on our BLOG HERE.
Ultimately, will there be clear skies or long shadows overhead?
JOIN US AT THE BSA
Tuesday, March 27th!  at The Board of Standards and Appeals
Hear opposition and applicant testimony and add your own voice!
CITE from our linked precedents,
COMMEND the DOB for seeing the light, and
DEFEND our neighborhood!
The session begins at 10am and the full schedule will be released in the coming week.  The hearing will be held in Spector Hall at 22 Reade Street near City Hall.  (Seating is limited and the building has a security screening process, so plan accordingly!)