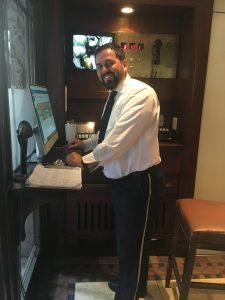 Sammy Radoncic on duty at the Oliver Cromwell

Less flamboyant and far more discreet than the Dakota across the street, the Oliver Cromwell at 12 West 72nd Street, has maintained its dignity throughout the decades.  Sammy Radoncic, the Morning Doorman, has worked at the 1926 Emery Roth Italian Renaissance-influenced building for 20 years.

Sammy’s top priority is his family.  After that comes the building and its residents. “I love my job” he says. “The interaction with residents is what makes the job so pleasurable.” College educated; he learned the specifics of his work overtime on-the-job.

About communicating with residents, for example, his inclination initially was to be formal, to call people Mr. and Ms., “but the people who live here, they say, “call me John or Mary,” he explains.

More than that, many enjoy chatting with him and like the fact that he knows their pets’ names and schedules.  One recent morning, he asked a resident when her dog would be returning from her grooming appointment and the pet’s owner joked that the budget for dog’s grooming is larger than her own.  “That’s Manhattan,” they agreed.

Another resident likes to stop and talk sports with Sammy.  “When he comes down to get his coffee, we talk about baseball or football,” he says.

Over the years Sammy has been in most of the apartments to assist with moving a piece of furniture or help with a repair.  Some apartments are truly amazing.  “When some of the residents like their apartments, they wait until the one next door becomes available.  Then they put two or three together.”

Anything unusual in the historic building?  Well yes, 10 to 15 years ago when renovations were being made to the front lobby elevator area, workers found that wall reliefs and other art work had long been covered over with plywood.  Once the multi-colored decorative work was discovered, it was restored.  It’s very beautiful,” Sammy says.

Union benefits after 15 years have earned him 4 weeks vacation.  Now, at 20 years, it’s increased to 5 weeks a year. “I go away with my family whenever I can.  Usually it’s to my country,” he says, referring to Montenegro in the Balkans.

Sammy says his parents left him and his younger brother in their grandparents’ care while they came to New York to seek a better life. Sammy was ten when he came to the city to join his Mom and Dad.  His father was a superintendent in a West End Avenue building and he later became the building manager for a group of five buildings in Long Island.  While still in college, he was offered a full-time porter job in a building on West 79th Street, but the person he would have been replacing, decided to stay.  Fortunately, the management of that building also managed the Oliver Cromwell and hired Sammy for a job there.  The hours have allowed him to spend much valued time with his wife and sons.  “I’ve coached soccer and I go fishing with my sons whenever we can.”

The work and communication with residents is almost non-stop from 7:30am to 2:30pm most days.  It’s clear that as much as Sammy likes the residents in his building, they very much appreciate him. 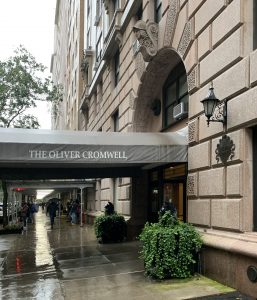 Entrance to the Oliver Cromwell