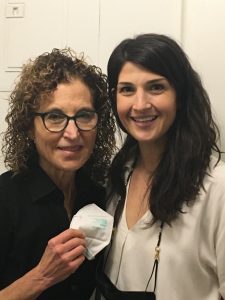 How is it working with her daughter?  “The best in the world” Ann Lang, MA, OTR, CHT, responds with a smile.  A pioneer in the field of hand therapy, a subspecialty of Occupational Therapy, Ann began her career at Jacobi Hospital and provided home care throughout the Bronx.  She achieved her accreditation in Hand Therapy during the inaugural year that the Certification exam was administered, distinguishing her as an expert in the field of hand and upper extremity rehabilitation.  Ann has been in private practice on the Upper West Side for nearly four decades, first on 86th Street and CPW, and for the past 12 years at 263 West End Avenue.  Ann’s daughter Ashley Satenstein, MS, OTR, CHT, has worked with her mother for the past five years.  She clearly admires Ann’s skill and energy, “My mom is amazing.  She has worked most of her life and her achievements in the field are a testament to her commitment.”

The Lang Hand Therapy office is bright, airy and inviting.  Services are in demand from morning till night, during the week and on Saturdays.  Conscientiously scheduled to ensure distancing during the Covid period, patients stream in for a wide variety of upper extremity problems.  “From fingertip to shoulder,” is how Ashley puts it.  Some cases are complex and unusual.  The tendons on one young woman’s hand for example, were misaligned. Following corrective surgery, Ashley and the patient are working on exercises to maximize flexibility, strength and optimize functional use of the patient’s hand.  Another patient was shot in the hand. Thankfully, the bullet did not cause catastrophic damage, but the patient still needed extensive hand therapy to restore full motion and strength.  Other, more usual problems occur in hand therapy patients.  Some are dealing with recovery of finger, wrist and arm fractures, others with arthritis and tendonitis.  Of late, there has been an uptick in patients working from home in makeshift, non-ergonomic settings (like the dining room table) resulting in repetitive strain injuries involving their hands, wrists and arms.

While Ashley and her younger brother were growing up, they lived with their mom and dad, a dentist, in Westchester, NY.  Ashley says Ann’s billing office staff worked in the basement of their home and that she always knew that her mother worked but was a mother first.  The first time she recalls being aware of how Ann helped people recover from major injury, was at the age of around eight.  She was visiting her mother’s office on a “take your-child-to-work day” with my backpack full of Barbie dolls.”  While there, she met one of her mother’s patients, a young girl around her age whose arm had been crushed in a horrible car accident.  “But she wasn’t a patient to me, just a girl who wanted to play Barbies.”  Ashley was also proud that her mother took the time to participate in career days at school.  “She would splint up the hands of kids who volunteered, reminding them to tell their own parents that this had been part of a demonstration at school and not the result of an accident.”

Ashley, a competitive basketball player in high school, was recruited to the University of Rochester.  Dropping basketball after her sophomore year, she began volunteering at a local Rehab Center.  She went on to earn an MS in Occupational Therapy at SUNY Downstate, then worked in a hospital-based setting for five years before eventually joining Ann’s practice.  Ashley and her husband, a businessman, are parents of an eight-month-old daughter.

Both mother and daughter say there is a psychological component during the rehabilitation process that speaks to the patient’s acceptance of their part in getting well.  “You’ve got to get through the head to get to the hand,” is how Ann puts it.  “After a few weeks, they can start to see the progress and realize there are better days to come.”  Also, both Ann and Ashley say that in their profession there is nothing more rewarding than watching a patient get better.  “Even with masks during this pandemic period,” says Ashley, “You can see it in their eyes, when they start to sense their improvement.  It never gets old.”

Maintaining very full schedules, the mother and daughter often only have a moment or two during the workday to share a word.  But the mutual admiration and respect is clear.  “Ashley was never pushed to go into occupational therapy or hand therapy.  But when she came upon that decision on her own, and as I’ve watched her develop into a gifted clinician and insightful business associate, it has been tremendously validating as a working mom. And now watching her juggle work with mommy-hood really feels like we’ve come full circle.”