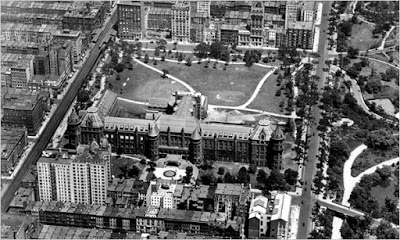 No man is justified in doing evil on the ground of expedience
Theodore Roosevelt from “Latitude and Longitude among Reformers” (1900)
Kate Wood addressed a letter to American Museum of Natural History President Ellen Futter outlining some of the community’s concerns regarding the museum’s first proposed expansion in the the footprint of Teddy Roosevelt Park since the 1934 construction of the Hayden Planetarium.
The new expansion, slated at 218,000 square feet according to their project website is no small volume.  It has the potential of disrupting several mature trees, and occupying one of the key gathering spots for the community, in one of the leveled areas of the rolling park at 79th Street.  The letter demonstrates both environmental and community assets at stake, and outlines the concerns of LW! with regard to this proposal as it currently stands.
We will keep you up to date as further details emerge about this proposed six-story expansion of the museum.  If you wish to get involved, you may do so by engaging with some of the neighbors who are watching this issue very closely.  These include the Friends of Roosevelt Park and the Defenders of Teddy Roosevelt Park who have a petition here.