We interrupt your day with this important announcement: Following the July 2018 news that the American Broadcasting Company (ABC) is leaving the UWS, LW! explored development potentials.

What’s the Big Deal? ABC has been an UWS neighbor since 1948 and was given special commercial use permissions for its campus, allowing them to run a flagship television station. Now that they are vacating the site, it is important that the underlying zoning return to conform to that of its neighborhood. A Zoning Map Change would remove the exception granted only to ABC and return the block to the intended zoning for all the Special Lincoln Square District (SLSD). This would not take one square inch of buildable floor area from a developer, but rather change how the floor area can be amassed on site.

ABC currently occupies 2.4 acres on this block! What does that mean? See for yourself:

Please note, these slides represent potential “Reasonable Worst Case Development Scenarios” (RWCDS). They are not intended to be actual buildings but reflect allowable Floor Area massings under existing and proposed conditions. Developers are already using unintended zoning loopholes to build like this on the UWS. Learn more about our method here.
Landmark West’s application is now filed, and was heard at CB7’s LAND USE (cue 1:28:10) meeting this past Wednesday. We go to the FULL CB7 BOARD on Tuesday, May 4th where they will vote on whether or not to join LW! as co-applicants.
MORE details & full history of this issue on our ABC WATCH page.

Change can be good:

The nominal map change proposed in this application is diagrammed above.
LANDMARK WEST! is taking this action to be proactive about zoning and the community interest. We all know how difficult it is to fight developments once they’ve started, even if their height is an abuse of zoning that should never have been allowed. Below is the potential view standing in Central Park. The building on the left is the potential 50 West 66th Street, which is trying to use false “mechanical void” floors to push up nearly 200 extra feet. We are fighting it and our legal oral arguments on that issue begin in May.
The other two buildings are what could go up on the ABC lots if zoning is not returned to what was intended for those blocks. Just imagine fighting those – or looking at them forever. 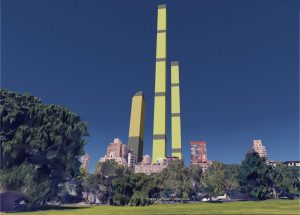