North Carolina Plantation to the UWS 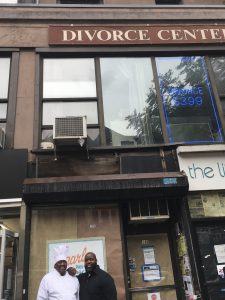 Charles Gabriel, long-time chef and Harlem based restaurateur, is bringing his very special, lightly crusted pan fried chicken to 144-146 West 72nd Street.  The mostly take-out soul food specialty restaurant, Charles Pan Fried Chicken, slated to open in September will also have some outdoor seating. This can’t happen soon enough for locals who have been stopping by regularly to check on the progress of the renovation.

Among Charles’ biggest boosters is Quie Slobert, the enterprise’s COO who was born in Harlem and grew up in the Bronx.  Although the two men only met a year ago, Quie says he remembers Charles’ cooking from Copland’s soul food restaurant as a child since it was where all his family’s celebrations were held or alternatively ordered in. Eventually, Quie became a chef and earned a business management degree from Berkeley College.  He also has a gift for a memorable phrase: “Soul food is love. We’re bringing soul to the Upper West Side,” he says.

But, going back many decades before Quie entered the picture, Charles was born in Charlotte, North Carolina, one of 20 (12 brothers and eight sisters.)  The family was raised on a cotton plantation where his parents and siblings lived in a small shack on the property where they picked cotton.  Charles learned from his mother not only how to grab, kill, and pluck, but also to pan fry chicken.

After completing high school, Charles came north to Harlem to work at one of his brothers’ restaurants and worked in supermarkets.  From there he began working at Copland’s as a Chef. Interested in starting his own business, he began getting up in the early morning hours, and selling bountiful meals from a table set up on the sidewalk near a park on 153rd street and Amsterdam Avenue.  It was not far from where he lived in a brownstone on 152nd street between Broadway and Amsterdam.

After four months, a woman in the neighborhood supplied Charles with a van and favorable terms to pay it off.  Over the next five years, mobility was a big boost to his business. “I took the van to the welfare center, post office and barbershops,” He started cooking at 5:00AM, went to work at Copland’s and then over eight years, managed the van from 5PM-11PM.”  Charles recalls that over time, he realized many of his enthusiastic customers were having trouble locating him on a particular day.  “He needed bricks and mortar.’” says Quie.  Charles opened his own place, and moved around to various nearby addresses over the years.

Most recently, he closed the Harlem location and scheduled openings of new enhanced Charles Pan Fried Chicken restaurants:  One is scheduled to open in August at 145 Edgecomb Avenue followed by the venue on 72nd Street and a third on 125th street and Morningside Drive that is planned for December.  All will serve the full menu. During the pandemic when the long-time restaurant was closed, Charles cooked for the needy at the Salem United Methodist Church on Adam Clayton Powell Jr. Blvd.

Both Charles and Quie emphasize the superiority of pan fried chicken compared with deep-fried, which is often greasy and less healthy.  It’s also less authentic according to Charles explaining that “we didn’t have pots to deep fry.  Everything was made in one pan.”

Lovers of soul food will be happy to know that the all fresh menu in addition to chicken, includes classic sides and vegetables made without animal products to comply with vegan preferences.  Seafood and salads are also on the menu. There will also be typically Southern desserts like peach cobbler, red velvet cake, sweet potato pie “and of course banana pudding,” says Quie.  While no liquor will be served, count on sweet tea, strawberry lemonade and just plain, delicious thirst quenching lemonade.