An UWS Highlight by Claudie Benjamin 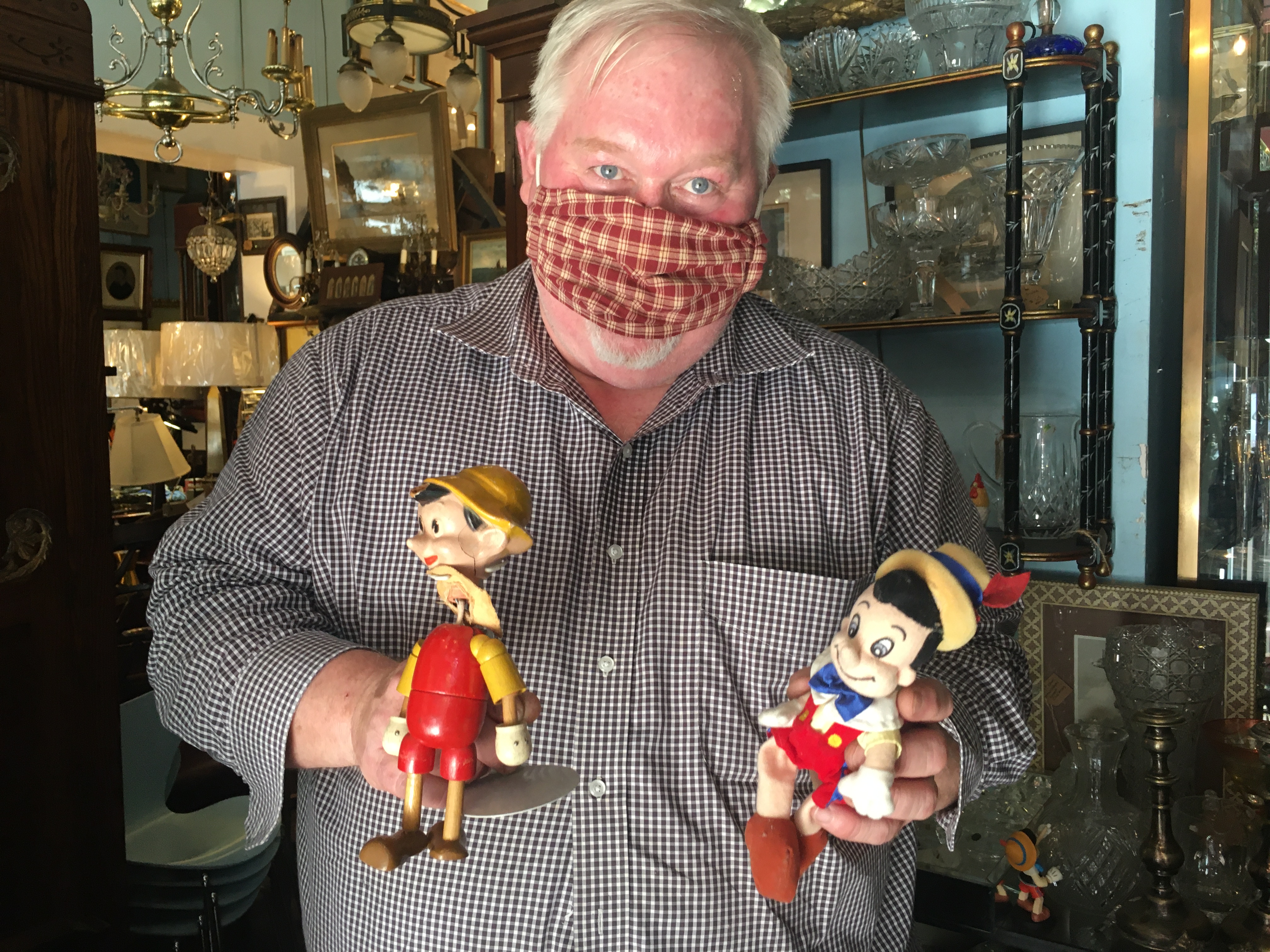 John Koch, a long-time specialist in buying and selling the contents of estates, has a deep love and affinity for the Upper West Side.  He admits, “I literally have to be dragged away to cross the park.”  He has maintained a shop at 201 West 84th Street for over 15 years, after owning a similar business in Chelsea.  How did he make the eventful move to the UWS?

He was actually invited by the landlord to move his business to its current location, the ground floor of a six-story walk-up.  The space had previously held an antique store and they enjoyed having that type of business in the storefront. Meanwhile, Koch’s lease was up and rents were soaring downtown. “He had a vision and we fit that,” says Koch. A win/win situation.  Since that time, Koch feels he has become truly a part of both the block and the neighborhood. The store is especially known for its over-the-top Halloween window decorating.

Generally speaking, Koch is unenthusiastic about the relatively homogenized tastes he believes have defined home furnishing and decoration on the Upper East Side.  Guided by “trends driven by primarily beige shelter magazines with abbreviated titles,” homes of the 1960’s, 70’s and 80’s featured pieces upholstered in similar designer-brand fabrics; furnishings that leaned heavily toward French Provincial; and “investment-driven” china, tableware and art.

By contrast, Koch finds that West Siders, whether prosperous or not, are far more diverse in their interests.  This diversity, he believes, is reflected everywhere in their lives: the books that line their shelves, the carpets on their floors, and objects they may have brought with them as immigrants to the United States or collected when traveling.

As an antiques dealer, Koch has expansive interests.  Acquiring a finely made mid-century Danish desk can be as interesting as unexpectedly coming upon a 12th century stained glass window or antique Austrian crystal chandelier. He says most of what he knows about the business has been learned on the job or is instinctive.  He clearly delights in researching the backgrounds behind what he buys and sells.  He is eloquent, for example, in describing the use of mahogany from hurricane-felled West Indian trees by early New York City furniture-makers to produce cabinetry comparable to European pieces.

Koch, who is very discreet about his clients, has regularly been called to assess the value of estates in various Upper West Side large, many roomed apartments.  He experiences, he says, the same frisson, or thrill of anticipation, when entering a building to view estate items as when hearing a mood-setting overture to a film or ballet.  He describes, for example, a visit in the 1980’s via the as yet unrenovated Belnord Service Entrance where the carriages used to come in.  “It was like exploring the sewers of Paris,” he recalls. Upstairs, some rooms were enormous. He sold one client a 13′ armoire that fit with plenty of room to spare.

Koch is clearly a romantic and historian at heart. His wealth of knowledge developed over many years encompasses world travel, furniture design and craftsmanship, literary associations, and in-depth insights into obscure rug weaving techniques.

He can also personally relate to his clients’ drive to collect. He would never sell items from his own treasured collection of Black Forest bears made in Switzerland and Germany, some acquired on the Upper West Side.  An extraordinary example acquired at an apartment on West End Avenue is a 7-foot-tall carved coat tree incorporating the figures of a mama bear and her cub beneath the outstretched realistically carved branches of a tree.  Koch says, “I tried to keep my composure as I was being shown around the apartment. But I kept going back to that Black Forest hall tree by the front door. It got so bad they asked me if I just wanted to leave.”

Many of his smaller pieces are equally remarkable.  Koch explains they were produced as souvenirs for prosperous travelers on a Grand Tour that took them around the world for months in the late 19th and early 20th centuries.

So, Koch, deeply familiar with the culture of collecting, was wonderstruck, but not shocked, when called to put a price on a collection of over 500 Pinocchio figures that had been gathered by a couple (a teacher and well known government official).

Another couple had amassed an extraordinary collection of items, mostly children’s books but also building blocks and other objects, that came under the category of “ABCs”.  The seller’s reason for parting with them all? After his wife, who had collected the ABC books, passed away, the collection simply “held too many memories”.

It’s not only unusual, specialized collections that Koch buys and sells.  Most often, it’s the entire contents of an Upper West Side estate where he sometimes finds one treasure among many fairly mundane items.

Early on, he put a price tag of $2000 on a lovely rug he thought had possibly been bleached by a decorator.  It turned out to be a rare piece woven in Agra, India circa 1900 that brought $125,000 at auction. “I was younger and less experienced. The seller was from the Far East and required the apartment be emptied in three days for the painters.”

Talking about his general approach, Koch says, “We don’t buy from walk-ins and we don’t sell coins or jewelry because rule number one is that gold brings guns and we’re not set up for that. We source-out the most valuable items because our store is an estate house which represents things from every part of the home, so people don’t expect to encounter downtown pricing. As a result, certain items are sent to local auctions.”

Koch is proud of offering a wide variety of affordable bits and bobs: “Prices start at $5,” he says.