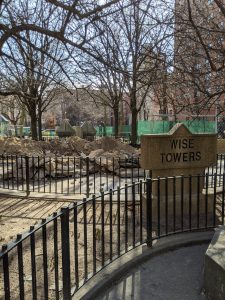 Pact Renaissance Collaborative was recently named the new management company overseeing the NYCHA-owned Stephen Wise Towers.  They have outlined a substantial remolding campaign for the buildings, tenant units and grounds.

During the first week of March, 2021, Pact Renaissance Collaborative undertook work in the outdoor recreation area.  Originally opened in 1963, the public space was designed to include several Nivola-sculpted elements deployed across the through-block plaza site.  A concrete wall, a harras of horses, a sgraffito mural and a fountain were all carefully positioned on site to define distinct areas for different types of enjoyment.  The first phase of the work unfortunately resulted in a cavalcade of the horses off the site.  Initially their legs, already shortened by years of plaza repaving were chopped from their bodies.

Reportedly in storage to be redeployed around entrances, closer to the building, initial inquiries revealed that management was undertaking efforts to install new playground equipment where the herd of horses peacefully gathered for 57 years.  This was before the public learned what had transpired.

Subsequent coverage from THE NEW YORK TIMES, CURBED, PATCH, the West Side Rag, has helped garner international attention via the Italian Cultural Institute of New York.  International coverage includes ANSA Arts Culture & Style.  According to the TIMES, this was due to a “water main break” but last we checked, NYCHA wasn’t responsible for water mains…and after the recent events, not horse manes either!  LANDMARK WEST! is working with our colleagues to see these horses not only returned to their original locations as intended by artist Costantino Nivola, but hopefully repatriated with their legs, restored, and finally appreciated!  LANDMARK WEST!  worked with Council Member Ben Kallos and with funds from the Cultural Immigrant Initiative, provided the residents of Stephen Wise Towers with activity kits and built a dedicated page to celebrate the legacy of Nivola in the Naayyborhood!

We hope to use this unfortunate circumstance to work with NYCHA, and other city agencies to help them better understand, protect, and care for their cultural assets. 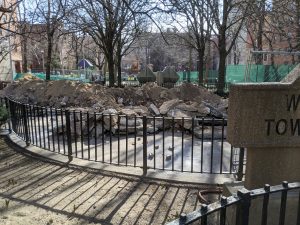