On February 18th, architect and LW! friend Lee Harris Pomeroy passed away.  His full obituary is available in the New York Times. For many years, Mr. Pomeroy was an Upper West Sider, and he did great things for our local landmarks.  He left his mark city-wide, but specifically on the Upper West Side in his renovation of the 66th St/Lincoln Center 1 station and the St. Urban on Central Park West.  While we have many of our Newsletters on our website, our Fall 1994 edition only exists in print.  That issue featured a piece by Kathleen Randall on the St. Urban.  We have reissued it below as a tribute to our lost friend.

The St. Urban: Restoration and Innovation Under One Roof

At the top of the St. Urban’s tower are three elaborately framed bull’s-eye windows.  For the first 87 years of their existence the windows were fake—frames with solid fill and opaque glass.  Now beautifully restored and glazed with clear glass, the openings provide light and Central Park views to the library of a contemporary apartment tucked within the corner dome and massive mansard roof.  This sensible and splendid transformation suggests two things; first, attic space was not prime real estate at the turn of the century, and second, landmark designation and innovative change need not be mutually exclusive. 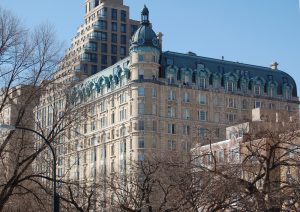 The 1906 arrival of the St. Urban at 89th and Central Park West (CPW) marked the start of a boom in luxury apartment construction on the park’s western edge.  The 12-story steel frame building was clad with limestone, white brick and terra cotta, yielding a buff-colored mass that dominated its surroundings. While the St. Urban is a fine example of American Beaux Arts architecture, its architect, Robert T. Lyons, borrowed generously from the more flamboyant neo-baroque forms of the French Belle Époque—or possibly more locally from the recently completed Ansonia or the Dorilton apartments nearby on Broadway.  The glaring luxury and exaggerated, almost theatrical surface detail that characterized architecture of the Belle Époque reached its height in the hotels, villas and casinos of the French Riviera after the turn of the century.  This influence, evident in the St. Urban’s high mansard roof, domed corner tower, porte-cochere, billowing curves, and overblown dormers, sets it apart from its more sedate neighbors.

Landmarked as part of the Upper West Side/Central Park West Historic Distric, the St. Urban is a striking example of how landmark designation can both preserve and protect historic architecture and accommodate change.  Inserting a modern apartment within the roof space required some innovative alterations—alterations that coexist with the co-op’s impressive record of exterior and interior restoration.

The new apartment is the home of Sarah and Lee Pomeroy, longtime residents of the building.  By assembling laundry space, a small apartment, a maid’s room, unfinished space under the dome, and a roof air rights, Pomeroy, and architect whose firm works regularly with historic buildings, tucked a 3,000 square foot, two-level apartment into the North and East portions of the tall mansard roof.  The circular corner tower acts as a hinge linking the two wings.  Within its confines is a stunning multilevel library for Sarah, a classics scholar.  (See “books in the Belfry” New York Times Magazine, 1/23/94.)  After going through the appropriate Landmarks Preservation Commission channels, Pomeroy removed the small and poorly placed windows cut into the roof in the 1960s and replaced them with large windows partially hidden behind the dormers.  On the South and East exposures, clerestory windows and a double-height greenhouse wall bring light from the formal terrace garden into the apartment.  Views from the windows facing uptown or toward the park are embellished by fragments of the elaborate copper dormer cresting visible in the immediate foreground.  This planned feature will forever distinguish the experience of living at the top of the St. Urban from living on the 13th floor of the 1989 building next door; a building that incidentally replaced a significant early twentieth-century structure that housed the Walden School.

In 1989 the co-op launched a $750,000 reroofing project that replaced a 1960s asphalt roof with copper shingles.  While not original to the building, cooper is a period material chosen partially for its weight savings over slate, the as-built material.  The new roof was the beginning of an ambitious restoration program that included copper repair on the dormers and lantern, removing paint from the building’s three-story limestone base, an exterior cleaning, and painting the window frames.  The frames had been painted black since the 1920’s, presenting a hard line against the buff-colored façade.  Rather than simply repeat black, the co-op commissioned a laboratory paint analysis that identified the original color as a light taupe, the color of the limestone and brick, which was then used for the repainting.  Recently the St. Urban has presented a rather naked entrance due to its missing canopy.  The ailing pitched-roof canopy was not original to the  St. Urban and photos that revealed this fact are being used to fabricated a new glass and steel canopy that replicates the original.

The St. Urban’s merits are two-fold: innovation under the roof, plain and simple care and restoration all around.  Credit is due the shareholders, whose interest in protecting what the St. Urban means to CPW and the city have made these transformations possible.  The transformations highlight small details such as the light the Pomeroys installed in the lantern to further the tradition of illuminated landmarks along the avenue.  Next time you encounter this beacon think of the St. Urban as CPW’s turn-of-the-century kick-off.  Whether here or on the Riviera, the Belle Époque forms celebrated self-assurance, prosperity and energy at a level that has never quite been equaled.