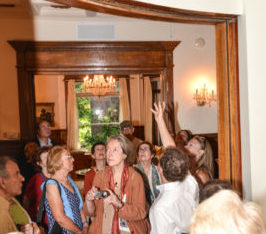 The owners of 351 West End Avenue have spent the better part of 20 years undoing decades of damage to restore it to an elegant single-family home. Now on the market, LW! teamed with their broker, Corcoran’s Deanna Kory, for one of a new series of open houses featuring remarkable historic properties. Architectural historian and Columbia University professor Andrew S. Dolkart led a captivating tour for LW! and Corcoran guests of this beautifully restored 1891 rowhouse designed by Lamb & Rich.  Read and view more photos in “Preservation Pays” (page 5).

The property occupies one of only two blocks on West End (the other is 90th to 91st Street) that survive with their original lowrise character. Prof. Dolkart explained: “This is a remnant of what West End Avenue was. I think we forget that West End Avenue, from 67th Street to about 106th Street, was 75-80% single-family homes in 1900. They were replaced by apartment houses [in the 1910s and 20s]. It was a shock to the real estate community that houses built just twenty years before were being torn down.”

Professor Dolkart attributes the seemingly miraculous survival of 351 West End Avenue, and its neighboring rowhouses on both sides of the street, to restrictive covenants that prevented its demolition and replacement during the building boom of the early 20th century.

Taking care of our architectural heritage is a responsibility we pass down from generation to generation. Laws help, but people are the most important link in the chain that connects the past to the present to the future. The Upper West Side is the Upper West Side – literally one of the most beautiful, livable and valuable places on earth – because of buildings like 351 West End Avenue.