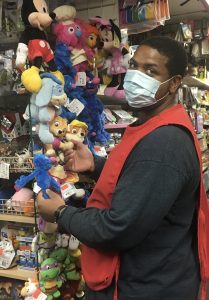 Donna Schofield, owner of Stationery & Toy World first met Gary Rowe when he was sent over by an employment agency that specializes in referrals of young people who have gotten into trouble and then completed rehab programs. “I tell the guys who apply, ‘It’s like a marriage.  If we don’t get along, if you’re not happy and I’m not happy, it doesn’t work.’  I liked that Gary was eager.  I liked that go-get attitude.”   As Gary put it, “She gave me a shot.” And, to say the least, that shot at a job and his own perseverance worked out.  Now, 15 years later, Gary who had been a vendor of peanuts, and beer at Yankee Stadium prior to working at Stationery and Toy World, cannot say enough good about his incredible bosses Donna and her now retired father Larry Gomez.

Learning about toys was the relatively easy part, Gary says, “because I’m basically a big kid.” The stationery side of the business was more of a challenge.  But, overtime, thanks to the unending patience and training skills of the father and daughter store owners, he mastered the complexities of ordering, receiving and keeping track of the huge inventory. “After my father retired, he’s my new right-hand man,” says Donna.

Gary grasped the importance of communicating well with customers who frequently request advice about their purchases.  Gary gives an example in the context of how toys have changed.  In the past, the name of what was in the box pretty much identified its contents.  Now, children are fine with having a surprise item that requires instructions or even a YouTube demo, “but a parent may want an explanation of what Pokémon is and what it does.”

Today, one of Gary’s children has graduated from college, another is completing college and his three other children are 10, 7 and 5.  Has he gotten discounts on toys over the years? “What do you think?” he answers.

Purchasing a specific notepad or a spiral notebook may be more complicated than a customer expects because there are so many kinds, Gary continually informs himself about these items.  Ditto regarding pens, art and school supplies. “People call the same supplies by different names.  “I grew up needing poster board for school projects.  Some customers come in asking for sheets of oak tag.”

Gary says the attachment and support the local community has been offering Stationery World and Toys during the Covid period has been impressive.  “Customers have called in just to ask how we’re doing.” The caring has been mutual. Though business is down 50 percent, led by Donna, stationary supplies continue to be delivered free during the pandemic. She has contributed materials to homeless shelters and partnered with local schools.

The staff rotate certain responsibilities like opening and closing up for the night, but Donna is very hands -on, leading by example.  “We have a generous summer break and two days off a week.  But, If she needs me, I come in,” says Gary.