Romance of an Eclectic Venue 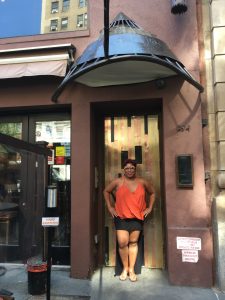 Thursday Sugar Bar Open Mic nights have remained vibrant these past months.  Undaunted by Covid challenges and restrictions, these exuberant sessions of talk, music and video clips have gained thousands of viewers via Facebook.  Singer Songwriter Valerie Simpson along with a changing roster of co-hosts, introduces performers from the Sugar Bar at 254 West 72nd Street, while artists present their music from their homes.

The feel inside the Sugar Bar is exotic and the mood is chatty and familiar – friendly with a lot of laughter.  You are invited to be part of the Sugar Bar family experience as an insider.

While not an in-person experience, the virtual open mic Thursdays, comes close to bringing the viewer into the fold.  The virtual entertainment is free and watched comfortably anywhere on the device of choice.  Now, “in-person” is expected to return to the Sugar Bar.

The restaurant and performance venue was opened at 254 West 72nd Street about 25 years ago by the iconic songwriter/singer duo Ashford & Simpson.  Best known for hits they wrote including “Ain’t No Mountain High Enough” and “Ain’t Nothing Like The Real Thing.” The couple won many awards for the music they performed and the songs they wrote that helped make names for numerous other performers.

The couple got to know restaurateur Bobby Ochs and partnered with him on a restaurant called 20/20 downtown. Enjoying the restaurant business, they opened their own place: The Sugar Bar.

Nicole Ashford, one of the couple’s two daughters, became involved with management of the restaurant in 2000, a few years after she graduated from Wesleyan. “I was looking for something to do.”  She says the restaurant’s decor reflects her father’s interest in Africa where he acquired various art and other artifacts displayed at the Sugar Bar.

Ashford passed away in 2011, since Valerie has continued to maintain an important role, bringing her exuberant personality to the Sugar Bar, which, continues to be managed by Nicole along with Hugo Astudillo and Steve Abreu.

The Sugar Bar‘s atmosphere is distinctive and enticing, beginning with the unusual hut-like outdoor shelter constructed when pandemic restrictions started allowing outdoor dining. The entry to the hut is flanked by two stone tigers.  Inside, the theme and the menu combines influences from Africa, the Caribbean, Latin America and US Southern cuisine. Nicole says a menu favorite is broiled New Zealand lamb chops.  Promotional info reads “…a little Cajun, a little soul, a little Latin, a lot of delicious!”

The Sugar Bar was and continues to be a place for the celebration of music and the enjoyment of good food. Asked if she enjoys the Sugar Bar as a place she’s had the chance to meet and get to know many people, Nicole says yes, in fact she and her fiancé met there two years ago, set up by a mutual friend.  The romance of the place continues. As in the lyrics of “Solid as a Rock“, one of Ashford & Simpson’s hit songs, “That’s what we’ve got…solid as a rock.”