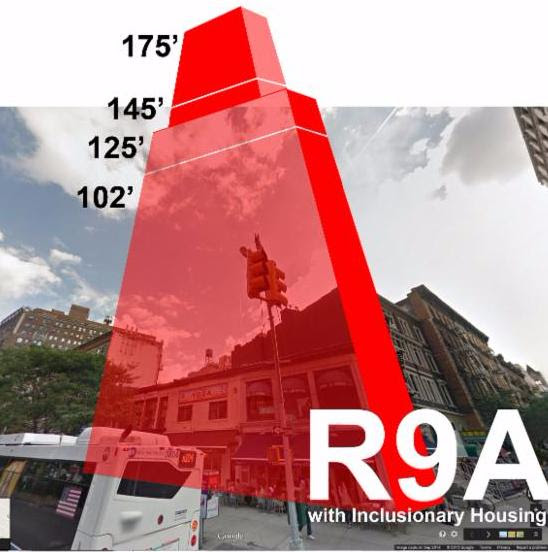 Heights will be increased from 14 to 17 stories for Broadway buildings that contain some “affordable” units (details below).

Seeing Is Believing
We’re still in the process of wading through the 496 pages of zoning text amendments released to the public over the weekend… two days after the March 17, 2016, New York City Council committee-level approval of Mayor de Blasio’s proposals
—
Zoning for Quality & Affordability (ZQA) and
Mandatory Inclusionary Housing (MIH)
—
Communities across the city rejected these sweeping zoning changes and remain concerned about the lack of explanation and outreach on City Council’s “deal” with the Mayor.  The full Council is scheduled to vote both proposals into law today, March 22.
—
Here’s some of what we see so far in the 496-page zoning text “dump” and how it will affect our Upper West Side neighborhood:
—
ZQA

—
These are all significant changes to the proposals originally introduced by the Department of City Planning, with the strong support of the Real Estate Board of New York and others.  But note:  It took almost exactly ONE YEAR of aggressive grassroots advocacy, “NO” votes from nearly every Community Board throughout New York City, and Council Members seeking to protect their own districts to reshape the Mayor’s tone-deaf, “one-size-fits-all” zoning changes.
==
Is this the way to introduce policy that has been touted as the most ambitious housing plan in history?  No, it is GOVERNMENT IN THE DARK.
—
Will it result in increasing the supply of much-needed affordable and senior housing for our city and creating the necessary infrastructure to support it?  Time will tell, but we fear not, given the confused, opaque public process and frustrating notion of Zoning = Planning.  Upper West Side Council Member Helen Rosenthal, who announced her support of ZQA and MIH, states, “ZQA and MIH are just two tools of many that will be necessary to address our affordable housing crisis.”
—
But Mayor de Blasio says “The work is done” (New York Times, 3/17/16), explaining why he abruptly closed down the slush fund set up to push his affordable housing plan (under fire for potentially violating conflicts of interest and campaign finance rules).
—
The saga of ZQA/MIH is a sobering reminder of how we must remain ever vigilant to defend the character and livability of our neighborhoods and city as a whole.
—
Finally, THANK YOU to everyone who signed up, showed up, and spoke up!  You are the true heroes.  About that, we have no doubt!
—
See you in the trenches.
—
To learn more about this legislation, catch up on past news from our WATCH BLOG