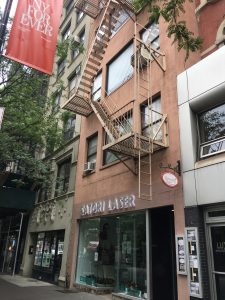 One day in 1982, Patricia Ripley, co-owner of Creative Energy Exercise Studios at 133 West 72nd Street and former manager of the Lotte Berk Method (an Upper East Side exercise salon) stopped in for a bite at Captain Nemo, a seafood restaurant located on West 72nd Street.  She had moved to Manhattan in the early 70’s from the Jersey Shore where she had attended Monmouth College, managed nightclubs and worked with Bruce Springsteen in Asbury Park. The manager of Capt. Nemo, Butch Grier worked there since riding his motorcycle up from Tulsa, Oklahoma, and was a stuntman and actor.

Patricia noticed a motorcycle outside the restaurant and asked him “Is that your motorcycle out there?”  He answered, “Yes, do you want to take a ride for a couple of days?”  Whew!  That was almost 40 years ago.  They joined forces to build a relationship and a business of studio space rentals.  When she split with her partner at the 133 exercise studio space she met a contractor on the street in front of 131 and asked him “what are you building?”  He said “rehearsal studios.”  She said “What is that?”  He asked her what her background was and then offered her a job and a place to teach her classes.  When that contractor defaulted on the lease, Patricia and Butch negotiated with the landlord and opened the West 72nd Street Studios in 1987.

They first lived in one of the fourth floor studios and then a second floor studio—they could not afford an apartment. They spent four years cleaning and running the business themselves.  Since then, they have built a family business that now engages their son Shayne and his family as well as their daughter Jeannie, who just graduated from Hofstra University.

Back in the 80’s the West Side neighborhood was rough and seedy in spots but filled with artists, musicians and dancers who needed practice space. West 72nd St. Studios continues to serve as a hub for professionals who need practice space larger than their apartments. Over time, a growing number of families moved in who were interested in enrolling their children in arts classes offered by local instructors.  Few places were available, but West 72nd Street Studios filled the bill.

Patricia and Butch found their clients kept asking for larger spaces and so in 1990 and 1999, they expanded and decided to use their last names and became Ripley-Grier Studios. Now they have four locations in Manhattan and 92 rental rooms.  After 30 years in Manhattan, they decided to raise their daughter in Long Beach, Long Island.  So, they moved out and now commute into the city to work.

Ripley-Grier Studios shuttered in March of 2020 but was able to re-open the West 72nd St. Studios in July 2020.  On June 1, 2021, they re-opened the last of the four studio locations.  Business is slowly returning as Broadway opens and folks are feeling safer coming out. “We tried to retire but with the current challenges we feel we need to get the business rolling again.  We provide clean, sanitized and ventilated spaces for our clients to feel safe and welcome.”

Patricia and Butch see themselves as having been active participants in bringing the Upper West Side out of the decades of doldrums that persisted into the 80s.  Now again they are proud to be part of the UWS resilience by providing space, a high demand commodity for artists, musicians, dancers and teachers who need professional spaces to hone their talents.