State to the Rescue 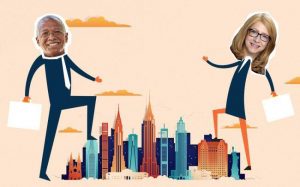 Image via The Real Deal

In the wake of disappointing results from the Department of City Planning, particularly in their vote to expand their giveaway of 25′ of mechanical void space for every 75′ of program rise to now a 30:75 ratio, LANDMARK WEST! has been working with fellow advocates on a real solution that will seek to not only address the problem but return predictability to NYC planning and development.  State Assemblywoman Linda Rosenthal has introduced such a bill with State Senator Robert Jackson.  The bill, A05026 would calculate based upon a percentage of overall floor area, and, unlike the City’s Zoning Text Amendment, this bill, set to impact the Multiple Dwelling Law would recognize floor to ceiling heights–something the City has been wont to ignore.  In practice, this bill, if enacted, would curb the abuse of zoning displayed by the developers on West 66th Street where they carved their 161′ void into three semi-equal spaces by expanding the contiguous floors above and below, but also turned the 15th floor to mechanical use as well, expanding the overall mechanical area beyond 215′ of the entire building’s rise!

The state’s proposal, meanwhile, has attracted more support from preservationist groups who have been dissatisfied with the city’s actions so far. Sean Khorsandi, executive director at the nonprofit preservation organization LANDMARK WEST!, described the DCP proposal as “ridiculous,” especially compared to the bill in the State Assembly.

“Maybe it comes to a head where the city is misbehaving, right,” he said, “and so it’s maybe high time that the state steps in and brings in a dose of reality.”

The Real Deal has more of the inside skinny in Eddie Small’s NYS pols are targeting the favorite loophole of supertall developers.